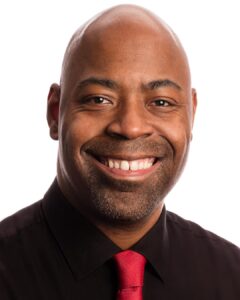 Marc L Abbott is the award-winning author of Hell at the Way Station and Hell at Brooklyn Tea. He resides in Brooklyn, NY.

It goes back to grade school. One of the things I always loved was creative writing. A lot of times our teachers would have us take weekly vocabulary or spelling words and as a homework assignment, write a short story using them. It was the one assignment I always excelled in. I remember in 4th grade we had a teacher who would read us a chapter each week from a Hardy Boys Mystery then have us come up with a narrative of what we thought was going to happen next. From then on, I fell in love with writing and storytelling. I used to have a composition notebook I carried around just for writing stories in. It was more fan fiction than anything, my version of movies or stories I had seen and read. My “original” take on those concepts and ideas.

What was it that drew me to the horror genre? That credit goes to my father because he not only introduced me to movies and stories, he had a way of telling me about horror stories that made me just want to know more. For example, my father’s explanation of Dracula before we watched it was that he was a monster who drank blood by biting people in the neck but then he started to tell me how he slept in a coffin and could turn into bats and wolves (I was fascinated with metamorphosis as a kid) and the only way to stop him was. . . that’s when he stopped talking. So of course I became curious and fascinated. With Frankenstein, it was a scientist who brings the dead back to life. How? He wouldn’t say. So the fascination also with the living dead started as well. He got me the books and watched the movies with me and we talked about them. We were good until the slasher era and he bowed out after that but I couldn’t get enough of horror by then.

It depends on the type of story I am going to write to be honest. Most of my work has an African American in the role of the protagonist or at least, that’s how I see them if I don’t get too in depth with description of the individual. But if there is a message I’m trying to drive home or if there is a subject matter that is fueling the story then, yes, I make it a point to include African diaspora characters. In one of my more recent works, the theme of gentrification and the effects of tenant displacement in society has been something I wanted to bring to light. In stories where this theme is prevalent, I want to portray the charters as smart (knowlegeable about both their surroundings and those who are coming in), no nonsesnce and masters of their own destiny. They are never the ones who can be easily folled or taken advantage of.

This might sound a bit clichéd, but horror has taught me that there are real monsters in this world. In horror they hide behind allegories but they do exist. Whenever I have to do research for a story, I always stumble across something real that was the basis for some monster people have grown to love. Like I’ve found that in religion, practices are often twisted around to the point that monsters and evil forces are created in an effort to explain why people believe what they believe. This then leads to a distorted look on otherwise beautiful and meaningful practices. As it pertains to myself, it’s taught me to go beyond just the stories I am familiar with and dig deeper into other cultures and other concepts when it come to creating a new narrative. I feel I’ve become more open minded to other horrors but also it has taught me to look at my own past and culture and discover so much more rich history that I never knew existed and through my work, use it to present to my readers.

A while back I was telling a friend of mine about all the horror films and stuff I grew up with that now, when I go back and look at it, has a complete different vibe to it now. Some of it I can’t even watch now because I have grown up seeing the world with a different set of eyes. So when I think about the horror over the years, I have seen it move away from things like women always being branded the helpless victim, POC characters being buried in tropes and often times not fitting into the narrative and violence just for the sake violence (I’m glad we have gotten away from that torture porn craze). I think with more and more writers coming to table with more cerebral stories and seeing more work that can terrify you to the core rather than gross out, horror will continue to evolve well. And I feel audiences and readers want that.

The fact that we are seeing more of the black community being represented now than in the past makes me happy. It’s great to see that our stories and our own horrors are making an impact and audiences are taking notice. With that said, there’s always room for more and I hope to see more original concepts representing our community and taking place within our communities as well. I hope to see and read more strong protagonists in the genre and they becoming fan favorites.

Some of favorite Black characters in horror. These are the ones that come to mind (Mostly film) but I’m sure if I sat down and worked at it, I’d have more:

I don’t have a long list but I would neame the following:

In leiu of a writer I want to recommend the book Slay: Stories of the Vampire Noire

One piece of advice I would give horror writers today is write what scares you. While we all have favorite monsters and creatures, I always believe that if you tap into that one thing that scares you to the core, putting that in a story and fleshing it out, that will open the floodgates for everything else you pour your heart and soul into.

To the Black writers out there getting started, write the themes you’re passionate about in your horror. Build on them. Terrify people with the unfamiliar and stay true to the craft. Listen to that writers voice inside and tell the story you want to tell.