Black Heritage in Horror: An Interview with Sumiko Saulson 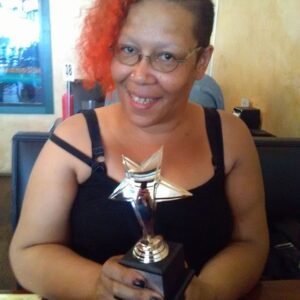 Sumiko Saulson is an award-winning author of Afrosurrealist and multicultural sci-fi and horror. They are the editor of the anthologies and collections Black Magic Women, Scry of Lust, Black Celebration, and Wickedly Abled. Ze is the winner of the 2016 HWA StokerCon “Scholarship from Hell”, 2017 BCC Voice “Reframing the Other” contest, 2017 Mixy Award, 2018 AWW “Afrosurrealist Writer Award,” 2020 HWA Diversity Grant recipient.  They have an AA in English from Berkeley City College, and write a column called “Writing While Black” for a national Black Newspaper, the San Francisco BayView, are the host of the SOMA Leather and LGBT Cultural District’s “Erotic Storytelling Hour.” and the Social Media Manager at the Horror Writers Association. They teach courses on Kink in Horror and Queerness in Horror at the Speculative Fiction Academy. Their novel Happiness and Other Diseases is coming out on Mocha Memoirs Press on March 30, 2022.

Although I started writing when I was in high school, I didn’t become serious about being a novelist until I was 42. I decided to interpret that bit in Hitchhiker’s Guide to the Galaxy about 42 being the meaning of life as a suggestion that I had now reached an age where I should start pursuing whatever it was that I thought was my life’s purpose. Not only that, but I found out that both my mother and my father had cancer in 2009 and 2010 respectively. I felt that I wanted to write while they’d be around to read what I had to say. But, I started writing poetry and journalism in high school. I was on my high school’s newspaper, the McKinley High Daily Bugle (in Honololu,, HI). And when I was 20, I was written up in the San Francisco Chronicle as an up and coming spoken word poet.

Both of my parents were huge horror fans, and I was exposed to it from an early age. I remember playing on the swings and slides in the front of the drive-in theater during movies like It’s Alive when I was maybe five or six years old in the 1970s. It was a different time – no one thought it was a problem to take a little kid to a scary movie. But right from the start, it was apocalyptic and psychological horror, such as what we’d see on Twilight Zone or Outer Limits, that fascinated me. The ending of Planet of the Apes – where they discover they are on Earth because they see the ruins of the Statue of Liberty – terrified me on a more profound level. By the time I was in 5th grade I was reading horror novels, starting with Peter Straub’s Ghost Story. As I grew older, I also found that writing horror was a good way for me to process a lot of my personal trauma, in addition to fears I think we all experience about our place in the universe as individuals, communities, and mankind.

Many of my works have African American or other African Diaspora characters in prominent roles. Two of my novels and about two thirds of my short stories have a black protagonist. And it’s not just because I feel representation is important – which I do. It’s because just as there are primal fears connected with something like the potential death of the species in Planet of the Apes or Stephen King’s The Stand, there are deep seated fears and trauma that black folks experience as a people and a culture which inspire stories like Octavia Butler’s Kindred and Toni Morrison’s Beloved. Like many African American writers, I feel a need to write about the black experience and write about characters who look like me, my mother, my brother and my cousins.

I also write multicultural stories that show the diversity of the world around us. I write stories that include people like the people I grown up around, being raised in Los Angeles and Honolulu and having spent most of my adult life in the San Francisco Bay Area, all three of which are diverse areas. It always kind of weirds me out when I see the show Friends. I wonder how they live in a New York that seemingly only has white people. And it trips me up when I read stories that take place in San Francisco that only have white people. Given our demographics, that rarely matches anyone’s lived experience of the Bay Area. So I do make a conscious effort both to include African Diaspora character and to create diversity overall in my world building.

I think that a lot of horror is about resilience. If you don’t believe that, think about the past two years and us all living through a global pandemic. Horror is about the ability of human beings (and sometimes inhuman beings) to carry on despite the fact that everything isn’t always lovely, perfect, or a fairytale. In fact, sometimes things can get pretty dark. As a person with a couple of serious mental health issues – bipolar disorder with psychosis, and post traumatic stress disorder – I think that the horror genre has given me tools to communicate my personal experience with things that most people do not see, hear, or feel. Tactile hallucinations – something I have experienced – are terrifying. But they make wonderful scary story experiences. So I have learned that I am resilient. I have also learned that my perhaps overly creative mind is a gift and not only a curse. So I guess that horror writing is for me a kind of madness silver lining.

Diversity in horror is becoming something that is a regular part of the genre, and not a novelty. I consider that a definite improvement. I think that styles of horror tend to cycle in terms of what is popular. Currently, psychological and political horror are experiencing a resurgence. Because of the global pandemic, ecoterror is making a resurgence. And I absolutely adore ecoterror, something that was popular in the 1970s, that includes everything from terrifying viruses to nature clapping back against humanity with violent plants and resentful animals.

When I was a kid in the 1970s, there were serious horror movies with Black stars, like Night of the Living Dead and Dawn of the Dead. But they all had predominately white casts. Then there were black cast blaxplotation films like Blacula. And in the world of horror writing, for a long time, you had a black characters who were in a sort of Uncle Tom’s Cabin martyr role. That happened in Night of the Living Dead, in Stephen King’s The Stand and The Green Mile. Black people were so sick of us dying all the time that when you started to see villains like Tony Todd’s Candyman, well, it kind of felt like it was better to be a villain than a martyr. Nowadays you see more and more, full fledged, nuanced worlds with multiple black characters, like in Jordan Peele’s Us, and books with black heroes and heroines like LA Bank’s Damali Richards.

Damali Richards, a badass black vampire slayer from LA Banks’ The Vampire Huntress series, definitely tops my list. Tony Todd’s Candyman is another favorite of mine. Adelaide Wilson, the subtle and nuanced protagonist portrayed by Lupita Nyong’o in Jordan Peele’s Us with her clear case of pretender’s syndrome with an eerie origin story. The title character in Toni Morrison’s Sula is a complicated character who is troubled by some bizarre and seemingly supernatural earthly reactions to very her person.

The incredibly talented Chesya Burke is a writer who first came to my attention when I was putting together 60 Black Women in Horror. Valjeanne Jeffers and Crystal Connor are two writers who have impressed me with their short story work. I love L.A. Banks’ highly entertaining Vampire Huntress series. I love anthologies that give the reader a sampling of various African Diaspora horror writers, and Sycorax’s Daughers, edited by Linda Addison, Kinitra Brooks, and Susanna Morris and Dark Matter edited by Sheree Renee Thomas are two I recommend.

Read calls for submissions carefully. A lot of new writers starting out collect more rejection letters than they might otherwise because they aren’t conscientious about word count, formatting request, and the like. Also, making sure you send in something that meets what is being asked for with regards to theme helps increase your chances of being accepted into an anthology. As does avoiding things they say they do not want. Don’t give up if you get rejected. Find another submission call, and resubmit. Make sure to edit before you resubmit something that has been rejected elsewhere. Editing it to more closely match the new call, and considering any advice or information given in your rejection letter can help increase the chances of an acceptance letter.

I look to community for moral support. Networking with other Black writers can help you to develop a support system, which can keep your spirits up when you’re dealing with issues that other Black writers might understand because of shared experience. Generally, any writer can benefit from writer’s groups and places to encourage one another and vent about frustrations like writer’s block and rejection letters. But I think, for marginalized people, having friends and associates to vent about when you run into things like blatant or latent racism or just plain ignorance can help prevent burn-out.