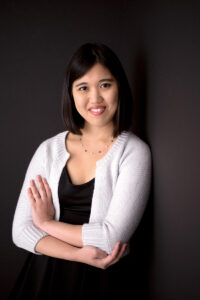 Vanessa Fogg is an American writer of Thai and Chinese descent, born and raised in the American Midwest. After years as a research scientist in molecular cell biology, she now works as a freelance scientific/medical writer and editor. She writes fantasy and science fiction as well as horror, and stories that bleed across genres. Her short fiction has appeared in Lightspeed, Daily Science Fiction, GigaNotoSaurus, The Future Fire, Translunar Travelers Lounge, and The Best Science Fiction of the Year: Volume 4. Her fantasy novelette, The Lilies of Dawn, is available in print and ebook from Annorlunda Books. For a complete bibliography and more, visit her website at www.vanessafogg.com

I was one of those kids who was always writing, always making up stories. I loved books, and from the beginning, I think the stories in books have inspired me to make my own. I remember illustrating and stapling together my own “books” as a kid. In college, I minored in creative writing. But I majored in biology and loved that as well. For a long time after college, creative writing took a back seat as I concentrated on trying to build a career in scientific research. It was only slowly that I made my way back into fiction writing, after more than I decade away. In 2013 I left the laboratory bench for good, and decided to finally start taking my writing seriously.

For me, the chief attractions of horror are control and catharsis. It can often feel that we have little control over real-world horrors, particularly at times like this, when real-world horrors seem to proliferate in the news media. But in horror fiction both writers and readers can confront our fears and monsters in a controlled fashion, a safe fashion. And sometimes in horror fiction, we can even be the monsters; we can give vent to our deepest darknesses. There’s a powerful catharsis in that. Horror allows us to explore and confront the darkness in a way that only fiction allows.

Not really. Each story is its own thing. Sometimes that means a story features explicitly Asian protagonists, like in my dark fantasy story, “The Breaking” in Mithila Review https://mithilareview.com/fogg_03_20/ ). That story was heavily about family responsibilities and expectations, particularly about the parents’ expectations that the older sibling be responsible for the younger one. For this particular story, I couldn’t not draw on specific family dynamics and culture that I know; they couldn’t not be a Thai-

American family. I’m not saying that these themes are exclusive to Asian or Asian-American families—far from it! But this is how I myself had to tell that particular story. Each story is different for me, and I don’t really consciously decide on an agenda or themes—or even necessarily characters—when I start one. I get a flash of an idea, often a single image, and it evolves from there.

I think the biggest change I’ve seen in horror/short dark fiction is what I’ve seen in the speculative fiction genre as a whole. Which is that there’s been an impressive influx of talented new writers representing backgrounds and perspectives that were not well-represented before. We’re getting so many exciting new international writers from non-Anglo countries in English-language horror—writers from Singapore, Malaysia, Pakistan, Nigeria, the Caribbean, and more. Writers drawing on non-European myths and cultures. Global media has made it easier for all of us to consume stories from around the world, and I see that growing global influence—consumption of non-Western media such as anime, manga, k-dramas, c-dramas, and other foreign films and television–on horror and speculative fiction writers regardless of a writer’s own personal ethnic or cultural background. There are also an increasing number of writers exploring queer narratives, themes, and characters in horror and dark fiction. I think it’s a really exciting time for horror and for literature as a whole.

Who are some  Asian Diaspora horror authors that you recommend our audience check out?

So many. I admit that I’ve read more horror short fiction than novels, so this list will be heavily biased toward short fiction writers. It also includes a few writers who might not be diaspora, but who are Asian and writing in English. Cassandra Khaw, Alyssa Wong, Isabel Yap (check out Yap’s debut collection Never Have I Ever) are all marvelous. L. Chan is a writer from Singapore who’s been publishing some marvelous horror over the last several years—check out his recent stories in The Dark Magazine. Elaine Cuyekeng (check out her Eugie Award-winning story, “The Genetic Alchemist’s Daughter,”), Eliza Chan, Ai Jiang, and Suzan Palumbo (check out Palumbo’s Nebula-nominated story, “Laughter Among the Trees.”) Ian Muneshwar and Usman T. Malik. In terms of longer fiction, Aliette de Bodard and Jeannette Ng are not often thought of as horror writers, but there are strong horror elements in de Bodard’s Gothic alternate-Paris fantasy series, The Dominion of the Fallen, and there are also strong horror elements in Ng’s Victorian Gothic faerie novel, Under the Pendulum Sun. Oh, and I must also recommend every writer in the marvelous Bram Stoker-winning anthology, Black Cranes: Tales of Unquiet Women, an anthology of horror by Asian women writers.

My advice is what I would give any writer. Read widely. Read both within the genre you want to write in, and read in other genres, too. Be open to inspirations from other art forms. Write, and try to finish what you write. Find a community of writers who are close to your own level—writing can be a lonely business, and it can be invaluable to have a writing community for support. Every so often, go for a walk

I once saw the Vietnamese-American novelist, Viet Thanh Nguyen, tweet a thread of advice for Asian-American writers and others of minority backgrounds, and the first tweet of his thread said something like, “Write as though you’re the dominant majority.” That advice has always stuck with me. I can’t find the thread anymore (and he seems to have deactivated his Twitter account), but I was able to find an interview where he restates his advice. It’s good, and here are the essential lines:

“If you are coming from a background outside of [the majority] as some kind of disempowered, marginalized, minority population, you may feel the pressure to explain yourself and your culture, to translate yourself, your languages, your customs, and so on and so forth — this is something that must be absolutely resisted by any writer,” Nguyen said. “When I say write like a majority, I don’t mean like a white person, I mean write as if we ourselves are speaking to ourselves, and let everyone else catch up. That’s where you get interesting art, and even hopefully, great art, to come from.”