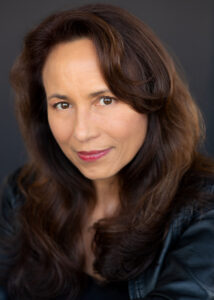 Tori Eldridge is the SCIBA national bestselling author and Anthony, Lefty, and Macavity Awards finalist of the Lily Wong mystery thriller series—THE NINJA DAUGHTER, THE NINJA’S BLADE, and THE NINJA BETRAYED. Her shorter works appear in the inaugural reboot of WEIRD TALES magazine and horror, dystopian, and other literary anthologies. Her horror screenplay THE GIFT—which inspired DANCE AMONG THE FLAMES—earned a semi-finalist spot for the Academy Nicholl Fellowship.

Before writing, Tori performed as an actress, singer, dancer on Broadway, television, and film, and earned a 5th degree black belt in To-Shin Do ninja martial arts. She is of Hawaiian, Chinese, Norwegian descent and was born and raised in Honolulu where she graduated from Punahou School with classmate Barack Obama. Tori’s deep interest in world culture and religions has prompted her to visit nine countries, including Brazil.

I was one of those kids who wrote angst-ridden poetry, played in dramatic make-believe worlds, and read voraciously so I could lose myself in other people’s stories. I didn’t try to write my own stories until my husband switched careers into producing and we received an onslaught of screenplays. Not surprisingly, I got the urge to write one myself. It felt so validating when my first screenplay earned a semi-finalist spot for the Academy Nicoll Fellowship. I thought, “Maybe I can do this!” So when people who read it encouraged me to write a novel, I did. And I loved it. But at that time, I didn’t want to do the business of writing. It wasn’t my boys were grown and I had earned a 5th-degree black belt in the ninja martial arts that I was pulled back to write fiction.

My early encounters with the horror genre were THE OMEN, THE EXORCIST, and tons of novels by Stephen King, Anne Rice, and Dean Koontz. But I also read espionage, action thrillers, mysteries, historical fiction (especially those set in China or Japan), scifi, fantasy, and—dearest of them all—the Asian literary fiction by Pearl S. Buck.

I think I gravitated, unconsciously, to writing horror because of the intense emotions it evokes. The dramatic child in me responds to jeopardy, fear, fortitude, and adventure. The inquisitive adult searches for meaning. I don’t think I was drawn to write about dark things as much as I was drawn to examine the darkness in humanity and the society in which we live.

I didn’t start writing about my own Asian culture until I wrote the short story Call Me Dumpling that appeared in Suspense Magazine’s Best of 2014 issue. As that story flowed out of me, I inserted my Asian-ness into a character for the first time and Lily Wong appeared. Once I discovered her, I knew I would write her into a novel. Three books later, I have a series with more to come.

As you might know, the Lily Wong series draws from my own ninja martial arts experience and my Chinese Norwegian heritage. I didn’t include my Native Hawaiian heritage because that wasn’t part of Lily Wong’s story. She was a Los Angeles woman, born and raised in the Chinese-centric community of Arcadia, with an immigrant mother from Hong Kong. Although Lily and I share a common heritage, her experience was very different than mine.

I wasn’t writing Lily Wong to encapsulate or speak for all Chinese Americans, or on behalf of all mixed Asians. Lily is Lily. I want her to speak for herself. Which, by the way, is exactly what I want going forward in the horror genre and every other literary genre. I want Asian characters to be written as individual people, not as stereotype placeholders for our culture.

I think there’s always been a tendency in literature to promote the fetish and illusion of the soft spoken, subservient, Geisha type of woman—never speaking up, never taking agency for herself, putting herself aside for the benefit of men. And I’d like to see that gone!

I’m going to have to think about this one. Honestly, I haven’t read a lot of Asian characters in horror, except for short stories. In which case, there are fabulous authors like Lee Murray, Angela Yuriko Smith, Christina Ng, Rena Mason, and Geneve Flynn. As I write this response, I am eagerly awaiting Alma Katsu’s new horror novel, THE FERVOR. These are the authors I have read, but I haven’t locked into any favorite Asian character in horror the way I have with historical fiction, literary, mystery, or suspense.

It’s much easier to bond with a character when they’re part of a series, which is something I don’t usually find in horror. With a character like Lily Wong, you meet her and her family in THE NINJA DAUGHTER, become more invested in her life and empowering mission with THE NINJA’S BLADE, then travel all the way to Hong Kong with her and her mother in THE NINJA BETRAYED. Each book takes you deeper into her personal demons, yearnings, and doubts, made even more intimate because of the first-person point of view. There’s a lot to grab hold of with a character like Lily Wong. The long-term relationship of a series gives readers a chance to bond more deeply.

I would encourage horror authors to integrate other genres into their work if they feel so compelled. The essence of horror is dread, which is why horror and thrillers so frequently overlap as they have in Christopher Golden’s ARARAT or Jonathan Maberry’s Joe Ledger series. The intensity of emotion and setting blends well with literary and historical fiction as we’ve seen with Silvia Moreno-Garcia’s MEXICAN GOTHIC and Alma Katsu’s THE DEEP. There’s also a tremendous opportunity to dive into deep themes and diverse cultures.

My latest novel, DANCE AMONG THE FLAMES, introduces Serafina Olegario, who rises from the slums of Brazil to become a fearsome wielder of Quimbanda magic. It takes a “daring look into the issues of colorism, class, generational, trauma, and physical, sexual, and emotional abuse” (Publishers Weekly, starred review). It also blends horror with literary, historical, and suspense, and has an action-packed finish to rival any of my previous thrillers. Although challenging to market, DANCE AMONG THE FLAMES was life-changing to write and hopefully engaging to read.

So here’s my advice: If you have a story inside of you that breaks out of the mold, write it. Our genre is rich enough and broad enough to embrace you.

Write the book and characters you want to write. Don’t feel you have to write characters that fit the American perception of Asian. Don’t feel that you have to speak on behalf of all Asian Americans or Asian diaspora. Make your characters deep and unique. Infuse them with heritage, but at the same time, pull out what is special and different about them.