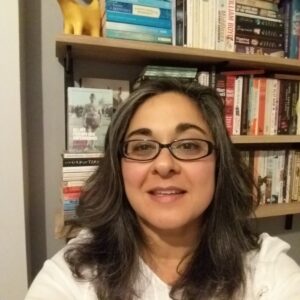 Like all writers, I grew up with stories in all their forms. I’ve always had a desire to write. I never felt it more acutely than when I read “The Bloody Chamber” by Angela Carter. I wanted to make someone else feel the way she made me feel. I’ll never reach those lofty heights and I parked that desire for another twenty years. I got to a point where I couldn’t keep those feelings in anymore.

I’ve aways been drawn to the secret and arcane. I found horror thrilling. It was a chance to draw back the veil. I’d become privy to the worst things that hide within us. And the best. The psychology of it is fascinating to me.

I find this question difficult as I don’t fit into a box easily. I come from a mixed heritage background (Indian/a quarter English) and grew up in the UK. We were one of two Asian families in our town and the other one didn’t speak to us. To this day I’m still not sure why that was. As a result of her Anglo-Indian upbringing my mum faced racism from both Indian and English people. I felt that very keenly and I think this has had an impact on how I see the world and how I write.

My parents wanted me to fit in, which manifested itself in several ways. They gave me the very anglicised nickname of Pippa and didn’t teach me Hindi. I feel very divorced from my Indian heritage and this reflects in my writing. I am neither one thing or another. I fear writing more traditional Asian Diaspora characters as I am scared of getting this wrong and causing offense. Or doing it badly and reaping scorn.

The one time I did this was writing about an Indian man in a story called The Englishman. It’s about my dad returning to India after over twenty years of living in England. I could do that with confidence as I took that trip with him.

Horror is everywhere, in the fabric of the everyday. Some people don’t want to face what makes them afraid or uneasy, but I’d rather look at it face on. The unknown is always worse than the known.

It’s taken me a long time to realise why I like horror and it’s only through writing it that I understand why. When I write about the painful things in my life, I find horror and the fantastic an easier way of processing them. The reality of suffering is truly terrible. It’s real-life dramas about terrible events or experiences that I struggle to watch or read about. I find them easier to consider when cloaked in the fantastic and horrific than when looked at directly. It abstracts them.

There’s also a lot of hope and redemption in horror, much more than people think.

It’s exciting to see increasing inclusivity in publishing and reviewing, and hopefully that will continue to grow and attract new readers. I’d like it to go even further though. Horror is still treated with suspicion by wider audiences. Package it in a crime novel or a gothic ghost story and it’s more palatable. The genre isn’t treated with the respect it deserves. In an age where we’re seeing horror films being nominated for Oscars, it would be great to see more acclaim for some of the terrific horror novels out there.

If you’re talking about representation in western markets I never really saw Asian characters in the books available to me when I was growing up, except as someone strange/exotic/disposable/mystic. Their being Asian was their single defining characteristic. I think/hope that’s changing and they are moving to the centre of the stage as fully fleshed-out characters.

Cyrah from “The Devourers” by Indrapamit Das. She experiences some horrific things but is a survivor. I loved how her journey ended.

The other is the protagonist of Vikram Paralker’s “Night Theatre”- a surgeon who is visited by the dead. It’s not billed as horror but there some elements of horror there. He is a flawed man who is just doing the best he can with what he has.

I can’t resist including non-genre writer Jhumpa Lahiri for her short stories, which are a masterclass in the form.

Let your horror serve the story, not the other way around. Horror means different things to different people. Write your own horror. Don’t follow trends and fashion in your writing, or you’ll always be behind the curve. Don’t feel you have to write what you know. Write what you love or are excited by. If you find a connection to something and treat it with respect your readers will feel that too.

It’s easy to collapse under the weight of labels. Female writer. Asian writer. LGBTQ writer. Post-gender writer. If you want to teach people about what it’s like to be any of these things, then great. Do it. But it’s not your responsibility to educate the world. Write what YOU want to write.

My experience of the horror writing community is that it’s very supportive. I’m made some wonderful friends here. It’s been invigorating. You don’t have to be alone, not if you don’t want to.

Ignore the tyranny of other people’s word counts. I used to see them on social media and feel inadequate. We all do it differently and that’s just fine.