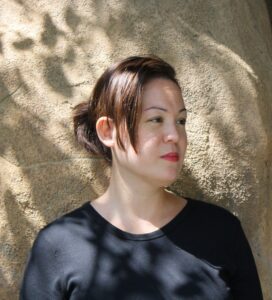 K.P. Kulski is the author of Fairest Flesh, from Strangehouse Books and House of Pungsu, from Bizarro Pulp Press. Her short fiction has appeared in various publications including Fantasy Magazine, and anthologies, Not All Monsters, from Strangehouse Books and The Dead Inside, from Dark Dispatch. Born in Honolulu, Hawaii to a Korean mother and American-military father, she spent her youth wandering many places both inside and outside the United States. She’s a veteran of the U.S. Navy and Air Force and as a former history professor, she often draws inspiration from the stories of the past. Find her at garnetonwinter.com and on Twitter @garnetonwinter.

I was less inspired but driven to writing as it gave me an outlet for dealing with difficult things in my life as well as a place where I could adequately express my emotions. I started with poetry as a kid and it grew from there. Great poets like Emily Dickinson and Sylvia Plath have been a huge inspiration for me.

I always say horror chose me. I was a major reader of fantasy for quite some time, which gave me an escape from a difficult childhood. I intended to write fantasy but every time I put pen to paper, horror came out. At first, I tried to wrangle it, put it away, but then I realized that something within me needed to express horror. Really, I should have known because I’ve always been dreadfully morbid. Horror is absolutely where I belong, and I haven’t looked back since.

Do you make a conscious effort to include Asian and/or Asian Diaspora characters and themes in your writing and if so, what do you want to portray?

Many of my POV characters are Asian or mixed-Asian whether the reader realizes or not, as the stories do not necessarily revolve around their Asian-ness but their humanity. It’s not particularly conscious, I guess it’s more of a “write what you know” thing.

But after the Atlanta Spa Shootings and increase in anti-Asian sentiment, I felt a deep need to explore my heritage and speak out. I was also influenced by Black Cranes: Tales of Unquiet Women edited by Lee Murray and Geneve Flynn. I hadn’t seen Asian women’s stories in horror like this before, the raw exploration of our experiences. The stories made me feel seen for the first time and became one of those life changing books.

At that point, I made a conscious choice to focus on that part of myself and subsequently I went into my emotional closet to pull out the skeletons, diving into the painful history of my family and my own sense of otherness. Recently, several of my stories are about those Asian and Asian diaspora experiences. My upcoming novella from Bizarro Pulp Press, House of Pungsu is purposefully steeped in Korean lore and history to tell a women’s story. My short story, “My Skin Drum Garden” from The Dead Inside edited by Laurel Hightower is specifically about experiencing racism in America as a mixed-race Asian-American. My goal is to show how varied Asian experiences are, the richness of Korean culture and history, and what racism looks like for Asian-Americans. We are complex individuals, just like any other human. Neither us nor our cultures are collectables someone picked up during vacation, or in historic instances, war.

Horror has taught me how to see the world. Really see it. It’s like putting on glasses that let you see the demons that inhabit people instead of the mere human-like exterior. It’s a tool of truth telling. It has also taught me a lot about the things that matter, to hold those things close, to cherish them—family, love, friends, choosing and owning one’s identity.

Indie horror is a special place. It’s where authors are breaking new ground. The range of horror has increased so much to include many perspectives and experiences. I adore this part of our community. A reader can live a life through a book, see through the eyes of characters. How potentially transformative for people, something I find particularly moving. There is plenty of growth still needed, but I greatly respect the direction many people in the community have advocated and encouraged. Hopefully I’m not being overly optimistic, but I think this will continue because I see the horror genre as rebellious. I hope to see the same widening and continued growth of diversity reach the big publishers as well.

How do you feel Asian and Asian Diaspora communities have been represented thus far in the genre and what hopes do you have for representation in the genre going forward?

While Asian horror films have been wonderfully celebrated, I feel there’s much less available and celebrated in horror fiction. I’d like to see that change and recent projects particularly by Lee Murray, Christina Sng, Geneve Flynn, and Angela Yuriko Smith are hugely instrumental in opening this door. In general, I would really like the focus to include Asian diaspora horror, not just Asian horror.

The way Asian culture has been too often treated in Western culture is that of a curiosity, a novel thing to put on a shelf, which I think is quite reflective of white supremist notions. Exoticism for the pleasure of a white audience. I want to see this change. Ideas like this are the root of horrible things like the Spa Shootings.

I remember reading an article by an actor who mentioned that despite their Asian heritage, they sometimes had trouble getting parts because they did not “look Asian enough.” We don’t all look/act the way others may expect because those expectations are based on stereotypes.

Oh my goodness, I recently read Black Water Sister by Zen Cho and the Malaysian goddess which the book is named for is just fabulous. A ghost and a deity in her own right, but something more, she is vengeful and powerful in all the ways that she couldn’t be in life. She is creepy and the more you learn about her the more you feel her rage run through your own veins. She’s wonderful.

Ming Wai in Water Ghosts by Shawna Yang Ryan, the left behind wife of a Chinese-American man. She arrives and joins her husband Richard rather unexpectedly in the small Chinese Farming town of 1928 Locke, California. Distant, pliable, yet insistent there’s a sinister Stepford Wives feeling about her. I don’t want to spoil the book for anyone who reads it, but I’ll just say, Ming Wai’s damp presence is quite disquieting.

While a historic figure, Ji Yun lurks as much as a character in his accounts of the supernatural and strange in The Shadow Book of Ji Yun, translated and edited by Yi Izzy Yu and John Yu Branscum. I found his diary-like accounts addictive and felt the same sense of awe and horror he expresses. This non-fiction work wouldn’t be nearly as good without Ji Yun’s personality.

Who are some Asian / Asian Diaspora horror authors you recommend our audience check out?

There is a fabulous community of Asian writers in horror and there are many to discover. I recommend Lee Murray, Geneve Flynn, Angela Yuriko Smith, and Christina Sng. If you haven’t read Tortured Willows, get on that now, the poetry is earth-shaking in its harrowing beauty and importance. J.A.W. McCarthy’s collection, Sometimes We’re Cruel and Other Stories made my head explode. So disturbing, creepy, and just absolutely fabulous. I enjoy Marjorie Liu’s Monstress graphic novels, and her collection of short stories, The Tangleroot Palace is excellent. Not all the stories are horror, and while all the stories are good, my favorites are horror or horror adjacent. I’m eagerly awaiting the release of Alma Katsu’s The Fervor, hopefully by the time you’re reading this I will have my hands on a copy.

First set up some self-care. Next, go into the closed part of your psyche, the place where you store the most difficult and painful things. Open up the dusty chests you have stored in there. Pull out things one by one. Let them linger on you, but also admire their painful beauty. Then write about it.

And to the Asian and Asian Diaspora writers out there who are just getting started, what advice would you give them?

You don’t have to know every part of your Asian heritage. If your family is anything like mine, there are secrets, tons of things we just don’t talk about. That doesn’t make you any less qualified to talk about your experiences. Further, your experiences are valid. The incredible Lee Murray told me recently, “you belong,” and it was exactly what I needed to hear. So, I want to extend that to you. You belong. Don’t be afraid to embrace your heritage. You don’t need to fit into what stereotypes expect you to be or look. Our voices are needed. We need to claim space, speak out, and be seen. One of the best ways to do that is to tell our stories.