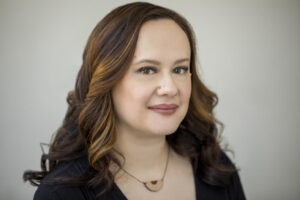 J.A.W. McCarthy is the author of Sometimes We’re Cruel and Other Stories (Cemetery Gates Media, 2021). Her short fiction has appeared in numerous publications, including Vastarien, LampLight, Apparition Lit, Tales to Terrify, and The Best Horror of the Year Vol 13 (ed. Ellen Datlow). She is Thai American and lives with her husband and assistant cats in the Pacific Northwest. You can call her Jen on Twitter @JAWMcCarthy, and find out more at www.jawmccarthy.com.

I’ve been writing since childhood, so I can’t pinpoint the exact origin, but I have to credit my mother for my love of storytelling. Not only did she read to me every night, but she told me her own stories and would sketch illustrations as she spoke. She planted these seeds so early that it’s no surprise I grew up to be a creative.

I have to credit my parents again for this one. They never limited the media I consumed, so I got exposed to horror literature and film pretty young. I read Carrie, Interview with the Vampire, and saw Poltergeist before I should have. In fact, I had the same toy telephone as Carol Anne, and after I saw Poltergeist I was terrified of that thing. I was already a pretty fearful child, so it was odd that I was so drawn to horror, but I’ve come to realize that attraction was a way of controlling my fears. I could be in control of what I feared most if I wrote about it.

I did not until recently. I used to feel it was unnecessary to include my characters’ ethnicity in my stories; they could be anybody and I wanted readers to be able to see themselves in my work. Recently, though, I’ve come to realize that specificity is part of what makes my writing unique. I love including weird little details from my own life in my stories. My work often deals with identity, and a huge part of our identity is our heritage. In my mind my protagonists are always half-Asian women like myself, so why not put that on the page? When I was growing up, I didn’t see girls like myself in movies and books. Representation is important, and it’s equally important to see women like me doing both wonderful and horrible things.

The world is often a terrible, hopeless place, and horror reflects that in a manner that I can process. It’s forced me to face that there’s a lot of darkness in my own heart, things from my life that I never dealt with until recently. I’ve looked at the things I’ve done and the things that have been done to me and found a way to spin them into stories that were cathartic to write. Horror can be a brutal mirror, but it has also freed me.

When I was a teen in the 90s and first started seeking out venues with an eye towards publication, all of the horror magazines I encountered were filled with men. Every TOC was 90% men, and many of the stories involved rape and portraying women as either shrewish wives or helpless victims the protagonist (always a man) had to save. It was very discouraging, to say the least. Now, we’re finally seeing women, nonbinary people, LGBTQ+ people, and people of color getting a seat at the table. And with that comes not only a wider range of narratives, but also stories that shine a light on the effects of bigotry, rather than centering that bigotry as the acceptable norm.

I think it’s been slow-going in mainstream media. Only recently have we seen films with Asian leads getting both box office success and awards attention. As with most genres, if an Asian person is even included, they’re often the expendable best friend or the expendable henchman. Because of that, I’ve been overjoyed to see Asian horror films and books get attention lately. Asian lore is rich with horror! Finally, horror fans are looking to Asian films for fresh ideas and inspiration. What I want to see more of, though, is Asian representation in Western stories that have nothing to do with our heritage. Slashers, ghost stories, body horror—let’s see protagonists who are Asian. Let’s see an Asian American final girl who comes home after slaying the serial killer, and her mom’s not saying “Did you do your homework? Your grades are slipping!”; instead Mom is proud of her tough kid, and maybe they go get matching tattoos. It doesn’t have to be a big deal.

I regret that I’m leaving out some people, but I want to mention the following authors who are writing some truly interesting fiction and poetry: Nadia Bulkin, Ai Jiang, doungjai gam, KP Kulski, and Lee Murray. Their work scares and inspires me, and I encourage everyone to check them out.

Be genuine. Support others. The friends I’ve made in the horror community have inspired and encouraged me, and I’m a better writer for knowing them.

Don’t self-reject! Write honestly and freely, if it is safe for you to do so (pen names are a great option). When subbing, don’t second guess yourself. As a biracial person, I missed a lot of important opportunities because I was afraid I wasn’t Asian enough. You’re enough.