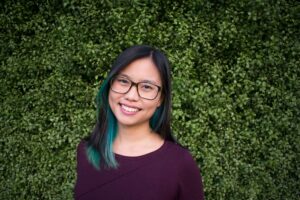 Grace Chan is an Aurealis and Norma K Hemming Award-nominated speculative fiction writer. She can’t seem to stop scribbling about brains, minds, space, technology, and identity. Her short fiction can be found in Clarkesworld, Lightspeed, Fireside, Aurealis, and many other places. Her debut novel, Every Version of You, will be published in August 2022.

Grace was born in Malaysia and lives in Melbourne, Australia. Her other interests include salt-and-vinegar anything and secretly filming her friends’ NYE karaoke highlights. In a decaffeinated state, she may cease to exist. You can find her online at www.gracechanwrites.com and on Twitter as @gracechanwrites.

Like many other writers, I’ve been scribbling stories since I was a kid. Writing is something I don’t think I could not do—as long as I have enough energy and motivation. I was inspired to start writing and submitting more seriously in 2018, after reading some contemporary speculative fiction and being completely blown away by the power, beauty, play, and wonder of it. I read and write both short and long speculative fiction—I can’t choose a favourite.

I write a range of speculative fiction: mostly science fiction, but also some horror and fantasy. My second ever published short story, ‘The Mark’, was inadvertently a horror story, and I was fortunate to have it nominated for an Aurealis Award and a Norma K Hemming Award. It’s a psychological horror. I think I’m drawn towards that sort of bent—the unsettling, the uncanny, and the hidden and disturbing parts of ordinary life brought out of the shadows. I think that’s a powerful thing that horror writing can do: bringing the horror out of the everyday, pointing out horrific things that we’ve become used to overlooking.

I wouldn’t say I make a conscious effort. Pretty much all my stories feature Asian characters of some description, many of whom have migration in their personal histories—although I can think of a couple of exceptions where ethnic background is not explicitly stated. But that’s mainly because I’m writing what I know and who I want to see in fiction.

I want to portray diversity and difference within my characters. I want Asian characters who are ambitious, reflective, meek, headstrong, morally grey, charming, pugnacious, pacifist, loud, quiet, nurturing, and so on—the full spectrum of humanity. My stories also often have themes of people making choices against overwhelming systemic forces, even if they are resisting in the quietest way.

One of the most challenging stories for me to write was ‘Of Hunger and Fury,’ which was an original piece I wrote for the Bram Stoker and Shirley Jackson Award-winning anthology, Black Cranes: Tales of Unquiet Women. It was challenging partly because once I started to write, I discovered an outpouring of emotion—in particular, perhaps not surprisingly, hunger and fury.

Writing horror has taught me that the horror genre can be surprisingly cathartic and healing, and not necessarily have a sad ending. It can put words to nebulous emotions and experiences and provide a bridge, a shared space, between writer and reader.

I don’t feel qualified to answer this question! I’m relatively new to writing and consuming horror, and I have a lot to learn in this space. I’m really excited by how horror appears in mixed genre spaces—horror/literary fic, horror/scifi, horror/black comedy, for example. I think you can create exciting and new things in such cross-genre (or genre-less) spaces.

Some recent horror works that have really impressed me are Jordan Peele’s films, ‘Get Out’ and ‘Us’. They are deeply unsettling and comment powerfully on the horror in our everyday world.

I love how Sayaka Murata’s Earthlings and Han Kang’s The Vegetarian bring a subtle, psychological, bone-chilling type of horror into literary fiction.

I’m also extremely fond of zombie tales. ‘Zombies’ can appear in so many ways and serve so many functions in a narrative—a creeping catatonia mirroring the protagonist’s self-loathing and detachment, as in Caitlin Starling’s Yellow Jessamine; a mysterious ailment to be uncovered as in The Silent Sea and Kingdom; the vehicle for satire, as in Ling Ma’s Severance.

In the future, I hope that we can see many more Asian horror writers receive attention for their work—and, if this is the case, we’ll see more Asian characters in horror. The more Asian writers are platformed, the more diversity and creativity, and experimentation we’ll see in horror writing.

I’m a big fan of Kingdom, the period zombie horror series from South Korea. I really enjoyed the sidequel, Kingdom: Ashin of the North, in which trauma and loss propel Ashin from a desperate child to a vengeful woman. I think a complex antihero can really make a story, and this was a gripping, disturbing, tragic exploration of the antihero’s backstory.

An excellent place to start is with the contributors to Black Cranes: Tales of Unquiet Women! There is such a diverse range of stories in the collection—horror blended with science fiction, mythology, folklore, fantasy, humour.

It’s probably a bit generic, but—write what scares you!

I find the uncanny and the psychological the most frightening type of horror—so I try to lean into it, to draw on that primal aversion, and use that to feed my writing. You’re scared for a reason: there’s something there, something valuable and substantial that will enrich your writing and hopefully creep out your readers, too.

Write what is meaningful to you. Don’t ever feel like you have to write like someone else. If you receive criticism, take it, but with a grain of salt—sometimes it says more about the critic than about your work. No one else has your voice, your experiences, your way of knitting words together. That is what makes your work special.