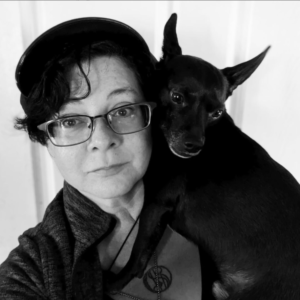 Angela Yuriko Smith is a third-generation Shimanchu-American and an award-winning poet, author, and publisher with 20+ years of experience as a professional writer in nonfiction. Publisher of Space & Time magazine (est. 1966), a three-time Bram Stoker Awards® Finalist, and HWA Mentor of the Year for 2020, she offers resources for writers at angelaysmith.com.

I can’t remember a time when I didn’t read but it wasn’t until somewhere around second grade that I got the concept that I could write stories as well. It was a comic book I was reading sometime in the 70s that inspired me. I wish I remembered the villain’s name—maybe it was Kingpin—but he used words to defeat the heroes. In one panel he made a speech where he essentially claimed that the person who could control the power of words could control the world. As a small, young person that felt powerless that appealed to me. This villain could change his future by just writing. I took that seriously and wrote my first short story around that time. As an adult I lost my desire to “control the world” but I still use my writing to change my future all the time.

Like many of us that are attracted to horror, it was real-life trauma. I saw and heard things no one else could as a child but the adults around me advised me to ignore it. It became a thing to not talk about because it made everyone around me uncomfortable. As an adult, I understand now what a creepy child I was but at the time it was frustrating. Horror stories were more real to me than daily life because they were populated with people like me in them. People heard disembodied voices, interacted with shadows, and saw people no one else could. They were often told, like me, it was just imagination but they knew—and I knew—these things were real. It made me feel less of an outsider to read these stories. I realized I wasn’t actually so weird, I was just in the wrong story.

I have since Bryan Thao Worra asked me why I didn’t. At the time I was writing what I thought horror was, and the characters were all very stereotypical. Bryan advised me to include characters from my culture in my work and I remember objecting that I wasn’t “Asian enough.” I’m only 25% Shimanchu. Bryan said “then write that experience of being between cultures and belonging to neither.” I did that in my next story, which was “Vanilla Rice.” It wound up being a successful move. Not only was that my first professional sale, published in the Where the Stars Rise: Asian Science Fiction and Fantasy anthology (ed. by Lucas K. Law and Derwin Mak), winner of the 2018 Alberta Book Publishing Award, Best Speculative Fiction of the Year and a 2018 (Canadian SF&F) Aurora Award Finalist in Best Related Work/Anthology. It’s been reprinted twice since, and each time the work it was included in has won awards including the recent Black Cranes (ed. Lee Murray and Geneve Flynn) which took home a Bram Stoker and a Shirley Jackson, among awards. Really, really good advice from Bryan Thao Worra and I am ever grateful.

As far as how I want to portray Asian characters, my answer is with authenticity. There are a lot of stereotypes, and they exist because people of the same race do have common traits—but we are all so much more. I try to write my characters as aspects from my own experience. They usually don’t fit in and have an awkwardness about them. They struggle with identity and belonging. Also, like me, they usually find that the strange places in-between are exactly where they belong. They move from seeking acceptance to granting it for themselves. That doesn’t guarantee a happy ending, but what does?.

That monsters aren’t always hideous, and the hero often is. I’ve learned that we all play a dual role as both victim and perpetrator, whether we realize it or not. We all have a little monster inside of us, and the sooner we can come to grips with it and give that inner monster some acceptance, the sooner it will calm down and let us be generally nice. I’ve learned that things can be very dark, but if we survive to the other side of the nightmare, everything tastes better. Finally, lack of knowledge is the source of fear. What we can’t see is always more terrifying than what we can. Once you’ve seen it all you can let go of fear.

I feel like the horror genre has gotten more complex, or maybe I’m just becoming more aware of it. The last few decades of horror have gone beyond the trope of a cis white female with daddy issues running from a cis white male with mommy issues. We see all sorts of characters now in a variety of skin tones, genders and preferences. Where the monsters were usually doomed to be hideous, they’re no longer limited to tentacles and warts. They can be lovely, they can be the good guys… they can even be our friends. I think as we learn to be more accepting as a society, we recognize more and more that often the monsters are us.

I think in the past the Asian community has suffered from being cast in narrow limiting roles. Like many communities of color, we were often relegated to the parts of sidekick, comic relief, expendable victim or villain. Thanks to technology, the world has gained open access and everyone can be exposed to the rich tapestry of horror the Asian community offers. Ghosts, demons, superstition and monsters are a big part of our beliefs, even today. For decades communities of culture have had their nightmares borrowed and whitewashed for Western audiences. Now they are being credited to us. I hope this continues and we start to recognize that all stories have value and merit.

Probably Asakawa, the journalist in Ring by Koji Suzuki. I also love the Shinigami—death god—named Ryuk from the Death Note anime series. It’s been very, very cool to see some all Asian horror in mainstream series like Squid Games so add Seong Gi-hun, aka Player 456, to that list.

Locate your fears and learn to savor them. Not just the common fears that are easy to pass off like spiders and snakes, but the deep fears that trip through your mind late at night when you’re alone. Hunt down and dissect your remnants of terror that are too strange to relate because no one wouldl understand. These are the fears you want to befriend. When the demon is scratching at the edge of your dreams asking to be let in, meet them there, Study them from the safe side of your door and find out what they dream of. Once you can devour your own fear it shines in your ink.

Listen to Bryan Thao Worra and put your unique experience into your work. He knows what he’s talking about…. But that’s really good advice for any writer regardless.