And Now for Something Completely Different: Adding Humor to Your Horror 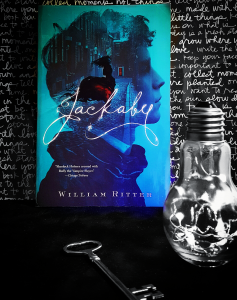 With the popularity of dark comedies, it should be no surprise that horror and humor can be a compelling mix. However, when it comes to young adult books, few succeed at the balance that keeps a funny horror book from losing its edge or appearing to try too hard. Here are a few humorous elements used in YA horror to enhance the story, characters, or setting without sacrificing their horror-ness.

WORD PLAYS AND PUNS
Puns and other forms of wordplay can range from clever to groan-inducing, and they are a little of both in Croak by Gina Damico. In the novel a group of teens are training as grim reapers in Croak, a grim reaper town. The town of Croak is full of puns that make the place seem both folksy and weird.

The names of its streets are Slain Lane and Dead End, and the businesses are all named after euphemisms for death: Pushing Daisies florist; Bought the Farm grocer; and The Big Sleep mattress store, to name a few. Prominent people in Croak have punny names too. Their mayor is Mort, and the barkeep is named Corpp, owner of Corpp’s. On their own the puns are a little hokey, but in the book they are used without irony by characters, becoming a seamless part of the setting and providing a funny contrast to the macabre work of the reapers.

THE ABSURD
I am a sucker for absurdist humor. Lish McBride and William Ritter infuse their horror books with a good dose of the weird and unexpected as a way to distinguish certain characters.

McBride’s Hold Me Closer, Necromancer and Necromancing the Stone front-load the word play right in the titles, which are delightful and signal the reader not to expect a serious exploration of necromancy.

In Hold Me Closer, Necromancer, Sam is surprised to find out that he is a necromancer and invading on the turf of a much more powerful necromancer, Douglas. To send a message, Douglas beheads Sam’s friend Brooke then sends her reanimated head to him. Brook can still talk and boss her friends around. Everyone else spends a lot of time trying to figure out the physics of a high functioning disembodied head.

“I filled a small glass for her…Brooke took a sip and thanked me. I resumed my seat on the coffee table and set her glass to the side. Where did the water go? Come to think of it, how did she clear her throat?” (p 53)

They also find a bowling bag to put her head in so she can be carried around with them, her neck stump resting in the hole where the ball would nestle. Brooke’s functional, disembodied head in a bowling bag is so delightfully strange, it becomes a memorable part of the story and her character.

Later on we are introduced to Ashley, Sam’s ghostly assistant. She insists on being paid in an absurd amount of waffles.

“I want waffles. Take it or leave it.”

I glanced at Brid, who was staring at Ashley shrewdly.

“Let’s talk numbers,” she said. “Are we talking, like, twenty waffles all at once? Or a waffle a week for six months? What?”

Another ridiculous fate for a character is that of Douglas the waterfowl assistant in Jackaby by William Ritter. Early on Jackaby, a Sherlock Holmes-esque detective who specializes in the supernatural, briefly mentions a former assistant who “is temporarily waterfowl” (p 23). Later on we meet Douglas, the duck assistant who lives in a pond in Jackaby’s attic and, upon their meeting, shakes hands/wings with Abigail, the book’s narrator.

These goofy backstories for secondary characters don’t distract from the main plot but make those characters more memorable and offer a bit of comic relief.

Running gags have the quality of an inside joke; after the initial set up they become a little funnier each time they come up. In Jackaby, the detective Jackaby makes a self-deprecating joke about his handwriting:

“…one of [my assistants] rather rudely suggested it looked like the scribblings of a chimp.”

“Well then, you could always read it out for me to copy – or not copy it at all, just use it for your own reference.”

The unexpectedness of Jackaby agreeing with his former assistant about his atrocious handwriting is funny in itself, but when the joke comes back up out of nowhere, it’s that much funnier and also rewards a reader who is paying attention enough to connect the two jokes.

“What’s that you’re drawing?” I asked

“Is that elven language or something?…Are those pictograms?…The one that looks like a goose tugging a string?”

Sam, the college drop-out turned powerful necromancer, has a physical comedy gag of being rudely woken up by others, causing him to fall out of bed each morning. Not only is the physical comedy funny, but the fact that he starts every day falling on his face just reinforces the sad-sack quality of his life.

These are some of the more straightforward humor devices, able to be added in whatever dose fits your story. There are plenty of other humorous elements that are much more difficult to explain, such as parody, irony, or wit. I’m not at all qualified to go into those, but there are guides and resources available online and in print recommended by Gotham Writers Workshop and Writer’s Digest to help you with more humor writing techniques.

WHY HUMOR?
We’ve looked at some specific examples of humor in horror and how it enhances those particular books, but the combination also offers these broader benefits for your fiction and your readers.

MEMORABILITY
When I think back to dark humor books I’ve read, the funny parts really stand out. A well placed, humorous passage can surprise a reader, slow them down a bit, make them think or feel something, or inspire them to share the joke with another person. It becomes a point of engagement that is likely to stick with the reader after the book is over.

AUTHENTICITY
In a piece for The Atlantic, memoirist Sean Wilsey writes “Laughter and levity are important aspects of human life, even at its darkest, and writing that lacks those qualities denies the full richness of experience.” What I appreciate about novels of any genre that incorporate humor is that they reflect the reality that life can be ridiculous even while being scary or horrible. Teens, for whom every emotion is amplified and any setback can seem like certain doom, are especially in need of a reminder to laugh amid the horrors of life.

TEMPERING
When writing for kids and teens, you may need strategies that allow you to temper or balance the intense horror stuff. As R.L. Stine, author of the Goosebumps and Fear Street series told NPR in an interview, “I don’t really want to terrify kids. Whenever I have something that I think is kind of intense, I throw in something funny to lighten it up.”

Consider adding a little humor to your horror writing. You might be surprised by how well these seeming opposites work together.