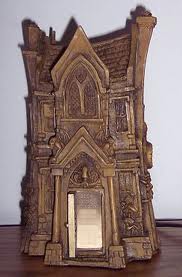 At long last, the anticipation is over. The Horror Writers Association announced the winners of the 2011 Bram Stoker Awards™ at its annual awards banquet tonight. This year’s presentation was held in Salt Lake City, Utah, at the World Horror Convention, and marks the 25th Anniversary of the awards.

Twelve new bronze haunted-house statuettes were handed over to the writers responsible for creating superior works of horror last year. This year’s winners are:

Superior Achievement in LONG FICTION
“The Ballad of Ballard and Sandrine” by Peter Straub (Conjunctions: 56)

Superior Achievement in an ANTHOLOGY
Demons: Encounters with the Devil and his Minions, Fallen Angels and the Possessed edited by John Skipp (Black Dog and Leventhal)

Works can be recommended by any member of the HWA. Juries in each category also compile their top picks, and members with Active status then vote works from both the member recommendations and the jury selections onto a preliminary ballot. From there the field is narrowed to the final ballot and Active members choose the winners from that. The award is named for Bram Stoker, best known as the author of Dracula. The trophy, which resembles a miniature haunted house, was designed by author Harlan Ellison and sculptor Steven Kirk.

Vampire Novel of the Century Award

HWA, in conjunction with the Bram Stoker Family Estate and the Rosenbach Museum & Library, also presented the special one-time only Vampire Novel of the Century Award to:

Richard Matheson for his modern classic I Am Legend

This award was voted on by a jury chaired by Dracula expert Leslie S. Klinger and was sponsored by Jeremy Wagner.

The Silver Hammer Award, for outstanding service to HWA, was voted by the organization’s board of trustees to Guy Anthony DeMarco.

The President’s Richard Laymon Service Award was given to HWA co-founder Karen Lansdale.

Samhain Publishing served as the Platinum Sponsor for the event.