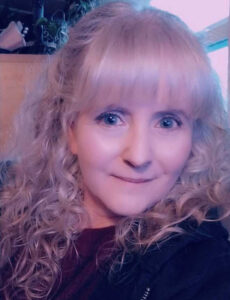 Tina Pavlik is a lifelong fan of horror and working on her first book series in the genre. She publishes dark fantasy and erotica in another life for Red Sage Publishing and Changeling Press. Her horror stories sometimes draw on her experiences as a historian, tour guide, and paranormal investigator of one of the most haunted locations in the U.S. She currently works in extras casting in television and film on projects like Amazon’s upcoming show The Peripheral and HBO’s The Righteous Gemstones. As an extra, she worked on Cinemax’s Banshee and Robert Kirkman’s Outcast and on films like Masterminds, Paper Towns, Halloween (2018), and The Eyes of Tammy Faye. She also writes entertainment and auto industry articles for Showbiz Cheatsheet and Motorbiscuit.

A love of reading. So many times, from a young age, books were my escape from some difficult times in life. I had no siblings so in the winter, outside of any chores or homework, that’s literally all I did. My mother read horror and romance novels. I started getting into them when I was a little young for either. I still love both genres.

I started reading horror when I was a pre-teen. Honestly, it was in an effort to convince myself that my life wasn’t so bad. And it worked. But I stayed because I loved those dark tales. I loved trying to guess what great evil was in the heart of each tale. I loved the dark wonders I encountered.

And I admired those writers. Anyone with the patience to tell the story that’s consuming them? I considered them talented. Being able to dig into your own fear, pull it out, and let it bleed all over your story? That’s taking it to an entirely different level.

Absolutely. In the novel I’m finishing, my first in the horror genre, my main character, and my primary antagonist are both female. And they’ve met before though they don’t immediately realize it. My heroine is struggling across lifetimes to find purpose, a sense of belonging. The villain is a woman who feels slighted because of her gender. It drives her ambition to prove the world wrong about her and her obsession to reach her dream no matter the cost.

I think it’s important to fully explore all sides of the female experience in fiction for women and those who identify as such.

Writing horror intimidated me at first. It should be easy. There’s no lack of horrible things going on in the world, particularly right now. You should be able to come up with a story and use the endless stream of horror in the real world for inspiration and example, right? It’s not that easy. It’s in those moments when you go down those dark paths that you view that nightmare world through the lens of your characters. Their belief system might be a lot different from your own. It leaves you with a lot to think about afterward.

I also learned that you end up painting the stories with traces of your own pain and past. It’s cathartic for me, a bit of therapy.

The horror genre has changed quite a bit in my time. I remember when horror novels featured women as beautiful serial killer victims or the romantic interests of the brave and brilliant heroes. Most of the time, not all, female characters were supporting players or collateral damage.

Now there are more and more horror films, TV shows, and books with amazing female leads who are free from old tropes and cliches. I expect the trend to continue and I’m excited about it. It’s an amazing time to be a horror fan.

Over the years, the rise of female characters in horror has been wonderful to see. And they aren’t merely female versions of typical male characters. Anne Rice wrote some of my favorite female characters with Akasha, Maharet, and Mekare from The Vampire Chronicles along with Stella and Rowan from The Lives of the Mayfair Witches. Rose the Hat from Stephen King’s Dr. Sleep was the scariest part of True Knot and I adore Vic McQueen from Joe Hill’s NOS4A2.

The female characters we’re seeing in film right now are also impressive and I’d love to see more of those. I love the return of Jamie Lee Curtis’s Laurie Strode in the new Halloween trilogy. I love Dorothy and Leanne from M. Night Shyamalan’s Servant. Adelaide Wilson from Jordan Peele’s Us was the perfect character for that terrifying original tale. Brianna Cartwright was wonderful in last year’s sequel Candyman directed by the fabulous Nia DaCosta. I also want to mention Fiona Dourif as Nica Pierce (and a younger Charless Lee Ray) in the new Chucky series that debuted last year because she was amazing.

More of any of those characters would be great, particularly from female storytellers. I’d love to see more trans women as leads in horror and stories from different cultures.

Aside from the ones I’ve already mentioned, I love Annie Wilkes from Misery, Alice and Woman from People Under the Stairs, Lorraine Warren from The Conjuring universe, Elise Rainier from the Insidious universe, Constance Langdon from American Horror Story, Merricat from We’ve Always Lived in the Castle, Casey Cooke from Split and Glass, and so many more.

Don’t hold back. Remember being a kid and all you needed was some paper and crayons or pencils? You’d just fearlessly color and draw on those pages and you didn’t stress out about being perfect or marketable. You just created. Get back in touch with that. Go wild. It’s so much easier to adjust a first draft that’s over the top than it is to go back and try to infuse a safe story with terror.

Write, write, and then write some more. Read when you’re not writing. Don’t worry so much about third-party perceptive. Your story has value. Your take on it and experiences have value. No one can write that story as you can. Go write the hell out of it.