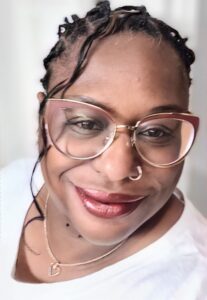 Rhonda Jackson Garcia, AKA RJ Joseph, is a Stoker Award™ nominated, Texas based academic and creative writer/professor whose writing regularly focuses on the intersections of gender and race in the horror and romance genres and popular culture. She has had works published in various applauded venues, including the 2020 Halloween issue of Southwest Review and The Streaming of Hill House: Essays on the Haunting Netflix Series. Rhonda is also an instructor at the Speculative Fiction academy.

Thank you so much for chatting with me today!

I think I sprang into being, full of curiosity, words, and stories. I’m the entire stereotype of the writer who always knew she was a writer, to the detriment of my poor mother, who I told I didn’t need to go to college because writers didn’t need a degree—and who had to endure my endless words, questions, and stories as I grew up. I used to write plays and stories for my two siblings and me to act out at home. Then, in middle school, I stopped torturing them and tortured my friend group, instead, since we all were writing singing group fan fiction. There has never been a time in my life that I wasn’t writing and reading incessantly.

The darkness and the allure of what lurks there. I have a naturally dark soul and I live in kinship with all the ways darkness intertwines with light. They don’t exist without one another, so as we have light and love, we also have darkness and evil. I also have an affinity for monsters. I was the kid who wanted to be the monster, with all the power imbued onto those creatures. Well before I had the verbiage to understand how monstrosity is assigned and who gets to do the naming, I realized all monsters aren’t necessarily bad—and that the monster can change, depending on who’s telling the story.

I do make a conscious choice to center the experiences of women, especially, Black women, in my writing. I want to first give these characters a voice within my beloved horror genre because we and our stories haven’t always been visible in these spaces. And even as the genre is becoming ever slowly more inclusive, the stories told from a feminine perspective can’t be expected to be a monolith: we all have different experiences and they’re all valid.

Horror provides necessary comfort and solace for me. The world is full of real monsters and evil, and when I can detach from the real-life ugliness and immerse myself in fictional world of created monsters and darkness, I still have the escape hatch where I can tell myself that no matter how realistic a story is, or what real-life events may have inspired it, that particular story is still fiction. There’s a detachment horror allows. Also, I need to bear witness to the stories in other creators’ heads. I see quite a few creators who say they don’t read or watch other horror when they’re writing, but I need to do this. This is where I fill my creative well and gain inspiration to keep telling my own stories. I never worry about duplicating their tales or ideas throughout, because we all would tell the same story differently, through our own personal lenses.

I’ve seen quite a bit of change. Much of it slow, but change, nonetheless. I miss the horror boom of the 90s when I saw my fave horror writers getting the spotlight with the top publishers in the ways they should have. I understand there were things going on behind the curtain that caused the following bust, though, so I’m also happy the indie horror scene has brought so much life back into our genre. They’ve not only filled the gaps to provide more horror opportunities across the board, they’ve also become the most inclusive players in the horror game. Indies create much-needed space for so many of us marginalized writers who can still find ourselves locked out in many ways.

I’m super excited about women in horror gaining more visibility and opportunities at every level. Of course, we need more. I’d like to see the genre working towards the point where seeing a woman direct a top-grossing horror movie or having a publisher pick up a multi-book deal with a female horror writer happens so often it doesn’t stand out as “strange” anymore. When we get to this point, horror creators will also gain more agency to explore female characters and female-centered experiences in our stories. So many times, we have to design female characters in restrictive ways, and tell our stories in prescribed ways, because their existences are only allowed to play out in accepted stereotypes, while authentic experiences are deemed to be “inaccurate” or are simply unpalatable. Readers and viewers haven’t been exposed to a variety of expressions of femininity. I’m ready to see female monsters lean completely into the most powerful monstrosity they can embody—without the stigma that comes from society’s ill-ease at seeing women behaving badly.

Sethe Suggs and her daughters, Beloved and Denver, from Toni Morrison’s Beloved are my all-time favorite female characters in horror. They were created with nuance and authenticity I’ll never stop admiring. Stephen King’s Annie Wilkes, from Misery, is another good one. Although I struggle with her misdeeds being hinted at as stemming from mental illness (mental illness does not equate evil), I appreciate the impact she has on Paul’s writing. She turned out to be a pretty good muse. New favorites are Adelaide/Red and Red/Adelaide from Jordan Peele’s Us. Talk about excellently nuanced Black motherhood experiences!

So, so many! Anything L. Marie Wood, Cina Pelayo, Tananarive Due, Linda Addison, V. Castro, Sara Tantlinger, Stephanie Wytovich, Laurel Hightower, and Hailey Piper are involved in are automatic buy-ins for me—as a reader and writer. On the horror academic front, I remain in awe at the scholarship Dr. Chesya Burke, Ashlee Blackwell, and Dr. Kinitra Brooks produce. Same with Tonia Ransom, of Nightlight Podcast. I’ve recently been introduced to the horror academic work of Lea Anderson, Anita Siraki, and Farah Rose Smith, and I’m a huge fan.

I would say to just speak your horror truths and make space for yourself without pushing others out. The writing game is set up as a competitive one and I don’t think it really is a competition in that we writers are fighting each other. If there’s any desire to be better than another or to “win”, I advocate challenging ourselves to become better writers as we go along and to compete with our own previous works. But some writers truly believe if they aren’t being published it’s because the playing field is way too big. I’m not talking about the actual gatekeeping practiced in publishing, but the idea that any writer(s) are entitled to take up space but can’t only because those spaces are being given, with no merit, to inadequate placeholders to push some kind of agenda. So, they then seek to push people out who they think don’t have value there. This has already been an ongoing thing for horror writers towards marginalized groups, with the newest targets to be added to the list are our more seasoned writers. This is ludicrous. We wouldn’t have our current horror genre if it weren’t for these trailblazers, and the idea they should move out of the way to allow “younger blood” to take over is just adding one more nasty “ism” to the long list. Some horror writers need to check their entitlement. None of us are owed a seat above anyone else—not when based on merit.

I don’t know that generations of women after me have had the same sense of humility drummed into them (I also realize a lot of this is also cultural), but I tell less seasoned women in horror to be loud and proud of themselves and their work. There’s nothing to be gained by presenting a false modesty and waiting around for people to give you opportunities. They may say you’re a nice person and tag you for a lot of service work, and if that’s your goal, cool. But if you want your work to be published and produced, you have to advocate for yourself whenever you can. And take pride in your publication road as you build the kind of writing career you want. You know have to let people know you’re here and you want to play. I also tell them we have to help each other. There is no real success if all of us aren’t able to succeed on the same terms. Cutting the ladder off once you get to the top won’t be as much fun as you think it is if you have to spend all your time cutting down the ladders others will eventually build to join you at the top, whether you fight them every step of the way or not. The goal shouldn’t be to exist as the only woman in horror who’s allowed to play. This energy is better spent helping other women in horror get where they want to be so we can all create and flourish.