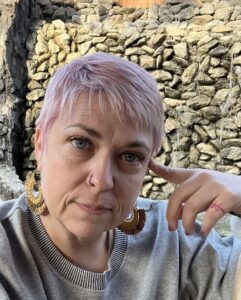 EV Knight is the author of the Bram Stoker Award-winning debut novel The Fourth Whore. She released her sophomore novel Children of Demeter as well as a novella, Partum in 2021. EV lives in one of America’s most haunted cities—Savannah, Ga. She is a huge fan of the Savannah Bananas and the beauty of Bonaventure Cemetery. When not out and about searching for the ghosts of the past, EV can be found at home with her husband Matt, her beloved Chinese Crested Gozer Augustus, and their three naughty sphynx cats.

I found horror as a genre when I was in sixth grade. I devoured it, every book I could get my hands on. It wasn’t long before I stumbled Pet Sematary by Stephen King. I loved the way he wrote, and for me, it was more than just the story, it was a craft that I wanted to learn.

It may sound crazy, but for me, horror is the most realistic of the genres. Even with unimaginable monsters, the fear is real. And fear is a universal emotion we have all experienced. So to work with such a powerful emotion gives me a sort of writer’s high I’ve never gotten from any other genre.

I absolutely do. I want to portray women as they are. We are strong, we are capable of handling some shit, and we are human and therefore also can be just as evil as men. I want my female characters to be independent—no man needed to make her evil; no man needed to help her defeat her foes.

From a personal perspective, I’ve learned a lot about myself. What I can and cannot do, where my “sweet spot” is when writing and what themes I tend to gravitate to again and again. It’s challenged me to see them and work hard to broaden myself as a writer.

As for the world, I probably see a lot more of the darkness in it than I’d like because I study it for my craft, but I also see this consistent resiliency in humanity that inspires me to keep going even on my own darkest days.

I love where horror is going. It’s certainly seen both a re-emergence in popular culture but also it finally seems to be getting recognition as a legitimate art subject. Movies, books, TV shows are getting just attention and praise. I’m also seeing a growth in inclusivity. Horror is wide open to anyone and the community welcomes and wants to hear more from those with different life experiences and I love that about us.

I think women have, for a long time, played the victim, the whore, the damsel in distress. Even final girls tend to just manage to run away and hide better than the rest not so much become the heroine. That is changing. I love that women are playing the hunter rather than the hunted, they are fighting back, and being recognized for it. I want to see this continue into the other side of things. I want to see a female version of Freddy/Jason/Leatherface, I want a female Hannibal Lecter. When teens are wearing t-shirts with badass women villains, I’ll be thrilled.

My classic favorite is Mina Harker. Mina’s only weakness was how hard she tried to play the role given to her by Victorian society. Mina saved that group of men so many times in the course of the book, she knew her shit.

Clarice Starling is another. Clarice has trauma that she really hasn’t ever dealt with because she has been so focused on proving herself in a man’s world. And she fights so hard because of the trauma but also, constantly suffers self-doubt as well. But her survivor strength gets her through and she never gives in. She grits her teeth and fights. I love that.

This is tough because there are so many I love both as friends and writers. I don’t want to miss anyone.

One specific up-and-comer that I think is going to make a big mark in horror is K.P. Kulski. She writes so eloquently about pain and suffering. The stories she writes are terrifying and heart-wrenching at the same time.

Be yourself. Write what you want, not what is hot right now or what your favorite author is writing. But most importantly, write.

Send me a friend request! Seriously, the horror community is such an amazing and loving group. They want everyone to succeed. Seek out other women horror writers and get to know us. We’ll help you any way we can.