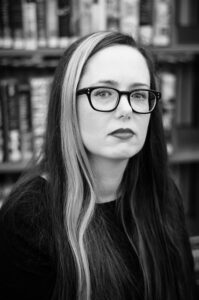 Emma J. Gibbon is originally from Yorkshire in the U.K. and now lives in Midcoast Maine. She is an award-winning horror writer, Rhysling-nominated speculative poet, and librarian. Her debut fiction collection, Dark Blood Comes from the Feet, from Trepidatio Publishing, was one of NPR’s best books of 2020 and won the Maine Literary Book Award for Speculative Fiction. Her stories have appeared in The Dark Tome and Toasted Cake podcasts, and the anthologies, The Muse & The Flame, Wicked Haunted, Wicked Weird and is upcoming in 13 Haunted Houses. Her poetry has been published in the HWA Poetry Showcase Volume VIII, Strange Horizons, Liminality, Pedestal Magazine, Kaleidotrope, Eye to the Telescope and is upcoming in Under Her Skin and Northern Frights. Emma lives with her husband, Steve, and three exceptional animals: Odin, Mothra, and M. Bison (also known as Grim) in a spooky little house in the woods. You can find her at emmajgibbon.com.

I’ve always been very engaged with stories, whether it was through TV or film, reading or even listening to people talk, from a very young age. I think initially my writing was a way to find out what I thought about things, to organize them on paper, and find my own voice. Because I think in story-mode, it was a natural progression to start writing fiction.

I don’t know if I had much of a choice, really. I was always attracted to scary and spooky things from a very young age, so I can’t remember what attracted me to it in the first place. I can theorize the elements that came together to lead me down this path, for example, I come from a part of the world that is naturally quite gloomy and has a kind of morbid and dark sense of humor, and my family were quite superstitious when it came to the supernatural. I’ve suffered from sleep disorders including chronic sleep paralysis all my life so perhaps it was a way to “control” what I was being frightened by. Growing up as a kid in the eighties, all of the heroines tended to be blonde and tanned and tall, and I was short and pale and dark haired, so I felt kind of sorted into the villain category anyway. So, when it came to writing, it came out dark. It’s not really something I can control. Other people thought of me as a horror writer before I even realized it!

Absolutely! I am very interested in portraying characters and telling the stories of people who have not traditionally been the center of stories. Because frankly, straight white men, especially middle-class straight white men, have had a hell of a run being the star of the show when it comes to literature over the years. What it all boils down to is that I write stories about the kind of people that I want to read about, so that includes women, especially unconventional women leading unconventional lives. I write about working-class women, older women, sex workers, trans women, women who don’t have a partner or children. I found that I couldn’t connect with many popular novels about fairly well-off women who have a family and live in the suburbs. There’s nothing wrong with those books, it’s just that these scenarios are completely alien to me.

That I’m a bit creepy!? I don’t think I know yet. It’s all still a work in progress, the world and myself.

I think the horror umbrella has grown over the years, not just with the different kinds of people who write and read horror, but the growth of different sub-genres and experimentation in different formats. My hope is that this will continue—a big healthy;/ eco-system of horror!

Women have always written horror. They were there at the beginning; we are here now. It’s not that we don’t exist—we’re legion! I think that what there has been is a disparity in opportunity. We see evidence of this when women horror writers of the past are forgotten, when there is still all-male TOCs out there when men overwhelming get movie options and TV writing opportunities. What I would hope to see is people making space for those opportunities and opening them up for people who haven’t traditionally had them. I want the people who have power over these things to interrogate their choices, as I think it’s unintentional half the time. Editors, look at those TOCs. Producers, consider why you don’t have any women (or people of color, or LGBTQ+ folks) writing your episodes. When you’re making space to pull people up, are you pulling people up who are just like you? My other great hope is that we as women can do the same, use our success to help each other up the ladder.

I know I’m going to forget a character that is absolutely key, so I’m just going to list them off the top of my head (and use the broadest possible definition of horror):

Every female character in The Bloody Chamber by Angela Carter

Again, I’m going to forget someone and be mortified, so off the top of my head:

and so, so many more!

To write whatever is in their weird, creepy hearts, and not to hold back for fear of readers’ reactions. The only times I’ve regretted anything in my writing is when I have had a failure of courage, and not gone as far as the story needed to.

Get your stories out there—don’t self-reject. You only fail at this if you don’t try. And welcome to the community! Horror writers are genuinely some of the nicest folks out there—welcome to the family!