February is Women in Horror Month! The HWA is celebrating by posting interviews with award-winning authors. Following is an interview with Sèphera Girón who won the Silver Hammer award for volunteer work in 2008.

SG: I joined the Horror Writers Association when it was Horror Writers of America back around 1992 or so. I was one of the ones, back when we used to hang out on an online platform called “Genie” through the SFF-NET community, that rallied for a name change and we got it. After all, HWA consists of people outside of the United States. After I was a member for a few years, I took over the Canadian Chapter from Edo Van Belkom. I also created the Canadian Content Corner column in the newsletter, which was a tongue-in-cheek nod to Canadian politics at the time. Julianne Snow is handling the column for me this year while I focus on other areas of our chapter.

I began to host monthly meetings and booked booths at Toronto events such as The Word on the Street. As the HWA has evolved, my ability to book more events for our chapter has grown and we do all kinds of events in the Ontario area including Fan Expo and Toronto Comicon. I’m not sure how active the rest of Canada is with regard to actually having booths at conventions and such.

The HWA hasn’t influenced my actual writing at all but it gave me opportunity to help other writers network and learn about opportunities as well. This was much more important in the past than in the recent few years when social media has become part of our every day lives. In a world before internet, the HWA newsletter that came to your physical mail box and my monthly meetings were the only touchstones for market news, agent news, and so on.

Having opportunities to showcase my work at conventions and comicons as a member of HWA definitely helps raise my profile.

SG: I was surprised and pleased to be recognized for, at that time, over ten years of volunteer service to HWA. My chapter pitched in to send me to Burbank to pick up the award. The award was presented on my mom’s birthday and though I gave a speech that recognized my parents who currently live in Canada, the internet live feed didn’t work so they never got to see it as it wasn’t recorded either.

I don’t think anyone even knows that I won a Silver Hammer Award (except for the people who saw me receive it that year) nor do I think most people know what it’s for. But I’m thrilled as hell to have it and keep it nearby at all times in case there are any break-ins!

SG: I never used to believe that gender mattered much. In the eighties and nineties, I felt that woman had an equal kick at the can. Certainly, I never felt restricted in my own career back then. However, as the world has shifted, many people, readers that is, not editors, have become much more vocal (to my face) about how women writing horror isn’t scary and so on. Obviously they’ve not read Mary Shelley’s Frankenstein nor other women writers’ horror work.

I’ve been encouraged in my career by other professionals and have never felt slighted by editors or publishers for being a woman. It seems to be only the readers who have an odd perception about lady writers.

SG: Write the best story you can. Don’t self-censor. Don’t impose self-limits. Editors and publishers want a good story. They used to say write a lot of short stories to build an audience for novels. I’m not sure it matters. Write what you want to write. And if you’re going to self-publish, for the love of words, please hire an editor. It doesn’t have to be me, though I’m always thrilled to work with horror writers, but hire a professional pair of eyes to comb your work objectively.

SG: I’m in two anthologies that just hit the scene!

Group Hex Vol. 1 edited by Andrew Robertson is a collection of stories from my Ontario Horror Writers Association Chapter although it’s published as a Great Lakes Horror Company product. The Great Lakes Horror Company Podcast was created by Andrew and you can find us on iTunes discussing all things horror. https://read.amazon.ca/kp/embed?asin=B01MYZSY48&preview=newtab&linkCode=kpe&ref_=cm_sw_r_kb_dp_FRLKyb5AX9F91

Intersections: Six Tales of Ouija Horror contains my story, “The Next Big Thing” which is told by a street kid turned mentalist looking for the ultimate illusion. https://read.amazon.ca/kp/embed?asin=B01N97S2O5&preview=newtab&linkCode=kpe&ref_=cm_sw_r_kb_dp_NZLKybWQ8WP5Y

The Witch Upon a Star series from Riverdale Avenue Books will have some new installments this year so please pick up the books that have already been published. Capricorn: Cursed, Aquarius: Haunted Heart, Pisces: Teacher’s Pet, Aries: Swinging into Spring. https://read.amazon.ca/kp/embed?asin=B01CUH84QW&preview=newtab&linkCode=kpe&ref_=cm_sw_r_kb_dp_50LKybSWN99X8

I’m working on a science fiction book that will be published soon as part of a series, likely under the name Tommy L. Walker as I experiment with how my work is received writing as a man in another genre! I thought that I’d throw this new not horror project in for this women in horror interview as it’s something that the women science fiction writers struggle with as well! I think this book will be called S.O.R.A.N., Book One: The Quest. If you want to watch me struggle through the entire process of writing a book, picking names, and creating worlds, you can see it on http://www.patreon.com/sephera. 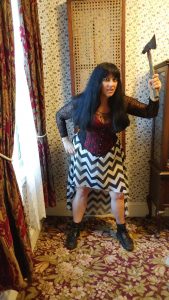 Sèphera Girón is the author of over twenty books, mostly in the horror genre. She is also a freelance editor, and a tarot counselor. Sèphera is the Ontario Chapter Head of the Horror Writers Association and one of the founders of the Great Lakes Horror Company Podcast.

Check out your weekly horoscope for FREE right here! http://www.youtube.com/sephera