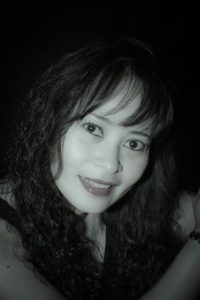 February is Women in Horror Month! The HWA is celebrating by posting interviews with award-winning authors. Following is an interview with Rena Mason, who won the Bram Stoker award in 2014 for her short story, “Ruminations,” in 2013 for her first novel, The Evolutionist, and won the Silver Hammer Award in 2014 for volunteer work.

RM: I wrote The Evolutionist in Olympia, Washington after moving from Las Vegas where I’d lived for nearly a decade. Writing the story was a catharsis of the time I’d spent in Sin City. I kept thinking about how surreal my life there was, and that there had to be some other reason I’d strayed so far from being the person I knew to be me. In my story, I created external forces beyond my main character’s control for the reasons behind the changes, adding horrific elements and then compounding them, causing her to flee. The most humorous part to me about writing the work was that many of the real experiences written in the book had to be toned down to make them more believable for readers. But that’s Las Vegas life, sometimes what happens there is too outlandish to be true, yet is.

My short story “Ruminations” came from reflections, and how the person looking back from them always appears to be different in some way. The story had originally been written for an anthology with a chiral theme. Because of my love for science and parallel/alternate universe theories, the story took on a science fiction life of its own as I wrote on. Many of my characters are based on real people and real experiences that I write metaphoric twists into, turning their lives upside down for reasons other than the actual realities. Unfortunately, the story was rejected for the chiral theme. But the editor, Michael Bailey thought it would work for his next science fiction anthology and asked me if he could hang on to it. I’d written the story for him, so I was glad to have him keep it. The anthology Qualia Nous turned out to be a beautiful book from cover to back cover and I was proud to be a part of it. I hid a lot of numeric and alphabetic ‘Easter eggs’ throughout the story, which was a lot of fun for me.

RM: I was so nervous about having to go up and receive a service award for a dear friend who couldn’t be at the awards ceremony that it stole my focus away from anything aside from walking up to the stage and podium without tripping, then reading his acceptance speech without messing it up for him. I was on the Final Ballot for my Long Fiction piece East End Girls that year as well, and they announced the Finalists for that category first. So, when my name wasn’t called as the winner I thought, Okay, I can handle this. I’d finally calmed down after giving my friend’s acceptance speech when they called my name as the winner in the First Novel category. All the anxiety about going up to the stage and saying anything at the podium flooded over me again. I was overloaded with emotions by the time I got up there, and my friend’s acceptance speech flashed before my eyes, striking a new fear that I was going to read parts of it back from memory. To this day I have no idea what I said, but I did forget to thank a few people, which I felt bad about afterward. After winning the award I received a steady stream of invitations to submit work for, and inquiries from a few publishers asking what I was working on next. It has been very flattering, and I’m very humbled by it all, but it has also taken away time I need to finish my second novel.

RM: It’s the same advice I’d give any author male or female. Set reachable goals. Focus on writing the best story you can. Avoid the advice that you need to make a name for yourself first. Learn how to self-edit your work. Revise and rework your story. Put it away then revise and rework it again and again until you’re just adding and taking away commas. If you’re in a critique or beta group, let the members read it and make suggestions. Make revisions and rework your story regarding your group’s comments that you’d agree with. Then hire a reputable editor. Joining writers organizations can be a big help for those looking to break into genre fiction. I recommend joining them, especially if you’re not familiar with writing groups or other writers in any way. The Horror Writers Association taught me a lot about writing in general, and it helps to be part of a like-minded community that encourages you and has resources. Be true to your work and to yourself; it will show through in time.

RM: As hard as it was to turn down a few great invites to submit works to, I’ve staved off writing any short fiction this year so that I can dedicate my writing time to finishing up a novella which I have a deadline for, and my second novel. I believe I have a few short stories that will be published this year that I wrote last year.

Rena Mason is the Bram Stoker Award® winning author of The Evolutionist and East End Girls, as well as a 2014 Stage 32 / The Blood List Presents: The Search for New Blood Screenwriting Contest Finalist. A longtime fan of horror, sci-fi, science, history, historical fiction, mysteries, and thrillers, she began writing to mash up those genres in stories revolving around everyday life.

An R.N. and avid scuba diver, she has traveled the world and incorporates the experiences into her stories. She currently resides in Reno, Nevada with her family.

For more information about this author and her latest works, check out her website: www.RenaMason.Ink