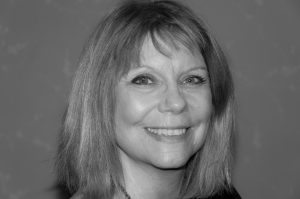 February is Women in Horror Month! The HWA is celebrating by posting interviews with award-winning authors. Following is an interview with Nancy Holder, who has won the Bram Stoker Award five times for her short fiction and novels.

NH: I have received five Bram Stoker awards. This is my list:

I’ve been nominated for two others, in Young Adult and in Anthology with my co-editor Nancy Kilpatrick, AKA The Beauteous Canadian.

I was extremely surprised by my Novel win, as Stephen King was also a nominee that year, and I also won in the Short Fiction category that year. Quite a heady experience! At the awards banquet, right out of the gate, one of the introducers for a speaker got a little carried away and ran very long, so there was a crazy dash by the women in the audience to hit the restroom before the actual awards were given out. I got there first and blocked the way, demanding fifty bucks from anyone who wanted to use the loo. There was a coup d’état but I still got to go first.

I had asked for the vegetarian plate at the banquet and it was very skimpy—one new potato, two carrots, a piece or two of broccoli—and after the awards came the champagne. I got a little wasted and did an Annie Wilkes on Peter Straub—“No, I really am your number one fan. I mean, I am”—but his wife assured me that I had not make a complete ass out of myself.

NH: The website offtheshelf.com listed Dead in the Water among “13 Best Suspense Novels Written by Women: From Agatha Christie to Gillian Flynn” for their February 7 post, so it was very gratifying to see that people were still reading it. Also, I did some research for it by staying overnight on the Queen Mary Hotel in Long Beach, where StokerCon is being held this year—and I’m the Toastmaster. So that’s pretty cool.

NH: There’s a yes and a no to that. I still think women tend to get overlooked, but I also think women don’t put themselves forward enough (I’m speaking here of the pushy American way of doing things. I would actually prefer it if we behaved more like Canadians, but we don’t.) Many years ago I was at a Women in Film presentation at the Paley Center in Los Angeles, and one of the panelists (I think it was Sherry Lansing) said that when she said no to a woman, that woman never came back to her and tried again. It was frustrating to her because some of these women came very close and she would have liked to work with them. She said “No” didn’t faze men in the same way. I gleaned that what she was saying was that “No” really meant “Not this time” to a man while “No” seemed to mean “Go away forever” to a woman.

I do think there’s more mindfulness nowadays to including women in anthologies and asking women horror writers to contribute to other kinds of projects. And I’d like to point out that out of sixteen presidents of HWA, we’ve had five women presidents. That’s pretty good!

NH: Know the field and read, read, read. Don’t apologize. Be polite but firm. And be professional. If you get a no, try, try again.

NH: I’m finishing the novelization of the new Wonder Woman film—very excited about that!—and co-writing a new Buffy Encyclopedia to celebrate the 20th anniversary. My co-contributor is my original Buffy editor, Lisa Clancy, so that’s a dream come true. I’m working on a Gothic project I am super excited about but I can’t talk about it much right now. I’m also working on some short stories.