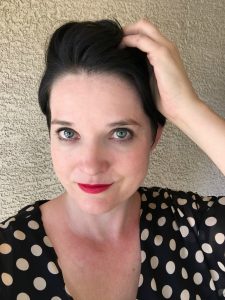 February is Women in Horror Month! The HWA is celebrating by posting daily interviews with award-winning authors. Starting off the month is an interview with Mercedes M. Yardley, who won the Bram Stoker Award in 2015 for her long fiction piece, Little Dead Red.

MMY: My winning piece was a novella titled Little Dead Red. LDR is a modern retelling of Little Red Riding Hood that’s deeply rooted in real tragedies. It has to do with sexual abuse, kidnapping, guilt, revenge, and justice.

I cried while writing this piece, and doubted myself horribly. How do you deal with such terrible situations in an accurate, unflinching, yet respectful manner? I didn’t want to portray the acts directly, but preferred to display the aftermath. I was deeply humbled that I received several emails from people who said they identified with the characters in the story and that I had told it accurately and with sensitivity. People said it touched their souls, and nothing could mean more to me.

MMY: Oh my goodness! I was the dorkiest award winner ever! I was so certain I wasn’t going to win that I wasn’t even paying attention and missed my name being called. I was wearing six inch heels and nearly tripped on my way to the pulpit. I didn’t have a speech prepared. I just grinned like a fool and garbled out a very sincere, heartfelt thank you before staggering back to my seat.

Winning put me on the map in a way that hadn’t happened before. People were interested in doing interviews and that was enjoyable. I had a few agents approach me instead of it happening the other way around. But what was most profound is that the award validated me in a very meaningful way. I had a friend say to me, “You’re a Bram Stoker award winner now. Your time is worthwhile. Work on what is important to you.” They were wise words. It’s almost as if that award gave weight to what I wanted to say. It was a nearly magical totem that gave me the power and courage to say no to some projects and stop stretching myself so thin.

MMY: I do think women face more difficulties. Horror is becoming much more accepting and I’ve seen positive changes in the last eight years, but it still takes a while to break in and become respected. I find that the authors and publishers are welcoming, but the readers still have a prejudice about women. They’d rather read horror from a man. They tend to think women are soft. I also think people are surprised to meet me and find I write horror. As a woman, I’m too soft for those who want hard horror, but I’m too hard for a “typical” woman. It’s a bit like straddling a line and finding each side thinks you’re lacking.

MMY: Just do it. Break in. Write your heart out. Don’t be discouraged. Say what you have to say and do it in your unique way. There’s room for all of us. I also think women are uniquely wired for horror. We spend our lives being taught about fear. We’re taught to be afraid, to protect ourselves. We have blood course from our bodies monthly. We grow beings inside of our abdomens, and eventually they break free. We are hardcore.

MMY: I’m especially excited to have a beautiful, limited edition short story collection called Little Dead Red and Other Stories coming out in a few months from Vault Books. It will be hand numbered, signed, and bound in leather. It’s going to be gorgeous and the art made my jaw drop! I can’t wait for it!

I’ll also have a novella called “Skin of the Bear, Bone of the Witch” coming out from Golden Goblin Press, as well as the second book in the Bone Angel trilogy titled “Heartless: The Demon Prince.” I have a dark, lovely story called “The Boneshaker’s Daughter” coming out in the Lost Citadel anthology this year. I’m excited for that one because it’s more epic fantasy than what I usually write. I’m keeping busy, and that’s exactly the way I like it.