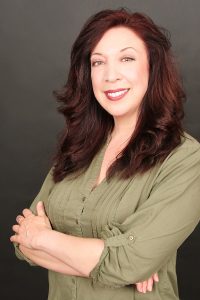 February is Women in Horror Month! The HWA is celebrating by posting interviews with award-winning authors. Following is an interview with Maria Alexander, who won the Bram Stoker Award in 2014 for her first novel, Mr. Wicker.

MA: Thanks so much for having me! Mr. Wicker’s history is long and torturous. It started many years ago as a novelette that I very quickly adapted to a screenplay, which, in turn, was a Quarterfinalist in the Academy Nicholls Fellowships in Screenwriting. After a series of disappointing meetings where I discovered the film industry wasn’t ready for (nor had they even heard of) urban fantasy outside of Tim Burton, I decided to adapt it to novel. It took a long time, and I wrote a few other books in the meantime, but it was (much to my surprise) the first book to be published.

I was beyond thrilled to have such great reviews from the trades, such as Publisher’s Weekly. The starred review and “Debut of the Month” designation from Library Journal was worth every step of that long, fraught path to publication.

If you really want to know what inspired Mr. Wicker, I originally made a puzzle trail with videos revealing the magical backstory. I unlocked the videos a year later on my blog in the post, “The Strange Yet True Story Behind the Book, Mr. Wicker.”

MA: I was very surprised. I’ll be honest: people at the World Horror Convention told me to my face I wouldn’t win. It was devastating and demoralizing. I knew I had tough competition. I had no illusions about that, but the insensitivity of some folk was jaw dropping. I’d promised my friend David Gerrold that I’d write an acceptance speech. He’d made me promise at dinner one night about a month previous. I’d planned to pen something in my hotel room the afternoon before the event. Instead, I just went to my room and curled up. I was recovering from major foot surgery. So, I wasn’t feeling well to start with, and then that happened.

When it came time for the awards dinner, I decided to drink and have fun. I wasn’t going to win, right? Unfortunately, I drank a wee bit too much. When my name was called, I was in total shock and unprepared to say anything. I wound up talking too long. But you know what? Everyone survived the experience, and apparently I made a favorable impression on certain editors I spoke with later. But I’d have rather not been devastated and just penned a little speech, you know?

MA: I’ve had numerous problems that I can’t pin on gender discrimination for certain, but they were damned inexplicable otherwise. Mostly that I’d send stories to magazines that were apparently black holes posing as publications. For a long time, I tried not to think it was gender bias, but I’m inclined now to think it was because some of the stories by men they’d publish were far less mature and certainly not as well written as mine. To this day, when a man publishes a novel or short fiction collection, another man is quick to call him “a master of the genre” even if they’re newbie writers. But women? No one dares, no matter how skillful they are.

MA: Try to be different. Don’t fall into writing about the same old tired tropes. Find your own voice – what scares you, what fires you up – and write from there. Don’t be afraid to reach out to other women authors and ask questions, either. And join writer’s organizations like the HWA. You’ll find a wealth of information and community there.

MA: I’m finishing Inversion, the sequel to my YA novel, Snowed, which is currently on the Preliminary Ballot. And I have a story that’s been short-shortlisted for a new anthology. It’s called “Neighborhood Watchers,” and it’s an affectionate, yet horrifying homage to Michael Marshall Smith, one of my favorite authors. If you attend StokerCon 2017, you’ll get to read my essay about the importance of George R.R. Martin to the horror genre in the program book.

I’m also writing the first novel of my next YA series, which is about La Maupin, the deadly swordswoman who lived in 17th century France. There’s as much magic in France as a thousand Englands – and none of it’s good. The country needs the blade and bravery of the gender-fluid La Maupin to save them from the darkness rising before it’s too late.