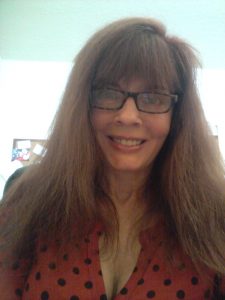 February is Women in Horror Month! The HWA is celebrating by posting interviews with award-winning authors. Following is an interview with Lucy Taylor, who won the Bram Stoker Award in 1995 for her first novel, The Safety of Unknown Cities.

The overall concept for SAFETY came from my observation that I always felt most at ease when traveling alone in cities where I’d never been, where I knew no one, and no one knew me. I took that desire for sanctuary as well as for the possibility of exotic liaisons and transferred it to my character Val, who enjoys both an abundance of wanderlust and a taste for the forbidden and the erotic, preferably combined. SAFETY was great fun to write, as I was able to draw on past experiences and fantasies and kill off a couple of characters in exceptionally gratifying ways.

About winning the award – how surprised were you? Did winning pay off in any interesting ways?

LT:  Good question. I wasn’t totally surprised, because I remember having a conversation with Harlan Ellison in which he ‘strongly’ advised me not to miss the World Horror Convention that year, so I admit I had my hopes up. Also very exciting was the fact that Joyce Carol Oates won a Stoker that year in the Best Novel category for ZOMBIE, so it was wonderful meeting her as well as Harlan Ellison.

As far as the second question, winning a Stoker was wonderful in many ways—hey, it got me this interview!– but overall I can’t think of anything in particular. It raised my visibility and has always been a cool thing to put in bios, which is enough.

LT:  To some extent, yes, but I also think things are changing. I often hear comments from editors about trying to get more women authors in their anthologies, and that seems to be happening to some extent. And there are, occasionally, all-women anthologies such as Billie Sue Mosiman’s FRIGHT MARE and the upcoming MARY SHELLEY’S DAUGHTERS, edited by Alex Johnson and Kitty Kane. The women only anthologies are great in one sense, but I also think it’s unfortunate that we need them in order to get more work out there by female authors. For that matter, I wish we didn’t need a special ‘Women in Horror’ month. Does this mean every month is “Men in Horror” month?

Are there societal expectations at work? It would seem so. Invariably, when I tell someone I write horror, I get a surprised reaction and even disbelief, i.e. “But you look so sweet!” or ‘But you seem so nice!’(although when it comes to writing, I don’t really aspire to either). Do male horror writers evoke this same reaction? I have my doubts, but if you do, guys, let me know.

LT: I would say, read, read, read. See what works and what doesn’t. Keep up with the world of small press publications and online sites, such as Gamut and Tor.com that publish quality horror. And above all, of course, write. You’ve also got to be fearless about submitting your work and dealing with rejection, which is just part of the game.

I guess it goes without saying, but don’t ever censor yourself because something you’re writing seems to go outside the bounds of what many would consider ‘good taste’ or the like. Fuck that. Give yourself full creative freedom.

LT: I have stories appearing in the anthologies THE FIVE SENSE OF HORROR (March, 2017) and MARY SHELLEY’S DAUGHTERS (later this year) and a science fiction novelette called “Sweetlings” that will be published on Tor.com in early May. Several of my stories are already available (or will be soon) on the app Great Jones Street, which publishes fiction in all genres and is well worth investigating.

A new edition of THE SAFETY OF UNKNOWN CITIES will be published by The Overlook Connection Press in the first half of this year, with illustrations by acclaimed horror artist Glenn Chadbourne.