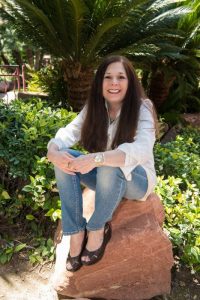 February is Women in Horror Month! The HWA is celebrating by posting interviews with award-winning authors. Following is an interview with Lisa Mannetti, who won the Bram Stoker Award in 2008 for her first novel, The Gentling Box.

LM: The Gentling Box is set in 19th century Hungary and Romania and is the story of Imre, a half-Rom and Hungarian horse trader who is beset by his mother-in-law, a villainous sorceress named Anyeta who relentlessly pursues him and his family (including her own daughter) by working the powers in a vile charm known as “the hand of the dead.” The crux of the novel is Imre’s own horror at employing a technique to tame wild horses known as “gentling,” which involves a crude form of lobotomy; he has never used it because having seen it as a child, he cannot bear observing the staggering horses in so much distress and pain. Thanks to Anyeta’s machinations, he’s forced to decide whether he’ll have to “gentle” his friends, other members of his troupe and his own wife in order to save their young daughter.

I was influenced by many of Coleridge’s so-called demonic poems, Rom lore, occult practices, and a host of 19th century writers, and am very glad to say the novel was well received by the critics.

The most interesting (for me) anecdote about the book is from the very first time I read aloud from it (which was the flashback to Imre’s first experience as a nine-year old boy observing his own father “gentling” horses), people wanted to know if gentling was a real technique used among Rom horse traders and how I learned of it. This question came up over and over. I think it’s safe to finally reveal at this point, it was completely a product of my own imagination and it was one of the most exciting concepts I ever came up with as far as spurring me to tell this story.

LM: I was certainly surprised in the sense that (just as in every category each year), there are many fine writers’ works contending for the award and in my case that was certainly true. I was hopeful, but by no means convinced I’d win.

The two biggest pay-offs were: First, that since the book had made the rounds of several major publishing houses under the aegis of two well-known and well-respected literary agents, it was a vindication of my own belief in the work (and myself.) I felt—in my secret heart of hearts—during all those years it was worthwhile, and winning made me feel that other professionals and colleagues had the same perception—an enormous relief. The second pay-off was that winning the prestigious Bram Stoker award enabled me to place the book with a different press from the initial small publisher and, as a result, I was able to move from affiliate to active membership in the HWA—this was another excellent reminder (or validation) to keep the faith: keep writing, keep hoping, keep believing in my abilities. It came at a time when my self-confidence—especially after my mother’s death—seriously needed some bolstering.

LM: I do think the situation for women in horror has improved tremendously in the last five to ten years. At the same time, I do see inklings here and there of what one could call “the old boys’ network”—even if the “boys” aren’t old and are new to the genre. I can’t tell you how many times I’ve been at a social function and upon learning I’m a writer I’ve heard “I bet you write romance.” My perception is that more ado is made of male writers’ work than their female counterparts on the whole. That said, I do believe we are making strides and approaching more balance and parity for women writers in the genre. I should also add there are many male writers who go out of their way to champion women’s work. Bravo, I say—and heartfelt thanks!

LM: Read, read, then read some more. Read everything that interests you in and out of the genre. Reading in the genre can help you weed out those ideas that have been done to death—or at least inspire you to create a new approach to tropes. Reading out of the genre will a) help you flesh out your ideas, b) enhance your crafting and technique c) teach you even more about good vs. bad writing. Reading non-fiction can help provide a basis for plots and characters (example, psych books can help with character development). In my opinion, reading is absolutely an integral part of the job—and just like the writing itself, you should be doing it every day.

I’d also suggest joining the HWA—where you’ll find all kinds of resources including mentors, to assist you. It’s made a huge difference in the careers of many women writers I know—myself included.

LM: I have some short stories that will be out in the near future, I’m thrilled about the Italian translation of The Box Jumper (Houdini, Passionae Oscura i.e. Houdini: Dark Love). I’m working on a novel set in the Post-WW I era about the dial painters’ tragedy called Radium Girls, and I hope people like this curiosity about an afflicted woman, her life in a circus freak show and the supernatural. After that, my unconscious is urging delving back into a book I started some time ago tentatively titled The Everest Haunting. Meanwhile, thanks for this opportunity to participate in the HWA’s Women in Horror Month celebration.

Lisa Mannetti’s debut novel, The Gentling Box, garnered a Bram Stoker Award and she has since been nominated four times for the prominent award in both the short and long fiction categories: Her story, “Everybody Wins,” was made into a short film and her novella, “Dissolution,” will soon be a feature-length film directed by Paul Leyden. Recent short stories include, “Esmeralda’s Stocking” in Never Fear: Christmas Terrors; “Resurgam” in Zombies: More Recent Dead edited by Paula Guran, “The Hermit” in Never Fear: The Tarot, and “Arbeit Macht Frei” in Gutted: Beautiful Horror Stories. Her work, including The Gentling Box, and “1925: A Fall River Halloween,” and The Box Jumper has been translated into Italian.

Her most recently published longer work, The Box Jumper, a novella about Houdini, was not only been nominated for a 2015 Bram Stoker Award and the prestigious Shirley Jackson Award, it won the “Novella of the Year” award from This is Horror in the UK.

She has also authored The New Adventures of Tom Sawyer and Huck Finn, two companion novellas in her collection, Deathwatch, a macabre gag book, 51 Fiendish Ways to Leave your Lover, as well as non-fiction books, and numerous articles and short stories in newspapers, magazines and anthologies. Forthcoming works include, “Apocalypse Then” in Never Fear: The Apocalypse, several other short stories, and a dark novel about the dial-painter tragedy in the post-WWI era, Radium Girl.