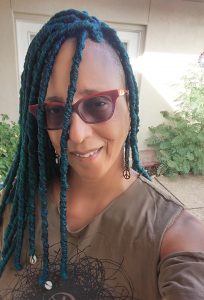 February is Women in Horror Month! The HWA is celebrating by posting interviews with award-winning authors. Following is an interview with Linda Addison, who has won four Bram Stoker Awards for her poetry collections: Consumed, Reduced to Beautiful Grey Ashes (2001); Being Full of Light, Insubstantial (2007); How To Recognize A Demon Has Become Your Friend (2011); and Four Elements with Charlee Jacob, Marge Simon and Rain Graves (2014).

LA: I won my first Bram Stoker for my poetry collection Consumed, Reduced to Beautiful Grey Ashes, (Space & Time, 2001). This was my second collection in print and I was on the final ballot with my heroes: Bruce Boston, Chad Hensley, Charlee Jacob, which by itself was very inspiring. In general, I submitted my poetry to publications that also published these three poets (and others), so I was deeply honored to be on the ballot with them. It was only later that I discovered I was the first African-American to receive the award in any category!

After this win I received three more Bram Stokers for collections: Being Full of Light, Insubstantial (Space & Time, 2007); How To Recognize A Demon Has Become Your Friend (Necon E-Books, 2011); and Four Elements with Charlee Jacob, Marge Simon & Rain Graves (Bad Moon Books, 2014).

For my poetry collection Being Full of Light, Insubstantial I challenged myself to write 100 poems because a couple of reviews mentioned, besides good points about my prior book, they wished it contained more poems. I didn’t know if I could actually do it, so accomplishing my goal felt amazing. The moment I held the book in my hands with a cover created by my son, Brian Addison, I was beyond happy; then having the collection receive a Bram Stoker was mind-blowing.

LA: I was actually stunned to win since I was on the final ballot with authors I admired greatly. Since the ceremony was in NYC, my mother came to it from Philadelphia. It meant the world to have her see me receive the award since her storytelling in my childhood fed my want/need to write. As the years went by she developed Alzheimers and passed in 2009, she held the memory of my winning that first Bram Stoker for a long time.

I was surprised and honored by Germantown High School in Philadelphia (I graduated in 1970) by being invited to speak at the graduation service in 2002. They even had a tea party for me in the school library, where I spent so much time when attended Germantown HS.

I’m always touched when young writers tell me how much it means to meet me. In the large field of writing I don’t assume that others know about me.

LA: It’s pretty clear in the wider world that women face more problems in fields where men dominate. I don’t have any personal experiences to point to because no one has treated me badly, but I have heard other women authors tell of having issues as horror writers. I’m glad there is an increase in conversation and attention about the need for inclusiveness on many levels of our field. Part of the challenge is convincing people to read/publish outside the names they are familiar with; this is happening slowly.

The gatekeepers (editors, publishers, agents, etc.) have a lot to do with evolving the horror landscape. Not only is there a need to be more aware of the need for diversity, but they also need to become more diverse.

I’m part of the HWA Diverse Works Inclusion Committee and we’re tasked with introducing the membership to creators in The Seers Table column of the monthly newsletter that they may not know about. It’s a way to put names and work out to members that they wouldn’t necessarily choose. I hope it’s making some impact.

Another project I’m involved in that I hope will introduce interesting new voices to the field is Sycorax’s Daughters, an anthology of 28 horror stories and 14 poems written by African American women writers, and edited by myself, Kinitra Brooks and Susan Morris from Cedar Grove Publishing. It is currently available for pre-order.

LA: Be fearless. Don’t look at a market and let the fact that you don’t see many women in it discourage you, just jump in. Know your chops, write as well as you can and keep improving. Write your fears, your pain as smooth or rough as you want. Know that your voice is unique, your story needed because what scares you will disturb others and, after all, isn’t that what any horror writer wants to do, whether they have a womb or not.

LA: I’m excited for the February 25 release of Sycorax’s Daughters, an anthology of dark stories and poems written by African American women writers, edited by myself, Kinitra Brooks and Susan Morris from Cedar Grove Publishing.

I’m breathlessly looking forward to having a film based on one of my poems made this year into a movie. The film is called One Night Stand: A Love Story, and will be directed by Jamal Hodge of Primal Links Media (www.directorhodge.com). I’ll be involved in my first crowd-funding for the project this month and will have more information on this in social media land!

Another film project I’m delighted to be part of is 7 Magpies Movie, an anthology film project conceived by L.C. Cruell. The film is being created with work by 7 black female horror authors & 7 black female filmmakers based on the old nursery rhyme. Keep up with its development at site: https://7magpiesmovie.com; twitter: https://twitter.com/The7Magpies; facebook: https://www.facebook.com/7MagpiesMovie/.