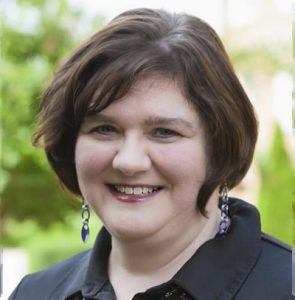 February is Women in Horror Month! The HWA is celebrating by posting interviews with award-winning authors. Following is an interview with Donna K. Fitch, who won the Silver Hammer Award in 2006 for her volunteer work.

DKF: I’ve been a member of HWA for about 17 or 18 years. It’s been amazing being associated with so many talented writers. I’m not active in discussion boards, but volunteering behind the scenes has given me insight into the workings of the association. I’ve been the HWA Newsletter web editor (not to be confused with the editor, the wonderful Kathy Ptacek!) since July 2013. Working on the newsletter raised my awareness of many writers I wouldn’t have known of otherwise. One of the delights to me has been posting Marge Simon’s Blood and Spades column. I haven’t written poetry in years, but I’m newly encouraged after reading those articles by so many talented writers. Horror poetry comes in a wide range of shapes and colors and textures to excite the senses. Read the back issues of the newsletter if you don’t believe me.

DKF: I was completely surprised. Sometimes when you work behind the scenes, you feel taken for granted. I believe I was the third person to manage the membership database. Nancy Etchemendy started it, and handed it to Stephen Dorato. He passed it to me in 1999, and I kept it up until 2010. I received the award in 2006. I couldn’t attend the Stoker Weekend, so I didn’t receive it in person, but I was shocked and delighted that famous writers would choose ME! I’m not sure it paid off in any interesting way, but it did get me into Wikipedia. I still have that hammer in my study as a reminder of my brush with fame.

DKF: HWA is making great strides in changing the opportunities of women in horror, and I hope a question like this will be outmoded soon. I feel that women writing in horror were seen in the past as “writing outside their genre.” HWA’s scholarships and the amazing Seers’ Table column are encouraging a new generation of women as they see the possibilities.

The most important advice I have is: Join the Horror Writers Association! Take advantage of HWA’s scholarship and mentoring opportunities. It’s an investment in your professional career as well as your craft. Understand that “horror” isn’t just one type of writing. I always thought that horror was just slasher or zombie stuff, until I read the incomparable Charles L. Grant and realized I was writing horror. Write the stories your heart tells you, keep writing, and don’t give up. If a publisher won’t accept your work, have your manuscript professionally edited and publish it yourself.

DKF: I have a couple of books in the works. One is a sequel to Second Death; the other is a novel set in Alabama about the conflict between a Baptist pastor and an ancient Sumerian god. My writing has been temporarily on hold as I launch another venture, Reward Your Success, an Etsy store combining journaling with collectible jewelry rewards.

Donna K. Fitch is the independent author of fiction books Second Death, The Source of Lightning, and The Color of Darkness and Other Stories, and the nonfiction books Five Signs It’s Time to Break Up With Your Website, and Your Success Journey Begins Here: A Journal. Donna grew up hearing the sound of rocket testing at Redstone Arsenal and graduated from a high school named for Virgil I. “Gus” Grissom, the astronaut who died in Apollo 1. She also heard tales of the ghost of Sally Carter and the “old Grizzard Mansion” near her home, said to be haunted. This background, when mixed with an early diet of Dr. Seuss, the reference section of the Oak Park Public Library, 1930s mystery stories and the Gothic novels of Victoria Holt, set her to writing her own stories at age 13. Later literary influences spilled into Donna’s writing–Ambrose Bierce, Edgar Allan Poe, H.P. Lovecraft and Tim Powers–to give it more than a tinge of paranormal and the macabre. Her love of research led her to a Master’s in Library Service, and her fascination with HTML led her to switch careers from academic librarian to web designer. She is the founder and jewelry designer of Reward Your Success, an online store combining journaling with collectible jewelry rewards. For fun, she crochets, visits cemeteries–the older the better–and plays roleplaying games. Visit her at www.donnakfitch.com.