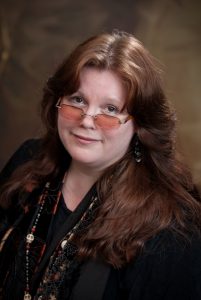 February is Women in Horror Month! The HWA is celebrating by posting interviews with award-winning authors. Following is an interview with Angel Leigh McCoy who won the Silver Hammer award in 2010 for volunteer work.

ALM: I could never express all the ways the HWA has influenced me as a writer. I’m sure there are even ways I’m unaware of. Here’s just a few that come to mind, in no particular order:

ALM: I was quite surprised. You never know you’ve been nominated for a service award until it’s announced, and so I had no early warning. My boss at the time, and predecessor as Webmaster, was Mark Worthen. He was a patient and generous leader who took the time to teach me all I needed to know to step into his shoes when he passed away. He nominated me, and the recognition cemented my loyalty to the job.

HWA members and leaders, (Rocky Wood, Lisa Morton, and many others) have always treated me with respect and professionalism. They’re an easy lot to serve. I love that I can give back to this organization in this way, because I’ve taken so much learning, assistance, and friendship from it.

ALM: I think women have to work harder to earn respect, yes. This is actually a very complex issue. One problem is the age-old boys’ club issue. In any society, the men tend to hang out with the men and women hang out with other women. (Generalizing like a fiend here, but only to make my point.) What often happens, in my experience, is that men tell other men about opportunities and don’t think to tell women because they don’t hang out with them as much. It’s not that they’re consciously shutting women out. It’s just a culture thing. And it does seem to be slowly changing.

The HWA has taken action to break down the divide between men and women by hosting conventions where everyone hangs out together, by encouraging discussion about gender bias, and by providing a location to post calls for submissions on our private forums and in our member newsletter so that everyone can see them and submit. By opening communication across the entire membership, the divide between men and women is closing.

Furthermore, for a long time, there was a stigma about whether a woman could write good Horror. The wonderful talent and warped imaginations of many female Horror writers have proven this is nonsense. There are good, mediocre, and student writers in both genders.

I’m seeing more and more anthologies today that have a nice mix of male and female writers. I take that as a good sign.

ALM: My most recent project was an anthology that I edited called ANOTHER DIMENSION. It is a tribute anthology to Rod Serling and the legacy of shows like “The Twilight Zone” and “Night Gallery.” The stories are a mix of Horror, Dark Fantasy, and Science Fiction from an array of talented writers. It just came out and I’m quite proud of how it turned out. It’s now available at Amazon in paperback and Kindle formats. (https://www.amazon.com/Another-Dimension-Angel-Leigh-McCoy/dp/0983182485/)

In addition to that, I’m part of an indie team of game designers and artists called Games Omniverse (http://www.gamesomniverse.com). I have the joy and honor of being the primary story architect and writer. I’ve been spending a great deal of my time world-building and writing for our long-term puzzle-adventure game project tentatively called “Danika Dire.” It’s an interactive tale of Horror about a young school teacher who abruptly discovers her family’s curse and has her whole world turned upside down as a result.