You can see any of The Seers’ Table posts since inception (March 2016) from the new menu item “Diverse Works” on the top of HWA main page.

Brit Brinson is a twenty-something aspiring author of young adult literature from Ohio. She is a graduate of the Unsinkable Albany State University, where she earned a bachelor’s degree in Psychology. Brit started writing as soon as she could hold a pencil and hasn’t stopped since. She lives for all things horror, paranormal, and sci-fi and may even be a Trekkie (Live long and prosper, y’all). She enjoys doing nerd stuff with her friends and fawning over Chris Evans. Her first novel, Dia of the Dead, was published by Big Moon Press. We look forward to what Brit is writing next! 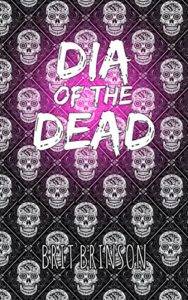 Recommended reading from: Dia of the Dead. “Sixteen-year-old Dia Summers has experienced her fair share of paranormal drama as the star of cult hit TV show Dia of the Dead. Werewolves, vampires, and ghosts were a piece of cake compared to the drama off set. At the eighteenth birthday party for BB Bixby, the daughter of The Bixby Network’s founder, Dia experiences a series of social disasters, including a chance encounter with the off-limits boy of her dreams, a run-in with some old frenemies, and a brush with young Hollywood’s dark underbelly. Before the night is over, Dia soon discovers that the possible cancellation of her show isn’t her biggest worry.

Protecting Romero High from all things supernaturally spooky as Dia Muerto was a tough gig, but it’s nothing compared to protecting the ones she loves from real, live—well, formerly alive—zombies. Unlike the zombies that shambled around on set, the real deal don’t follow a script. Armed with what they can find around Bixby Studios, Dia and her friends band together to find out why everyone they know has begun popping up as gray-skinned, black-eyed, limb-nomming zombies. With the virus spreading, time is running out before Dia is swept up in Hollywood’s latest trend.”

Find her on Twitter @britbrinson or find her at britbrinson.com. 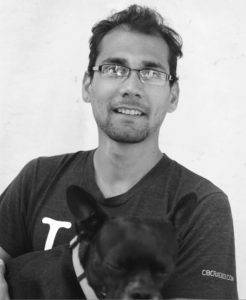 Indrapramit Das (aka Indra Das) is a writer and editor from Kolkata, India. His fiction has appeared in such publications as Clarkesworld Magazine, Asimov’s SF Magazine, Lightspeed Magazine, Strange Horizons, and Tor.com, and has also been widely anthologized. He is a Shirley Jackson Award nominee, an Octavia E. Butler scholar, and a grateful graduate of Clarion West 2012. He completed his M.F.A. at the University of British Columbia (class of ’11) in Vancouver where he wore many hats, including dog hotel night shift attendant, TV background performer, minor film critic, occasional illustrator, environmental news writer, pretend-patient for med school students, and video game tester. He never wore any actual hats, except a toque during winter. He divides his time between India (where he has worked as consulting editor for publisher Juggernaut Books) and North America, when possible.

Indra’s debut novel, The Devourers, was the winner of the 2017 Lambda Literary Award for Best LGBQT SF/F/Horror. The novel was also placed on the 2017 Honor List for the James Tiptree, Jr. Award, and shortlisted for the Crawford Award, the Shakti Bhatt First Book Prize, and the Tata Live! Literature First Book Award. The Devourers is available in South Asia and North America from Penguin India and Del Rey (Penguin Random House), respectively. 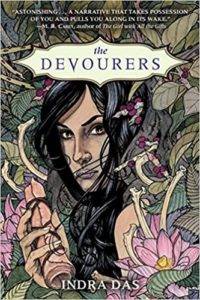 Recommended reading: The Devourers. “On a cool evening in Kolkata, India, beneath a full moon, as the whirling rhythms of traveling musicians fill the night, college professor Alok encounters a mysterious stranger with a bizarre confession and an extraordinary story. Tantalized by the man’s unfinished tale, Alok will do anything to hear its completion. So Alok agrees, at the stranger’s behest, to transcribe a collection of battered notebooks, weathered parchments, and once-living skins.

From these documents spills the chronicle of a race of people at once more than human yet kin to beasts, ruled by instincts and desires blood-deep and ages-old. The tale features a rough wanderer in seventeenth-century Mughal India, who finds himself irrevocably drawn to a defiant woman named Cyrah—and destined to be torn asunder by two clashing worlds. With every passing chapter of beauty and brutality, Alok’s interest in the stranger grows and evolves into something darker and more urgent.”

Shifting dreamlike between present and past with intoxicating language, visceral action, compelling characters, and stark emotion, The Devourers offers a reading experience quite unlike any other novel.

He can be found on Twitter @indrapramitdas and at http://www.indradas.com. 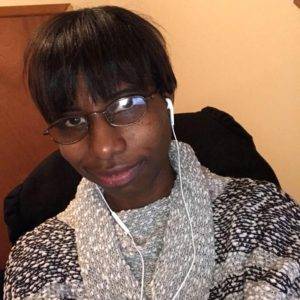 Yawatta Hosby resides in the eastern panhandle of West Virginia. Hosby enjoys connecting with other writers through blogging. With a desire to escape everyday life, Hosby creates short stories, novellas, and novels, always having a fascination with psychology and a focus on the inner struggles within characters. Hosby is an avid reader within these favorite genres: mystery, suspense, horror, and women’s fiction.

Hosby’s short stories have been featured in The Write Place At the Write Time online journal (2013), When the Lights Go Out anthology (2015), and the Don’t Open the Door anthology (2019). Her newest work is a two-book box set that includes One By One and Six Plus One, both horror. 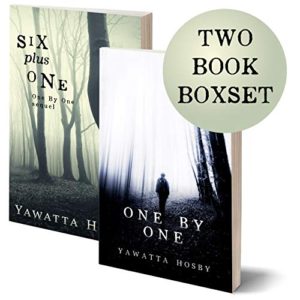 Recommended reading from: One By One. “A bookmark—photo of him, Rae, their mom and dad standing on the wraparound porch at the cabin—surfaced. A forest was nestled in the valley in the background. Kenan took a deep breath and caressed it with his finger. He remembered that day as if it were yesterday. They had just finished swimming at the lake; his dad’s brother and cousins were on their way home before snapping the photo.

Two hours after the photo was taken …

Kenan shook his head, attempting to erase his memory. He put the photo back where he found it and set the book on the nightstand.

If he had his way, nothing tragic would have happened during their teen years. Kenan and his sister wouldn’t have lost their parents.”

If you want to talk about books, friend Hosby on Goodreads. If you want notifications of new releases, follow her on Bookbub, Prolific Works, and/or subscribe to Hosby’s newsletter. 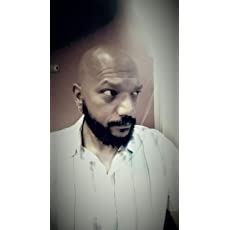 Errick Nunnally is a writer from Boston, a former member of the Marine Corps, and a natural storyteller. A man of many talents, Nunnally can create art, kick your ass in Thai kickboxing, and scare the crap out of you with his writing. An all-around winner! His first novel, Blood for the Sun, was published by Spencer Hill Press in 2014 and brought us into his world full of scary things. What I really loved about this story is that the main character is a werewolf and I have been dying for a really good werewolf adventure. This fits the bill. What is even more amazing is that the werewolf is a person of color, which brings a whole new aspect to a beloved genre. Add in some vampires, magic, and the inevitable struggle for humanity to round out one of the best books I’ve read all year.

During these turbulent times in our country, many people are realizing that there are many voices that oftentimes are not heard. Allies have asked how they can support the cause, and although financial support is always helpful, sometimes just listening to those voices can help as well. Nunnally shows us through this book that even as a fearful lycanthrope, the protagonist is still subject to racism because of his ethnicity.

Blood for the Sun was republished this February by Twisted Publishing. The best part is that author Michelle Lane contributed the foreword, in which she describes the greatness of this book far better than I can! The sequel, All the Dead Men, comes out this month. Don’t miss your second chance to fall into Errick Nunnally’s lycanthropic world of murder, mayhem, and justice. Enjoy! 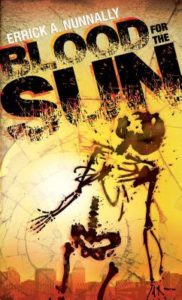 Recommended reading from: Blood for the Sun: An Alexander Smith Novel. “From the scent spilling out of the housing fortress, I could get a pretty clear idea where the corpse lay, but it paid not to seem utterly inhuman when out and about. Roberts believed I was just an odd character with a macabre background, and I intended to keep it that way.

Pepperman said, “Okay, seriously? That ain’t gonna work for me. This wasn’t a good idea to begin with.”

“This is bullshit, it’s unacceptable.” Then to me he said, “I wanna see your ID. Now.”

I glanced at Roberts. He only clenched his jaw, eyes on his partner. Pepperman had a right to be indignant—it was his career that might be jeopardized by my unauthorized presence—so I didn’t mind doing it the hard way.

“Save that cop shit for someone you’ve got power over.” I squared on Pepperman, hands loose at my sides, my eyes looking through to the back of his head. “I’m not here for you; I’m here for the dead kid upstairs. You want to get to the bottom of her murder faster? I’m here for that. You want to try to get me under your thumb? You better try something more than what you pull on these young folks around here.”

Pepperman started to move on me, but Roberts stepped in. “This is my call, Detective. Let it go. This is my heat.”

The junior partner shook his head and threw his hands up. “Yeah, okay, fuck it.”

Roberts knitted his brow and led the way. At the same time, Pepperman sniffed his fingers and looked away. I followed Roberts into the building while Pepperman took up the rear. Was it a mistake to snub him like that? Probably. Did I care? Not at all. There were more important matters at hand and not much time. I didn’t need any more acquaintances anyway.”