Lamar Giles is the author of a wide range of books for young readers, as well as a founding member of We Need Diverse Books, which advocates for essential changes in the publishing industry to produce and promote literature that reflects and honors the lives of all young people.

He is a two-time Edgar Award finalist in the YA category, for his debut YA thriller Fake ID (HarperCollins, 2014), and his second YA thriller, Endangered (HarperCollins, 2015). His third and fourth YA thrillers, Overturned (Scholastic, 2017) and Spin (Scholastic, 2019), received glowing New York Times reviews, as did his middle-grade debut The Last Last-Day-of-Summer (Versify, 2019), which was also named to multiple Best of 2019 lists, including Time Magazine, Kirkus, Booklist, NPR, and Amazon.

Lamar’s other novels include Not So Pure And Simple (HarperTeen, 2020), his first contemporary coming-of-age story, and The Last Mirror on the Left (Versify, 2020) and The Last Chance for Logan County (Versify, 2021), sequels to The Last Last-Day-of-Summer in his Legendary Alston Boys Adventures fantasy series. Lamar is also the editor of the We Need Diverse Books YA short story anthology Fresh Ink (Random House, 2018), and a contributor to numerous YA and middle-grade anthologies, including the #1 New York Times bestseller Black Boy Joy (Delacorte, 2021), and His Hideous Heart: 13 of Edgar Allan Poe’s Most Unsettling Tales Reimagined (Flatiron Books, 2019). He has also published several short stories for adults.

His most recent novel is The Getaway (Scholastic, 2022), a riveting YA horror thriller about a group of Black teens trapped in an apocalyptic theme park that Publisher’s Weekly describes as a “harrowing dystopian novel [that] combines an exploration of capitalistic greed and systemic racism and oppression with gripping psychological horror, resulting in a read that is guaranteed to terrify.” There was a moment of stillness among the twenty or so Trustee kids. The phantom sound of those broken sticks clattering across the floor echoed. Then, true to form, Paige Radford, who still looked pristine in teal leggings and a thin pink sweater, said, “Anyone lays a finger on us and my daddy’s going to have you hanging from the Ferris Reel.”

I don’t know what she was thinking. Maybe she’d seen those prison movies that said you had to look tough going into lockup. Given more time, maybe her, or one of the other Trustee kids, would’ve picked a fight with the biggest among us because that was also prison-movie advice. This wasn’t a prison movie.

Morgan limped forward, picked up one of the sticks, then shuffled to Paige while whipping the makeshift club at her head. There was a crack, like an eggshell on the side of a mixing bowl, and Paige collapsed in a pile, the fingers on her right hand spasming.

The other Trustee kids—except for Chelle—seemed horrified, though they didn’t help the mean girl. Instead, some resorted to begging, while a few others rushed the gate, screaming for help that wasn’t coming …”

Find out more about Lamar at: https://www.lamargiles.com and Twitter: @LRGiles

Joe Koch writes literary horror and surrealist trash. A Shirley Jackson Award finalist, Joe is the author of The Wingspan of Severed Hands, The Couvade, and Convulsive. Their short fiction appears in publications such as Vastarien, Southwest Review, Pseudopod, Children of the New Flesh, and The Queer Book of Saints. He’s been a flash fiction judge for Cemetery Gates Media as well as co-editor of the art horror anthology Stories of the Eye from Weirdpunk Books. Formerly published as Joanna Koch. He/they. 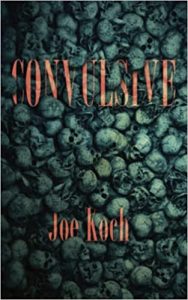 Two officers stand on the threshold. One shines a flashlight inside and says, “Excuse me, ma’am. Is everything alright here?”

The officers exchange a look and step inside. Behind them, the deserted street has come to life, not with roaming ghosts but with peering neighbors, open storm doors and illuminated porch lights. The black witch effigy dolls are lit from behind, casting shadows. They sway on their brooms, titillating lurid whispers up and down the block.

The girls cling to Blaine’s legs like baby marsupials cowering from a threat. Blaine gestures at the creatures with open palms. “Their mother left them here. Or babysitter. This is so terrible, the poor things. Please, can you get them home?”

“Have you called their mother?”

“I don’t know. Everyone knows her. Ask one of those people.” Blaine points over the crush of the girls at the peeping faces outside. The officer with the flashlight lowers it, and then turns and shuts the front door. The last thing Blaine sees outside is the neighbor couple in matching bathrobes pulling their witch doll down from the rafters.

The second officer buddies up next to Blaine and the girls while Flashlight scans the scene. The girls press into Blaine. Devil teeth snag holes in Blaine’s sweatpants. Blood drips from the beak and dampens her thighs. Flabby horns writhe on her like hungry worms.

Blaine pushes back at the girls. Her fingers sink into the horns like chewed bubblegum. The bloody beak nips at her wrist. “Jesus,” she says, “Get them off me.”

Buddy admonishes, “You shouldn’t talk that way in front of the children.”

Erika T. Wurth’s novel White Horse is a New York Times editor’s pick, a GOOD MORNING AMERICA buzz pick, and an Indie Next, Target book of the Month, and BOTM Pick. She is both a Kenyon and Sewanee fellow, has published in The Kenyon Review, Buzzfeed, and The Writer’s Chronicle, and is a narrative artist for the Meow Wolf Denver installation. She is an urban Native of Apache/Chickasaw/Cherokee descent. She is represented by Rebecca Friedman for books, and Dana Spector for film. She lives in Denver with her partner, step-kids, and two incredibly fluffy dogs. In my dream, I am my mother.

I’m laughing, walking around with my friends, candy apples in our hands. I bite into the apple, my teeth penetrating the candy to the fruit, sweet and crisp, the juice running down my hand.

We’re walking past the kiddie rides, the shrieks of small children echoing throughout, the sun setting over Lakeside. All of the colors so much brighter than in my youth.

There is a snap in perspective, and we’re closer to our goal, further along the dusty path. Another snap, and we’re standing at the foot of a giant rollercoaster. Michael, my mother’s father, is at the foot of the coaster, pulling the gears. Another, and we’re on it, laughing as it pulls away.

My mother screams in pleasure as it turns, twists, and I watch, anxious for some reason, the smell of rotting meat beginning to pervade. My mother’s screams change to shrieks of outright terror as I watch the man behind her, whose face was at first a blur, turn into the Lofa. It begins to tear into her, its long hair caressing her like a lover as it pulls wet, meaty chunks up and out of her neck, her shoulder, her dark hair coated in blood and viscera.

I wake up from the dream, my mother above my bed.

Her eyes turn dead white, and she screams.

I scream with her.

Her short story collection, The Rock Eaters, was published by Penguin Books in March 2021, and listed as one of NPR.org and the New York Public Library’s best books of 2021. Over forty short stories appear in journals such as Tor.com, The Georgia Review, The Sun, Threepenny Review, Epoch, Kenyon Review online, Pleiades, Prairie Schooner, and elsewhere. Her stories have won a Nelson Algren Award from the Chicago Tribune, an O. Henry Prize, a Pushcart Prize; inclusion in The Best American Science Fiction and Fantasy, Best Small Fiction, and Best Microfiction anthologies, two Vermont Studio Center Fellowships, and other awards.

After a BA in Computer Science from Wellesley College, she worked as an IT auditor for IBM. She graduated with her MFA in fiction from Florida State University, where she held a Kingsbury Fellowship and was Fiction Editor of The Southeast Review. In 2014, she received a Fulbright Fellowship to the Dominican Republic to write a novel about the 1965 Guerra de Abril. She received her Ph.D. in fiction from the University of Cincinnati, where she taught screenwriting, fiction, and science fiction & fantasy writing.

Currently, she teaches fiction at the University of Houston. 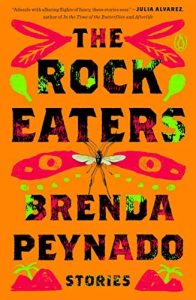 Recommended Reading: “The Stones of Sorrow” from The Rock Eaters:

Jackson often flashed the pockmark scar on his arm, but I didn’t know what sorrow was behind it. He said he was too young to remember. The scars and the stones—they happened to nearly everyone in the town.

When the townspeople encountered their first great grief—not something small like a broken leg or a bickering between friends, but real grief, the kind that brought you to your knees—the first time they felt that, their stone of sorrow would form. Sometimes it happened when they were still children: a father who left, a great divorce, a twin who died. Sometimes it happened when they were teens. A few were lucky enough to escape it until they were older, or had somehow steeled themselves against it.

But whenever they felt that sorrow, that’s when the rock started forming—in their fists, in their praying palms, in their throats. At first it was as small as a grain of sand they couldn’t wash away, irritating. Then it would roll into a pebble over a matter of minutes or years. Sometimes it only grew as big as a skipping stone, sometimes as big as a boulder. Everyone’s sorrow took its own course and speed, and no amount of forced catharsis or letting go could make the rock go away when you wanted. In its own time the stone would dislodge, but only when it could fall on the shore of the lake. You could see the townspeople at the shore every dawn and sunset, orange light on their faces, hoping their rocks would dislodge, would lie down with their comrades of sorrow, generations of them along the waterline.