Beatrice Winifred Iker (eye-kerr) grew up in the picturesque (and undoubtedly haunted) valley of the Great Smoky Mountains. As a child, they spent an incalculable time in their grandmother’s living room staring at the unending ridges and peaks; eventually, they decided to write about this bewitching place.

A great passion of theirs is genealogy and ancestry. As a result, much of their writing lives in the southern gothic genre, where they grapple with the American South’s history, which is both terrifying and entrancing. Their stories feature characters and themes in the Black, neurodiverse, and queer communities.

Mentorship is deeply important to Beatrice. They are a co-host on the Afronauts Podcast with fellow Black speculative fiction authors (aka their besties). They are a Mentor-in-Residence/Mentor in the Write Team, Queery Fest, and Write Hive Mentorship Programs.

A member of the HWA, they are proud to be a 2022 Voodoonauts Fellow. Their work appears/is forthcoming in issues of FIYAH Magazine of Black Speculative Fiction, Fantasy Magazine, Nightmare Magazine, and others. Additionally, they are a contributor to the Death in the Mouth horror anthology (10/01/2022). 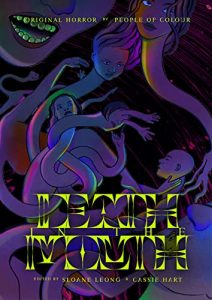 Recommended Reading: from their story, “They’ll Keep You Gestated” from Death in the Mouth anthology.

It should be illegal for hallways to be this bright. The penalty ought to be death, and I should be the executioner, wrapping my fingers ’round the throats of the convicted.

In the light, my plump fingers glisten with my saliva. I watch as they sparkle, singing with the fluorescents. When the wetness on my skin dries in the cool air, I swirl my entire hand in my mouth and growl in happiness as I pull it out and see the shimmer again.

There are wobbly teeth inside of me, but I’ll get to those later.

My other hand has no fingers at all. It’s a black microphone with no off switch. The smooth cord is embedded in my skin, trailing down my body and unhurried zigzags before touching the cold linoleum floor.

I’ve never seen linoleum flooring before, and it’s a shame I’m trapped here, in this desolate hallway, with fucking linoleum flooring. It doesn’t help that the odor of bleach howls in the silence, all but assaulting me.

“Excuse me,” I say into the microphone. I hear a gasp and look to my right. There’s a fat desktop computer on a card table. The screen is static, but I’m certain the noise came from here. “Excuse me,” I say again, and the gasp sounds out of the speakers again.

Ridley Harker is a gay, transgender author and editor from St. Louis who delights in all things gay and spooky. Influenced by Billy Martin (Poppy Z. Brite), Clive Barker, and Gemma Files, his favorite books are those with enemies to lovers, great villains, and queer main characters. Horror-romance is his favorite genre. He lives in the Middle of Nowhere with his two dogs, a grumpy old snake, and a host of pet tarantulas. Ridley is currently working on his MFA. 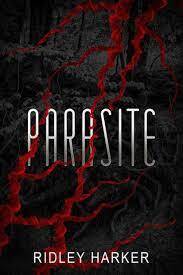 Recommended Reading: From his novel, Parasite.

But he was afraid of this one.

It was the eyes. He had seen eyes like that one before, years ago. Back when he had spent much of his days drunk. Once, while Kendrick cleaned their catch, Jamison had gone too far and drunk too much. His legs had betrayed him, and he had tumbled over the side. He remembered tasting blood. A tangy mix of iron and salt that burned in his lungs when he tried to inhale. His eyes had stung. He had floundered in the icy water. He, a man who had learned to swim before he could walk, was drowning.

Then the moment of panic was gone, and instinct had set in. Jamison’s powerful legs had propelled him upward, his arms outstretched toward the boat. He had nearly reached it before the shadow was beneath him. It came at him like a torpedo, almost too fast for his gin-addled brain to comprehend. A massive, prehistoric monster armed with muscled jaws and sandpaper skin. The soulless black pits of its eyes rolled back in its head, and its gaping maw expanded to reveal rows upon row of serrated teeth.

As an educator, she collaborates with a variety of organizations to build multicultural learning environments. Through the use of Speculative Fiction and creative disciplines such as music, film, and performance, Ms. Nyoka designs and implements family friendly curriculum and programming to address literacy, creative problem-solving, and the importance of youth advocacy. She is a published author, a regular contributor to The Last Girls Club, and a member of the advisory committee at The Door.

She holds a BFA in Music Theater from the University of the Arts, and an MFA for Performance & Interactive Media Arts from Brooklyn College.

Recommended Reading: From her short story “Luz” featured in Midnight and Indigo.

I spread a ring of ash around myself and the tombstone, put down my mother’s necklace, and a lock of baby’s hair I cut off one of the toddlers in the daycare I worked at. This last item had cost me the job, but I was already tired of the diapers, the low pay, and the total lack of respect for my time. Nothing has felt the same since my mother died and I know that if this doesn’t work people will just say I’ve gone crazy from grief. They wouldn’t be wrong.

I close my eyes to concentrate fully on my desires and how far I’m willing to go for them. Magic isn’t about words, I discover, but about intention and having the will to see it through. I take a deep breath and let everything go quiet in my mind. Then, with no fanfare, I bring the dove’s blood to my lips and throw it back. It tastes like liquid copper and my torso goes hot instantly. As I swallow the last drop, the circle of ash ignites and I can feel the warmth on my cheeks from the small ring of fire that surrounds me. 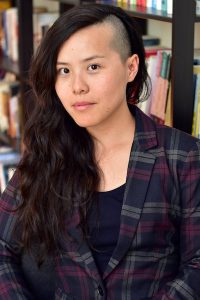 Kim Fu is the author of two novels, a collection of poetry, and most recently, the story collection Lesser Known Monsters of the 21st Century, a finalist for the 2022 Scotiabank Giller Prize and the 2023 Pacific Northwest Booksellers Award.

Fu’s first novel, For Today I Am a Boy, won the Edmund White Award for Debut Fiction and was a finalist for the PEN/Hemingway Award, as well as a New York Times Book Review Editors’ Choice. Her second novel, The Lost Girls of Camp Forevermore, was a finalist for the Washington State Book Awards and the OLA Evergreen Award. Fu’s poetry collection How Festive the Ambulance includes a National Magazine Awards Silver Medal winner and a Best Canadian Poetry selection. Fu’s writing has appeared in Granta, the Atlantic, the New York Times, BOMB, Hazlitt, and The TLS. 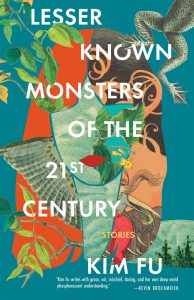 Marth opened the utensil drawer in the kitchen and a beetle scurried out. She put her hands in her coat pockets and felt the crisp, dry dead, or the spiny protrusions on their legs as they scrambled up her fingers. When she went to shower, she noticed four beetles drowned in the thin skin of water that always remained over the tub drain. She turned on the shower to wash them away, and the beetles that had been standing upside down on the showerhead were blasted off. It took her a while to realize that the curtains, being so dark and similar in color, hosted clusters of beetles in their folds. She tried vacuuming them out with the ancient, bagged vacuum she’d found in the house, but it quickly clogged. She went to the hardware store and bought sticky traps, which filled with beetles every night and had to be changed every morning. She went back and stared at aerosols and poisons, all intended for different bugs than these—these were harmless, after all—but they seemed pointless given the magnitude of the problem.