Briana Morgan loves all things literary: from Gatsby to vampires. Using her Bachelors in English, she has been editing manuscripts and writing reviews for a decade, but has also been writing her own stories at the same time. 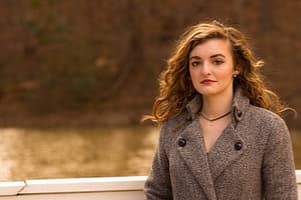 She started her fiction career writing compelling Young Adult stories. Her debut novel, Blood & Water, is especially chilling for its subject matter. The protagonist is a young teenager trying to survive a deadly pandemic and save what’s left of his family. The virus has killed half the population, and he struggles to find a cure. This bit of prescient writing was published in 2015—spooky!

Morgan is also a playwright, having published two plays. A one-act play, Touch, imagines a world where touching other people is not allowed. She explores the powerful sensation of touch, and what happens when you indulge in the forbidden. Heavy topics for YA but exhibited so well I wouldn’t limit this book to just one genre. Her second play, Unboxed, delves into the world of social media. A vlogger finds out just how far he will go to get a million subscribers—and who will be sacrificed in the process. Livingston Girls, another YA book reminiscent of Hogwarts, tells the story of a burgeoning witch, while Reflections brings us into the world of shapeshifters wreaking havoc in our world.

Her latest novel out this past October for your reading pleasure is Mouth Full of Ashes. Morgan has stated the book is a love letter to our favorite vampire movie THE LOST BOYS, and the story is similar. After a tragedy, a mother moves her two children to a new town to start anew. However, Briana’s story takes a few wild turns that makes this story its own adventure and not just a literary remake of a beloved film. In this version, the protagonist is Callie, the older sibling, who feels a deep responsibility to keep her younger brother safe. The twist is that both siblings end up infected with vampirism, and the novella details their struggle to save each other, their family, and the town against a bloodthirsty menace. Briana writes with a flair for foreshadowing while not giving away the story and still engaging the reader. Yes, going off into the dark with Bad Boys can only lead to bad things! And yet I found myself eagerly turning the page to see what kind of evil shenanigans ensue. The book is fast-paced, highly entertaining, and one of the best boardwalk monster stories I’ve read. Get to know the work of Briana Morgan now. I guarantee you’ll be hearing a lot more from her in the future.

Callie had heard of vampires not turning fully until they had an initiation. In The Lost Boys, anyone who’d started turning could stop the process if they didn’t drink human blood and if they killed the vampire who sired them.

“You’re not in your twenties, either,” said Callie.

Maeve and Tahlia looked at each other. A slow smile spread across Tahlia’s face. “No. We were once.”

“Now, forever.” Maeve winked. “We were lucky to turn when we did.”

“We’re in our late twenties,” Tahlia said. “Been vamps since the Eighties. We’re not full-fledged, either. It’s a pain in the ass.”

“Like being vegetarian or vegan,” Maeve said. “You know it’s the right thing, but damn if that meat doesn’t smell delicious.”

Callie thought back to the alley, Elijah’s mouth on her neck, teeth dragging over her flesh. A lump rose in her throat and she swallowed. He’d wanted to bite her then. He could’ve killed her. But he hadn’t.

Briana’s work can be found where books are sold. You can find her online at https://brianamorganbooks.com/ and https://www.facebook.com/BrianaMorganBooks/.

Poppy Z. Brite (Billy Martin) initially achieved notoriety in the gothic horror genre of literature in the early 1990s by publishing a string of successful novels and short story collections. His later work moved into the genre of dark comedy, with many stories set in the New Orleans restaurant world. Martin’s novels are typically standalone books but may feature recurring characters from previous novels and short stories. Much of his work features openly bisexual and gay characters. 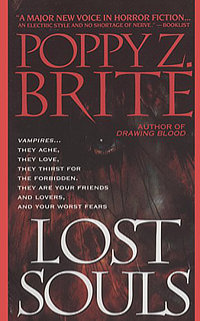 Tonight, as usual, she slipped in at nine thirty and looked around for the friends who were never there. The wind blew the French Quarter in behind her, the night air rippling warm down Chartres Street as it slipped away toward the river, smelling of spice and fried oysters and whiskey and the dust of ancient bones stolen and violated. When the girl saw Christian standing alone behind the bar, narrow, white, and immaculate with his black hair glittering on his shoulders, she came in and hopped onto a bar stool—she had to boost herself—and said, as she did most nights, “Can I have a screwdriver?”

“Just how old are you, love?” Christian asked, as he did most nights.

“Twenty.” She was lying by at least four years but her voice was so soft that he had to listen with his whole cupped ear to hear it, and her arms on the bar were thin and downed with fine blonde hairs; the big smudges of dark makeup like bruises around her eyes, the ratty bangs and the little sandaled feet with their toenails painted orange only made her more childlike. He mixed the drink weak and put two cherries in it. She fished the cherries out with her fingers and ate them one by one, sucking them like candy, before she started sipping her drink.

“Who are you waiting for?” Christian asked her the first time she came in.

“The vampires,” she told him.

She was always alone, even on the last night of Mardi Gras. The black silk dress left her throat and arms bare. Before, she had smoked Marlboro Lights, Christian told her that only virgins were known to smoke those, and she blushed and came in the next night with a pack of Camels. She said her name was Jessy, and Christian only smiled at her joke about the vampires; he didn’t know how much she knew. But she had pretty ways and a sweet shy smile, and she was a tiny brightness in every ashen empty night.

He certainly wasn’t going to bite her.

Luis Alberto Urrea is multi-genre award-winning author and Pulitzer Prize finalist. Born in Tijuana to a Mexican father and an American mother, Urrea’s writing focuses on his two cultures and the issues and horror around the Mexico-United States border. In 2017, Urrea won an American Academy of Arts and Letters Fiction award for his collection of short stories, The Water Museum. The Water Museum was also a finalist for the 2016 PEN-Faulkner Award and was named a best book of the year by The Washington Post and Kirkus Reviews. The Devil’s Highway won the Lannan Literary Award and was a finalist for the Pulitzer Prize and the Pacific Rim Kiriyama Prize. Both The Hummingbird’s Daughter and The Devil’s Highway won the Kiriyama Prize in fiction. 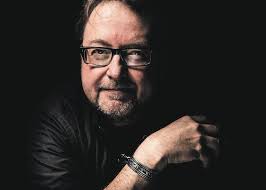 His book, The House of Broken Angels, published in 2018 by Little, Brown and Company, is the story of an American family from Mexico. The book explores what it means to be an American. The patriarch of the family is dying of cancer and brings together the family for a last birthday celebration. A few days before the party, grandmother dies. What results is a huge family get-together where stories and tribulations are shared. The book is a hail to the power of family—and discusses how love and connection exist beyond borders and death.

Excerpt, The House of Broken Angels:

Big Angel was late to his own mother’s funeral.

He tossed in his bed, the sheets catching his feet in a tangle. Sweat tickled his sides as he realized what was happening. The sun was up—it was bright through his eyelids. The burning pink world. Everybody else would be there before him. No. Not this. Not today. He struggled to rise.

Mexicans don’t make these kinds of mistakes, he told himself.

Every morning since his diagnosis, he had the same thought. They were his alarm clock. How could a man out of time repair all that was broken? And on this morning, as he was awakening to these worries, cursed by the light, cursed in every way by the time, betrayed by his exhausted body while his mind raged, he was startled to find his father’s ghost sitting beside him on the bed.

The old man was smoking one of his Pall Malls. “That’s a lot of weight to carry around,” his father said, “Time to wake up and let it go.”

He was speaking English. His accent had gotten smoother, though he still pronounced “weight” as gweitt.

The old man became smoke and rose in curls to vanish against the ceiling.

Melissa R. Mendelson is a horror, dystopian, and science-fiction author and poet. Melissa’s short stories have been published by Sirens Call Publications, Dark Helix Press, Transmundane Press, and featured on Tall Tale TV, and she was recently a finalist in the Summer 2021 Owl Canyon Press Hackathon. 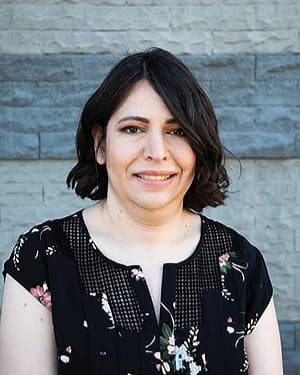 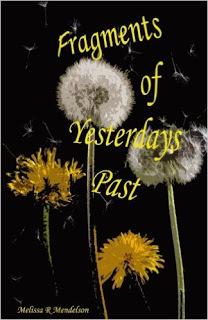 I was a dentist, and she was the astronomer. What a pair. We were so wrong for each other in so many ways, but we hardly fought. We laughed instead, even through the worst times, even when I got hooked on Oxycodone. I thought I was going to lose her. Maybe, I should have. Maybe, if she wasn’t heading home that night to surprise me with dinner, she wouldn’t have been killed in a car accident by a drunk driver. It’s my fault that she’s dead. At least, it feels like it. I stared at the dark, empty house. It was too fucking big. Maybe, I should just sell it, but then I would have nothing left of her.

I needed a glass of wine. A large glass of red wine, but even with that in my system, I wasn’t tired. Instead, I found myself walking to the observatory, her observatory. I haven’t stepped foot inside since that last night with her. My hand shook as I turned on the lights. I inhaled half the wine.

“Come on. She wouldn’t want you to be like this.” I walked inside and stared at the maps and drawings along the walls. She had found something, something that terrified and amazed her. She had to tell me about it before the news broke, but no news ever broke about it. Whatever she had discovered was lost when she died.

Maybe, coming in here was a mistake. The sound of the flatline was louder.

You can find out more about Melissa at http://www.melissamendelson.com or visit her author page on Amazon.com or on Twitter at @MelissaMendelson.