You can see any of The Seers’ Table posts since inception (March 2016) by going to the HWA main page and selecting the menu item “Our Blogs / Diverse Works”.

Tori Eldridge is the national bestselling author of the newly-released dark fiction, Dance Among the Flames, and the Lily Wong mystery thriller series—The Ninja Daughter, The Ninja’s Blade, and The Ninja Betrayed—nominated for the Anthony, Lefty, and Macavity Awards and winner of the 2021 Crimson Scribe Award for Best Book of the Year. Her shorter works appear in the inaugural reboot of Weird Tales Magazine and horror, dystopian, and other literary anthologies, including her short story, “Missing on Kaua‘i,” in the 2022 Mystery Writers of America anthology, Crime Hits Home. Her horror screenplay, THE GIFT, earned a semi-finalist spot for the Academy Nicholl Fellowship.

A blow to the face smacked away the last of her resolve. Not only would she never be free, she wouldn’t even survive. Instead of slithering to the ground, robbed and stomped to death, a powerful strength entered Serafina and turned her despair into rage.

Serafina’s sight honed in on her attacker like a hunter to its prey as unfamiliar thoughts entered her mind and spoke from her mouth of their own accord. “You dare to touch me, you insignificant ant?”

She grabbed the man by the throat and lifted him onto his toes. “No one touches the Queen of the Wind and Rain. No one defiles Yansã and lives.”

She hurled the man across the alley and screamed in fury when he only bounced against the stone. 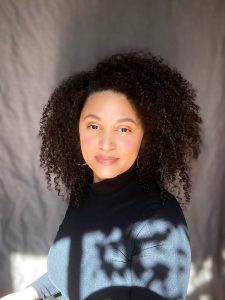 She is a CILIP Carnegie Medal Nominee, a two-time CYBILS Award nominee, a winner of the 2021-2022 Whippoorwill Award, and the recipient of the 2022 Randall Keenan Award for Black LGBTQ fiction from the Lambda Literary Foundation, for which she was selected “for her work in children’s literature that focuses on LGBTQIA+ youth, in particular Queer Black girls who can be the main characters, the chosen ones, the dragon slayers, the keepers of magic.”

She is also a classically trained vocalist and musical theater enthusiast. When she’s not writing, you can find her watching scary movies and spending time with her family.

The path led to the glade of black bat flowers, which all perked up as I walked through. The trees guarding the iron gate on the opposite side of the meadow leaned away, and the bougainvillea pulled the metal bars open, allowing me to pass through. I stopped as I entered the garden, holding my breath, feeling the ache of what had happened there the same way I felt the sting of toxins when I entered the Poison Garden, only I wasn’t immune to this pain. Mrs. Redmond had tainted this beautiful place, but the garden was already working hard to erase any sign that she had ever been there.

The acacia tree stood like a sentinel guarding the overflowing beds of everyday plants.

Hecate’s Garden had overtaken its wooden walls. Hellebore and velvet petunias climbed the wall closest to the plot. The hellebore’s yellow centers reminded me of watchful, protective eyes.

Calla lilies and dahlias spilled out and covered the patch of earth where my mom had lain unconscious. Her blood was spilled there. I couldn’t see it, but I knew it was there, and I felt an overwhelming rush of gratitude to the flowers who’d hid it from me. Did they know I wouldn’t be able to handle that? That seeing the patch of darkened earth might have been my breaking point?

Find out more about Kalynn at https://www.kalynnbayron.com and Twitter: @KalynnBayron.

Nicola Griffith is a native of Yorkshire, England, where she earned her beer money teaching women’s self-defense, fronting a band, and counseling at a street drugs agency, before discovering writing and moving to the U.S. Her immigration case was a fight and ended up making new law: she was the first openly queer person for whom the State Department declared it to be “in the National Interest” to live and work in this country. This didn’t thrill the more conservative power-brokers, and she ended up on the front page of the Wall Street Journal, where her case was used as an example of the country’s declining moral standards.

In 1993, a diagnosis of multiple sclerosis slowed her down a bit, and she concentrated on writing. Her novels are Ammonite (1993), Slow River (1995), The Blue Place (1998), Stay (2002), Always (2007), Hild (2013), So Lucky (2018), Spear (April 2022), and Menewood (2023). She is the co-editor of the Bending the Landscape series of original short fiction. Her multi-media memoir, And Now We Are Going to Have a Party: Liner Notes to a Writer’s Early Life, is a limited collector’s edition. Her essays, opinion pieces, reviews, and short fiction have appeared in an assortment of academic texts and a variety of journals and media outlets, including the New York Times, Nature, New Scientist, Los Angeles Review of Books, NPR, Electric Lit, Literary Hub, and Out. She’s won the Washington State Book Award (twice), the Otherwise/Tiptree, Nebula, and World Fantasy Awards, the Premio Italia, the Lambda Literary Award (six times), and others.

In 2015 Nicola founded the Literary Prize Data working group whose purpose initially was to assemble data on literary prizes in order to get a picture of how gender bias operates within the trade publishing ecosystem. (The $50,000 Half the World Global Literati Prize was established as a direct result.) In 2016 she began #CripLit, an online community for disabled writers for which, with Alice Wong, she co-hosts an occasional Twitter chat.

Nicola, now a dual U.S./UK citizen, holds a PhD. from Anglia Ruskin University, is married to writer Kelley Eskridge, and lives in Seattle. Most of the time she is happily lost in the seventh century (researching her ongoing series about Hild), emerging occasionally to enjoy a ferocious bout of wheelchair boxing, drink just the right amount of beer, and take enormous delight in everything. 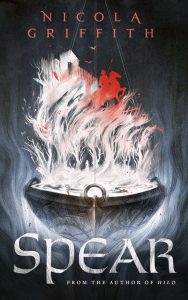 Nicola’s writing is immersive and stirring. Her characters’ closeness with the physicality of living (and fighting), and their wonder in the natural world around them, makes the worlds of Griffiths’ story immersive, stirring, and deeply alive. Her latest novel, Spear, takes us inside an entirely different look at Arthur’s England, where magic and political power wage war for the land itself and where a girl transgresses gender norms with her agility and fighting ability to find herself a knight. Excerpt:

In the wild waste, a girl, growing. A girl at home in the wild, in the leafless thicket of thin grey saplings with moss growing green on one side. In this thicket, the moss side does not face north, but curves in a circle with its back to the world, and, at its centre, where the branches grow most tangled and forbidding, is a hill. In the face of that hill, always hidden from the world, is the dark mouth of a cave where the girl lives with her mother.

As far as the girl can tell, none on two legs but herself and her mother has ever trod here. Her mother will creep from the cave only as far as the gardens at the edge of the thicket, and then only in summer when the leaves are cloak enough to hide the sun-burnished bronze of her heavy-waved hair, when the hard enamel blue of her eyes might be forget me nots; but the girl is at home in the wild.