August contains National Friendship Day; why not make buddies with some new creators! 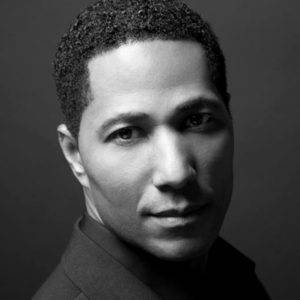 Nzondi (Ace Antonio Hall), born July 4, 1966, is an American urban fantasy and horror writer. He is best known as the creator of Sylva Slasher, a teenage zombie slasher who also raises the dead for police investigations. His nonfiction book, Lord of the Flies: Fitness for Writers, was published by Omnium Gatherum. Nzondi’s latest speculative fiction novel, The Oware Mosaic, is coming September 2019 from Omnium Gatherum. As a participant of the HWA new mental health initiative, he wrote an article (“13 Reasons Horror Should Put on a Happy Face”) about Horror & Urban Fantasy Literature’s Effect on Health Awareness.

“Once again, Nzondi creates a rich and vibrant world crackling with life. He is a brilliant writer, one readers and critics should be watching.” – Pete Nowalk, creator of How To Get Away With Murder. 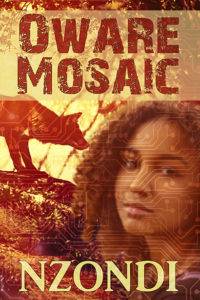 “Nzondi’s ‘Oware Mosaic’ is real Afrofuturism, speculative fiction actually set on the continent itself. This is the future of sf, and the future is looking good.” – Steven Barnes, author of Lion’s Blood.

Recommended work: Oware Mosaic. Decades after a cataclysmic nuclear war, Ghanaian scientists develop technology that stores consciousness onto data orbs called retcons. Seventeen-year-old forensic specialist, Feeni Xo, is an Enhuman (a radiation-enhanced metabolic human) that, similar to a vampire, needs blood for sustenance. Through a game called the House of Oware, Feeni discovers that the virtual construct is actually an augmented reality. She and her human best friend, Sammi, a young female detective, have been mysteriously given specialized neural implants that allow them to hack into government software. The two teenagers race against time in a horrific world of deformed beasts to piece together the puzzles of the digital mosaic. Will they find a way to save sentient beings from total extinction or will they run out of time?

Joanna Parypinski is a writer of dark speculative fiction whose work has appeared in Black Static, Nightmare Magazine, Chizine, Haunted Nights, New Scary Stories to Tell in the Dark, The Beauty of Death Vol. 2, Tales from the Lake Vol. 5, Nighscript IV, Vastarien, and more. Her novel, Dark Carnival, was recently published by Independent Legions. She holds an MFA from Chapman University and is a member of the HWA. She currently lives in the L.A. area and teaches English at Glendale Community College.

Dark Carnival wouldn’t let me go—I couldn’t stop reading this story of ancient evil, a carnival, a runaway mother, and a man who returns to the town of his birth against his better judgement. The supernatural mystery reveals itself in layers, page after page—I loved it!

Though it had been fourteen years since he’d heard it in person, his mother’s long-ago voice rang in his head: That coyote was dead, kiddo. Killed by its own carelessness.

The ghost-voice was right, of course. The coyote had been dead. Killed by Dax’s carelessness, more like, but dead all the same, and what, had it been taken by the roadkill fairies? He became acutely aware of a kind of dread inside him, like the uneasy electricity that fills the air before a storm.

He looked ahead, thinking he might see its mangled corpse limping up the highway, on its way to the incinerators in Bannon, but there was the familiar black billboard that declared in tall white letters, HELL IS REAL.

Or maybe, came his mother’s voice, or a sibilant approximation of it, maybe it was a trickster.

The unsettling red smear ended in a thin, tacky pool of drying blood. A shrub shuddered nearby, and he flinched. 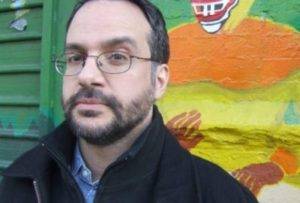 Richie Narvaez (aka R. Narvaez) was born and raised in Williamsburg, Brooklyn. His literary and crime fiction have been published in Mississippi Review, Murdaland, Pilgrimage, Indian Country Noir, Long Island Noir, and Tiny Crimes. His first collection of short stories, Roachkiller and Other Stories, received the 2013 Spinetingler Award for Best Anthology/Short Story Collection and was listed as one of BookRiot‘s 100 Must-Read Works of Noir. His debut novel, Hipster Death Rattle, was published by Down & Out Books in 2019.

Recommended work: Hipster Death Rattle. Hipsters are getting slashed to pieces in the hippest neighborhood in New York City: Williamsburg, Brooklyn. As fear and tension rise in the summer heat, police detectives Petrosino and Hadid eye local gangbangers for the crimes. Meanwhile, slacker reporter Tony Moran and his ex-girlfriend Magaly Fernandez pursue a cold case involving an old woman who mysteriously disappeared a year before. But the closer they all get to the truth, the closer they get to losing their heads. 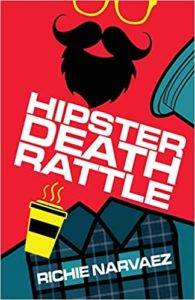 Filled with a broad cast of local characters and told with sardonic wit, this fast-moving, intricately plotted story plays out against a backdrop of rapid gentrification, skyrocketing rents, and class tension, written like only a true native could.

“Richie Narvaez has created something that’s been missing from recent fiction: a vivid, loving look at city living from the street view.” – Sara Paretsky, award-winning author of Shell Game

“Narvaez has some brutal points to make about gentrification … that [give] the text a crackling fission you don’t find in a typical mystery.” – Mystery Tribune

“[Narvaez] has one of the most compelling writing styles I’ve come across in years.” – Lawrence Kelter, author of Back to Brooklyn 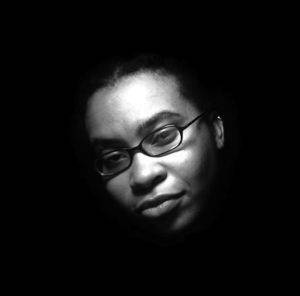 Tenea D. Johnson originally hails from Louisville, Kentucky before trying out other big cities around the U.S. She started writing stories in crayon while making music in her head so creating speculative fiction was a natural progression. Her work can be labeled dark and dystopian, as she uses the world’s cruelty to create atmospheres that exhibit the worst of humanity. Tenea is not without hope, however, and threads of that hope wind through each story, giving the reader a lifeline to a possible happy ending. What’s more likely is not the traditional happy ending, but more of a twisted kind of justice that satisfies as it horrifies.

She has published short stories, several speculative fiction novels, and musical compositions that stir the soul. Tenea’s debut novel, Smokehouse, won the 2011 Carl Brandon Parallax award, and the novel, R/evolution, earned honors. Her current offering is a follow-up to R/evolution called Evolution. The dystopian model continues: how will humans affect evolution with the advent of genetic reparations. She also has a new collection coming out from Rosarium titled Broken Fevers, which she says runs the gamut from “inflections of humor to horror.” 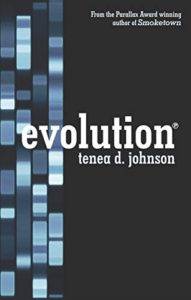 Recommended Reading: Evolution. Evolution was published by the author’s own imprint Counterpoise Records: Nostalgia came with being the oldest young man in the world; doing it in secret made it mournful. William aged so slowly that it hid his years.

Like the other recipients of genetic reparations, you couldn’t tell how he differed until people started to die. Unlike the other Carter Kids, William didn’t just survive toxic environments and infections longer. He survived everything, including them. Only Carter Kid descendants could be found now. So ghosts filled William’s world. Even in a place like this, the ancestors of the present lurked, behind every tree, down to the root of things.

First, he could see fear in the eyes of a White man who walked around the corner and saw him, though being a Black man here was supposed to be William’s danger. With strength and size that rivaled the most expensive biogenetic adaptations, William knew this fear well. He had seen it every day since he’d been a boy nearly no one thought a child.

The people here wouldn’t believe him, but he hadn’t come to pick a fight. William drew his sidearm in a flash of movement, squeezed the trigger quicker than the man could alert anyone. The tranq entered his upper thigh. William placed it near an artery but far enough from his heart to do any lasting damage. William quietly covered the distance between them and pulled his limp body into a shadow, then stepped out of it.

William had a hunch. And as much as he preferred tactics, he’d spent the time since his letter’s publication learning their limits.

You can reach Tenea Johnson at http://www.teneadjohnson.com.