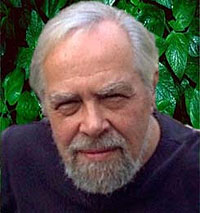 Bruce Boston is the recipient of the 2010 Stoker Award for Superior Achievement in a Poetry Collection. He is the author of forty-eight books and chapbooks, including the novels The Guardener’s Tale and Stained Glass Rain. His poetry has received a record seven Rhysling Awards, a record six Asimov’s Readers Awards, a record four Bram Stoker Awards for poetry collection, along with the first Grandmaster Award of the Science Fiction Poetry Association. His fiction has received a Pushcart Prize and the Best of Soft SF Award.

Boston’s work has appeared in hundreds of publications, most visibly in Asimov’s SF Magazine, Amazing Stories, Weird Tales, Strange Horizons, Realms of Fantasy, Year’s Best Fantasy and Horror, and The Nebula Awards Showcase. He lives in Ocala, Florida, once known as the City of Trees, with his wife, writer-artist Marge Simon. For more information, visit his website at www.bruceboston.com.

How would you describe Dark Matters?
A trade paperback of 96 pages published by Bad Moon Books containing 49 dark poems and prose poems along with some wonderfully spooky illustrations by Italian artist Daniele Serra.

Tell us about what inspired you to write Dark Matters.
The poems collected in Dark Matters cover a span of more than twenty years. To speak to the individual inspiration involved with each would no doubt stretch my memory irreparably and bore you intolerably. But I can speak to the inspiration for “Dark Rains Here and There,” the sample poem included here.

I’ve always found day after day of unchanging cloudless skies and sunshine more depressing than day after day of constantly changing cloudy and stormy skies accompanied by rain. In fact, I find the latter invigorating rather than depressing. That difference becomes the metaphorical setting for “Dark Rains Here and There,” which suggests that a life filled with challenges, with conflicts and changes, both positive and negative, can prove more satisfying than one that is resolved and constant.

What was your writing process like for the book? Do you have a regular writing routine or schedule?
All the poems, and others I could have included, were already written when I started compiling Dark Matters, so the process became one of finding the right mix, deciding which poems to include in the book and in what order they should appear. A gradual process with no schedule involved. Sometimes I’d let the book sit for several days and then return for a fresh look.

When I’m writing poetry I don’t adhere to any routine or schedule. It’s more the case of when the spirit moves me. If I’m working on fiction of any real length, and hope to finish it, I find that a schedule is necessary. I generally write first thing in the morning for from four to six hours, and sometimes return to it for a hour or so later in the day, often before bedtime. Of course when you are working that intensely on a single piece you inevitably become very involved with it. It can take on a reality that will seem more “real” than the everyday world around you, so that you often find your mind keeps working on it even when you are doing something else. Sometimes it even crops up in your dreams.

What most attracts you to writing horror?
I most often write in shorter forms–poetry, flash fiction, short stories–and I feel horror is particularly suited to short forms. Also, I grew up reading Poe, Matheson, Charles Beaumont, John Collier, Robert Bloch, Robert Sheckley, authors who could conjure wonderful dark speculative tales in a few thousand words or even less. I think most writers tend to write what they like to read, and I’m no exception.

What are some of the themes you explore in your writing? Are there any topics you consider “out of bounds” even for horror fiction?
My writing is diverse in terms of genre and style, ranging from broad humor to literary surrealism, with many stops along the way for horror, science fiction, fantasy and noir. Consequently, my themes are diverse. They can be philosophical, sociopolitical, spiritual, or about personal relationships.

I don’t feel that any topic is out of bounds if it is handled properly. For example, one topic that many would consider taboo would be a sympathetic portrayal of a child molester, yet Vladimir Nabokov’s Lolita does exactly that and is often considered one of the great novels of the last hundred years. Gene O’Neill does the same thing in a very different way in his excellent SF novel, The Indigo Man. Of course, these books don’t celebrate the molestation of children, but give us insights into its nature.

What are you writing now?
Currently, Gary William Crawford and I are working on a shared-world poetry collection set in a hypothetical Shadow City, a brutal totalitarian world. It’s proving to be a challenge since our writing styles are very different. I also have a noir novel underway, and several short stories.

What do you see as horror literature’s role in contemporary culture?
With regard to culture, it’s no different from any literature. Of course, it should entertain. But what could be called a higher role is to speak to the world around us, to offer insights into our lives and our times, to enhance our perceptions and existence.

Tell us about an experience or experiences with the HWA that influenced your writing or helped you as a writer.
Winning the Bram Stoker Award has certainly helped me, both in terms of readers and my reputation as a writer. Beyond that, no single experience comes to mind, but the general experience has been very positive. Through HWA I’ve met many writers whom I now consider friends, who are writing in a similar vein to much of my work. Sharing our writings, ideas, etc., has served as a significant impetus to write more.

What advice would you share with new horror writers? What do you think are the biggest challenges most writers face?
I think one of the biggest challenges is the conflict whether you are going to write for the marketplace or follow your own mind and heart. There are few writers fortunate enough to discover such goals coincide. Some decide to cater to the market and its demands. For most, it remains an ongoing balancing act.

As far as advice, I’d say to read, read, read, particularly in the horror genre. More than courses or how-to books or workshops, I believe one learns how to write by reading.

What’s your favorite Halloween memory or tradition?
Nothing scary or extraordinary. I was lucky to grow up in a safe lower-middle-class neighborhood where trick or treat was an accepted tradition. Everyone seemed to know the code: If your porch light was on, that meant you had candy to give away; if it was off, you didn’t. So from the ages of about six to ten, I would think up a costume, usually homemade, and go door to door filling a bag with candy. However, one negative memory also clings to this positive tradition. My parents took a peculiar pride in having the best Halloween treats of anyone in the neighborhood, full-size Hershey Bars and Mr. Goodbars. By the time I returned home, with my bag filled with candy, they would have run out and the porch light would be turned off. So the other kids, my friends in the neighborhood, got the primo treats, while I had to go with cheaper and less desirable booty. Though I guess to some extent it was my own fault. It never occurred to me to trick or treat my own house.

Given a choice, trick? Or treat?
You mean you haven’t read my latest collection, Surrealities?

Have you ever been abducted by aliens?
They’ve tried more times than I care to remember, but I’ve always managed to lose them in the briar patch.

Dark Rains Here and There

She would listen to the insects ticking
against the dusty metal crosshatch
and watch the light
from a low red sun
encroaching on the deep shade of the porch.