As we brace ourselves to face the approaching cold season we need to support and celebrate diverse authors more than ever before. Please enjoy these recommendations from The Seers’ Table.

Tonya Liburd is a multi-talented writer to keep an eye on, her fiction has been long listed in the 2015 Carter V. Cooper (Vanderbilt) Exile Short Fiction Competition. She shares a birthday with

Simeon Daniel and Ray Bradbury, which may tell you a little something about her. Her passions are music (someday!) and of course, words. She is the associate editor of Abyss & Apex Magazine. Her Twitter micro-fiction has been published by @7×20 Magazine, featured for the week of March 28, 2016. She has micro-fiction, “Still Life,” in Grievous Angel (Urban Fantasist) and poetry in Cascadia Subduction Zone; “The Ace of Knives” was a story in Postscripts to Darkness 6, and her nonfiction was published in Mosaics: A Collection of Independent Women. Follow her blog at http://www.Spiderlilly.com or on Twitter at @somesillywowzer.

an award-winning poet, an award-winning short story writer, novelist, political scientist and philanthropist. Canterbury won the First Annual Georgia State Chapbook contest in 1987 for her poetry chapbook, Shadowdrifters … Images of China. She is very active with Sisters in Crime, Mystery Writers of America, Northern California Publishers and Authors, the Society of Children’s Writers and Illustrators, and ZICA Creative Arts and Literary Guild. Keep up on her latest work at her site: http://www.patmyst.com/index.html.

Writer Kelly Sue Milano was introduced to comics the way most five-year-old girls are: getting taken to the Fullerton AMC Theaters to see BATMAN with her Dad in the summer of 1989. Though she wasn’t excited at first, what followed was total and complete love—not just with 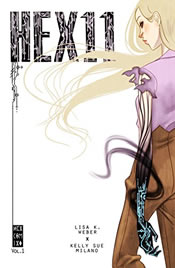 superheroes and comics, but with stories. She has been published in the Orange County Register and Los Angeles Times and has contributed to HelloGiggles and LA Lady Magazine. Kelly Sue is a sucker for Nabokov and fancy coffee and currently lives in Los Angeles.

Recommended reading: HEX11, the epic story of one young witch living in a futuristic dystopia where magic has been discovered as a new technology. When she stumbles on a firefight between a demon mercenary and a black market magic dealer, she finds herself in the center of a sinister corporate conspiracy.

Alyssa Wong studies fiction in Raleigh, NC, and really, really likes crows. She was a finalist for the 2016 John W. Campbell Award for Best New Writer, and her story, “Hungry Daughters of Starving Mothers,” won the 2015 Nebula Award for Best Short Story and the 2016 World Fantasy Award for Short Fiction. Her fiction has been shortlisted for the Pushcart Prize, the Bram Stoker Award®, the Locus Award and the Shirley Jackson Award. Her work has been published in The Magazine of Fantasy & Science Fiction, Strange Horizons, Nightmare Magazine, Black Static, and Tor.com, among others. Alyssa can be found on Twitter as @crashwong.

Eden Royce is descended from women who practiced root magic in her native Charleston, SC. She’s been a bridal consultant, a reptile handler, and a stockbroker, but is now content to write dark fiction about the South from her home in the English countryside. Her stories have been published with several presses, including Kerlak/Dark Oak Press, Sirens Call Publications, and Blood Bound Books.

Summary: Pull up a rocking chair and sit a spell. Soak in these tales of Southern Gothic horror! Sinister shopkeepers whose goods hold the highest price, a woman’s search for her mother drags her into the binding embrace of a monster, a witch doctor’s young niece tells him a life-altering secret, an investigator who knows how to keep a 100% confession rate … This book is a collection of short stories where the setting itself becomes a character—fog-laced cemeteries, sulfur rich salt marshes—places housing creatures that defy understanding and where the grotesque and macabre are celebrated.

Christina Henry is the author of the national bestselling Black Wings(Ace/Roc) series featuring Agent of Death Madeline Black and her popcorn-loving gargoyle Beezle. She is also the author of the dark fantasy Alice and its sequel, Red Queen (Ace Trade). She lives in Chicago with her husband and son. You can visit her on the Web at http://www.christinahenry.net, facebook.com/authorChristinaHenry, and on Twitter @C_Henry_Author. 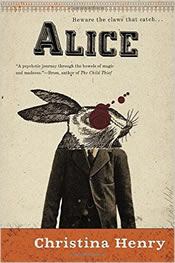 Recommended reading: Alice. In a warren of crumbling buildings and desperate people called the Old City, there stands a hospital with cinderblock walls which echo the screams of the poor souls inside. In the hospital, there is a woman. Her hair, once blond, hangs in tangles down her back. She doesn’t remember why she’s in such a terrible place. Just a tea party long ago, and long ears, and blood … Then, one night, a fire at the hospital gives the woman a chance to escape, tumbling out of the hole that imprisoned her, leaving her free to uncover the truth about what happened to her all those years ago. Only something else has escaped with her. Something dark. Something powerful. And to find the truth, she will have to track this beast to the very heart of the Old City, where the rabbit waits for his Alice.

Ezeiyoke Chukwunonso is an MA graduate of Creative Writing, Swansea University Wales. His short stories, poems, and nonfiction have appeared in a couple of journals, anthologies, and