Panned Helsing: Bad Reviews That Can Save Your Fiction 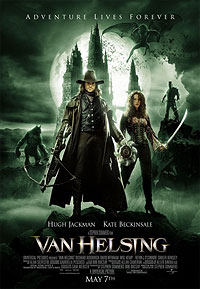 By now everyone who wants to has had the chance to see Van Helsing, whether in a theater or on video. Few critics have had good things to say about the film, a fact that’s easily understandable for many of those who saw it. The thing is, this monster-action movie isn’t without redeeming value, at least for us fiction writers. We lucky few can watch the writing horrors unfold and—if we pay attention to what didn’t work—gain a bit of insight into our own craft. Want fiction that doesn’t bite? Make sure you avoid the monstrous problems staked out by the Van Helsing reviewers below.

1. No one likes a coincidence-driven plot. “Unfortunately, all of the action falls apart in the final sequences, where coincidence plays far too big a role in helping our heroes defeat Dracula.” [Rich Drees, Film Buff Online]

How to fix it: Some minor (read: non-plot essential) coincidences can be made to feel more natural by subtly adding a dash of foreshadowing. In the case of coincidences masquerading as major plot points, look for ways that your character could accomplish his story goal through some action of his own. Extensive rewriting may be called for. If you’ve really painted yourself into a corner and can see no way that your character can extricate himself, it may be time to go back a couple chapters and start fresh.

2. Ditto for wildly improbable feats of skill. “There’s one sequence around a stone bridge at Drac’s castle where Beckinsale, Frankenstein, etc. are all swinging around with ease and no inertia on cables that have to be miles long, are attached to what must be mid-air, and are easily viewable on a dark and stormy night. That’s how silly this all gets…” [Garth Franklin, Dark Horizons]

How to fix it: If you’re writing men’s adventure, you can pretty much skip this one. For the rest of you, it’s a simple fix, really: One good read-through by you or someone you trust should be enough to identify places where you go too far into Action Hero country. Once you know where the problems are, determine if replotting that entire section or just revising the passage in question would best fill the reality gap.

3. Don’t let info-dumps masquerade as dialogue! “The dialogue is all exposition, filled with rhetorical conversations between characters that exist only to provide story background for our benefit….” [David Medsker, Bullz-eye.com]

How to fix it: Read every line of dialogue out loud. Does it sound like a melodramatic Bond villain revealing his nefarious scheme, or a gothic heroine telling people things they already know? When dialogue is slathered too thickly with information, it kills the reader’s willingness to finish your story. Parcel out the information sparingly in dialogue, and keep it sounding natural. Other things you can do with that data-dump are sprinkle it into thoughts, reactions and descriptions, or in many cases delete it as unnecessary to the plot.

4. Avoid seat-of-the-pants plotting and world-rules that change on the fly. “[T]hey seem to be making it up as they go along.” [Rex Reed, New York Observer]

How to fix it: A good outline will go a long way toward preventing this. For writers who love the joy of discovering their story (and story-world) as they write, it’s still a good idea to keep basic story structure—beginning, rising action, climax, resolution—in the back of your mind as you write, and to make notes on decisions you come to in the heat of creating your story.

5. Subplots should complement your “big picture” plot, i.e., Don’t be afraid to delete a plot thread that isn’t working. “But the way to the count is crowded with multiple, confusing subplots. You’re shunted from one earsplitting episode to another with barely a breath in between; none of them seem particularly connected.” [Desson Thomson, Washington Post]

How to fix it: After your first draft is finished, go section by section through your novel or story, writing down when each thread or subplot is introduced and what happens in it during each subsequent section. Write a one or two sentence summary of the subplot (max 25 words or so) as well as a three or four sentence summary of your overall plot. Delete or revise any subplots that you can’t link to the big-picture plot or that seem to go nowhere. Yes, even if it’s your favorite part and you think it reveals so much about your character that you couldn’t possibly live without it. The reason why: Everything your reader needs to know about your character is best revealed by their actions and reactions to the plot events.

How to fix it: Make a short list of the coolest creatures, devices, concepts, and other plot elements that you got to write about in the story; the stuff you were really jazzed about when the inspiration came to include it. Does it all hang together? If not, take a hard look at what works best for this story. Take out the ones that don’t seem to fit in well with the others, put the dispossessed “cool” concept somewhere in the back of your mind (and keep a written record too) where it can marinate. That cool idea may just be the seed of your next story!

7. The fictional world must make sense. “Why would anyone remain in a village that was continually used as a vampire feeding ground, even if the vampires “only” took a villager or two a month? Why would someone build a road right alongside a cliff and not put up any kind of railing?” [Rich Drees, Film Buff Online]

How to fix it: Take a long hard look at the motives of every character (including those without speaking parts, and organizations/cultural institutions) and see if what they are doing in the story really makes sense, based on their selfish interests. Treat your setting as a silent character. It wouldn’t make sense for a Giant’s castle in a fairy tale to have an arsenal stocked with man-sized weapons, would it?

8. People like their stories to be about, well, people. “Everybody has issues, which is an interesting touch, but nobody builds compelling characterizations around them, which isn’t interesting at all.” [Bob Strauss, U-Daily News] This one may be the most important lesson to be learned from Van Helsing; it gets a second quote: “Nor is there a shred of psychology to the characters, human or otherwise, thus foreclosing any emotional connection with them.” [David Sterritt, Christian Science Monitor]

How to fix it: Remember those plot and subplot summaries you did up in #4 above? Read through every one of them, and see if you can identify who is the most important subject in each sentence. In every scene of your story, someone is benefiting and someone is losing out. Make sure your reader can tell that your story is about those people, not just a displaced series of events that reads like a set of lab notes.

Unless of course, they’re Dr. Frankenstein’s lab notes. On second thought, not even then.

Lon Prater is a retired Navy officer by day, writer of odd little tales by night. His short fiction has appeared in the Stoker-winning anthology Borderlands 5, Writers of the Future XXI, and Origins Award finalist Frontier Cthulhu. He is an avid Texas Hold’em player, occasional stunt kite flyer, and connoisseur of history, theme parks and haunted hayrides. Visit www.lonprater.com to find out more.