Other Terrors: An Inclusive Anthology 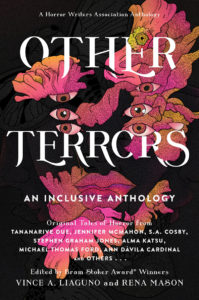 An anthology of original horror stories edited by Bram Stoker Award® winners Vince A. Liaguno and Rena Mason that showcases authors from historically excluded backgrounds telling terrifying tales of what it means to be, or merely to seem, “other.”

Offering new stories from some of the biggest names in horror as well as some of the hottest up-and-coming talents, Other Terrors will provide the ultimate reading experience for horror fans who want to examine fear of “the other.”

Be they of a different culture, a different background, a different sexual orientation or gender identity, a different belief system, or a different skin color, some people simply aren’t part of the community’s majority—and are perceived as scary. Humans are almost instinctively inclined to fear what’s different, and there are a multitude of individuals who have spent far too long on the outside looking in. And the thing about the outside is . . . it’s much larger than you think.

In Other Terrors, horror writers from a multitude of underrepresented backgrounds have created stories of everyday people, places, and things where something shifts, striking a deeper, much more primal, chord of fear. Are our eyes playing tricks on us, or is there something truly sinister lurking under the surface of what we thought we knew? And who among us is really the other, after all?

“The subtitle, An Inclusive Anthology, hammers home what Bram Stoker Award winners Liaguno and Mason have assembled: a trailblazing anthology in which LGBTQ+ characters and people of color are both feared and preyed upon in jolting, haunting, sometimes funny, and/or graphically violent tales.”
—Kirkus (Starred Review)

“This anthology focuses on the figure of “the Other” in horror fiction, particularly by engaging with horror and its relationship with the various systems of oppression that deem people “other” in the first place…There is a wide array of types and genres of horror on offer in this collection, which should more than satisfy any reader interested in exploring the fear of otherness, in life or in fiction.”
—Booklist (Starred Review)

“Stoker Award–winning editors Liaguno and Mason cleverly subvert the common horror trope of the monstrous other in this powerful anthology that spotlights 24 writers with marginalized identities. With impactful writing and authentically embodied characters, this anthology succeeds by lifting up a diverse and skilled group of authors and letting them dive deeply into the horror that sits next door to their own lived experiences. The result is unmissable for horror fans of all backgrounds.”
—Publishers Weekly (Starred Review)

“This trailblazing anthology features stories that explore the power dynamics of ‘otherness’ in ordinary situations that contain all the elements of horror, striking fear into the human heart almost instinctively: homophobia, racism, ageism, colonialism. Who, really, is the other?…If the opposite of love is fear (not hate) as the Bible states, then living on earth is becoming an increasingly scary place indeed where any of us, all of us, at some time or another are the other. Fans of horror will appreciate OTHER TERRORS: AN INCLUSIVE ANTHOLOGY for many generations to come.” – Laura Moreno, Bay Area Reporter

“An essential new addition to the reading list of any horror lover or queer fiction aficionado, Other Terrors features some of the finest minds in writing with their takes on embracing “the other” within. Horror fiction has oft been a place where difference = fear, whether that’s fatphobia in Stephen King, transphobia in Silence of the Lambs, or xenophobia in the works of H. P. Lovecraft, and it’s refreshing to read a collection focused on inclusivity, not cheap, offensive thrills.” – CrimeReads

“The line up of contributors for this one is OUTSTANDING. The introduction by the editors examining how damaging the idea of the other can be in society and the role it has played in horror sets the entire collection up so well. From Tananarive Due’s story of familial horror and shame to the interesting method of survival developed by Usman T. Malik’s Pakistani islanders, horror fans will be hard-pressed to find a story that they dislike. On the contrary, stories from this collection will disturb readers long after they’ve been read. In the best way, of course.” – Book Riot

“…spine-tingling tales that interrogate who – and what – terrifies us.” – Poets & Writers Magazine

“Wow. What a gangbuster list of horror stories…just read this thing. It was so so freaking good.” – Cannonball Read

“What a great collection of horror tales, and one that expands the picture of who writes the stuff we love so much. This book serves as proof, if it was needed, that chilling, blood curdling and disturbing work can come to us from all quarters. An absolute delight. Curl up with this one and tremble.”
—Victor LaValle, author of The Ballad of Black Tom and The Changeling

“An extraordinary and very welcome showcase, Other Terrors brings us darkly wonderful and beautifully hideous stories from some of the best authors working in the genre today. Some will gravitate toward this volume due to the diversity of voices included, while others will be drawn by the reputations of some of the writers within, but however you come to Other Terrors, you’ll be rewarded. Don’t miss it!”
—Christopher Golden, New York Times bestselling author of Road of Bones and Ararat

“This timely and groundbreaking anthology offers up a wickedly talented pool of diverse perspectives who know that the best of horror is here to unmask difficult truths, chainsaw oppressive systems, interrogate notions of “the other,” claw and gnaw at cultural and political unease, and—yes—scare the hell out of you.”
—Benjamin Percy, author of The Unfamiliar Garden, The Ninth Metal, and Thrill Me