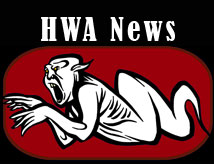 It’s scary out there. Especially if you’re a teen. It’s a frightening world, and we live in troubling times. Globally, locally, even in the safety of our own bedrooms.

It’s about to get a lot scarier.

The Horror Writers Association and Simon & Schuster Books for Young Readers will launch “Scary Out There,” an anthology of all-original horror stories for young adults, written by an incredible line-up of world-class bestsellers. New York Times bestseller and multiple Bram Stoker Award® winner Jonathan Maberry has gathered together a veritable who’s who of A-listers to tell stories that explore what horror means to teenagers.

In addition, the anthology will include stores from the general membership of the Horror Writers Association (HWA).

For more about the Horror Writers Association, visit www.horrorwriters.org, or @Horrorwriters on Twitter, or https://www.facebook.com/groups/Horrorwritersassoc/.

2 comments on “New Horror Anthology for Teens from HWA”