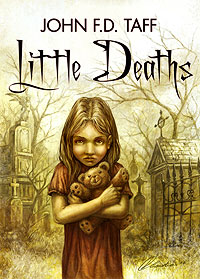 You think you’ve got bad dreams? Consider author John F.D. Taff’s nightmares. How about the one where a guy resurrects his dead girlfriend with a set of the prop neck bolts used on Boris Karloff in the 1932 classic Frankenstein? Or one where the ghost of the author s dead dog keeps coming back to entice him into death so they can be together? Or the one where a guy loves candy to death?

Taff has the kind of nightmares no one wants. But it’s nightmares like these that give him plenty of ideas to explore; ideas that he’s turned into the short stories he shares in this new collection Little Deaths.

Little Deaths features 19 pieces of short horror fiction; some have appeared previously in print elsewhere, others appear for the first time here. All of them are chilling, weird looks at the human condition from a decidedly dark perspective.

BOLTS
CALENDAR GIRL
BUT FOR A MOMENT MOTIONLESS
THE WATER BEARER
THE CLOSED EYE OF A DEAD WORLD
SNAPBACK
THE MIRE OF HUMAN VEINS
THE SCENT
CHILD OF DIRT
ORIFICE
HELPING HANDS
IN MEN, BLACK
DARKNESS UPON THE VOID
SHARP EDGES
THE LACQUERED BOX
HERE
THE TONTINE
THE MELLIFIED MAN
BOX OF ROCKS
NOTES
ACKNOWLEDGEMENTS