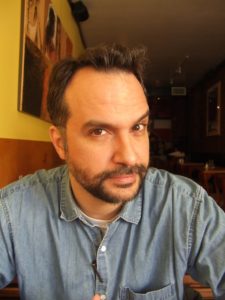 Born and raised in Brooklyn, Richie Narvaez writes in multiple genres about Latinidad, Puerto Rico, urban culture, and social issues. His horror/spec fic story “Room for Rent,” from the anthology LATINX RISING was read by LeVar Burton on the LeVar Burton Reads podcast. Richie’s most recent novel is the historical YA mystery HOLLY HERNANDEZ AND THE DEATH OF DISCO, which received an Agatha Award and an Anthony Award. His latest work is the anthology Noiryorican. Visit him online at www.richienarvaez.com.

I was an awkward, shy kid and there were things going on in my home I was clueless about, that I didn’t understand. But I felt something was off. So I used to draw, lots of stick figures falling into volcanos, which tells you something about my state of mind. Humans create art because they need to express something that they can’t express normally. So my original plan was to be a cartoonist—but then I took Creative Writing in high school. The bug bit. I was doomed to be a writer after that.

Like Dracula beckoning me with his tarantula fingers? That may have been it. I grew up watching the Universal monsters on Sunday afternoons and on The 4:30 Movie in New York. I think what I enjoyed most was the melodrama and the pathos. Today, I enjoy mostly non-supernatural horror. I’ve written about chupacabras and ghosts, but I mostly write spec fic, non-supernatural horror, mystery, and noir—which is parallel to horror. Think of Poe’s “The Tell-Tale Heart.” It’s horror but it’s also a crime story where the narrator is undone by his guilt. You don’t get much more noir than that.

Oh yeah! I enjoy showing my people are complex and three-dimensional, not just villains, and not just heroes or Mary Sues—Maria Suzannas. Like the protagonist in my story “Black Friday,” which is in Noiryorican. He’s macho and a math geek, and it’s too bad his girlfriend may be a cannibal. Or the grandmother in “Galán,” from the anthology Latinx Screams. She’s a Luddite abuela—until she sees an advantage in having a lethal android in the house.

I like how flexible horror is, how it can have its place in a lot of the different things I write. It’s shown me not to cast my work or myself in stone.

Much of the genre we know comes from Europe and was established by the conquerors, the colonizers. But we’ve been seeing more tropes come directly from the people and the lands that were conquered and colonized. They’re freshening up old tropes and, I hope, creating new tropes for the future.

When I was growing up, when a Puerto Rican showed up in horror it was usually something like the Puerto Rican serial killer-turned-demon in The Possession of Joel Delaney or the evil santero in Nicholas Conde’s The Religion—which became the movie The Believers. So, not a great track record. Frankly, it’s only been in the last few years that I’ve seen a shift from those stereotypes in horror. Things are better, but they still need to improve.

Everyone probably knows Carmen Maria Machado and Ann Dávila Cardinal, who are amazing. Many people may not know Charlie Vázquez, who writes quietly disturbing slipstream stories. And I have to shout out V. Castro and Cina Pelayo, who put together the great Latinx Screams collection last year.