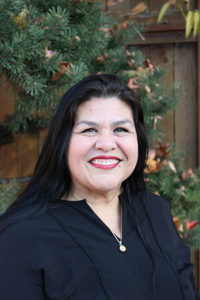 Guadalupe García McCall is the author of four award-winning YA novels, some stories, and many poems. Among the many accolades bestowed upon her works, her debut novel, UNDER THE MESQUITE, received the prestigious Pura Belpre Author Award and her second book, SUMMER OF THE MARIPOSAS, was an Andre Norton Award for Young Adult Science Fiction and Fantasy Finalist. Though she calls Texas home, she is an Assistant Professor of English at George Fox University and resides with her husband in the Pacific Northwest. Her next book, THE KEEPER, is due from Harper Collins on January 25, 2022.

The first time I can remember wanting to write, was when I was five years old and my father put a pencil in my hand and showed me how letters were shapes that told stories. “The S is a serpiente, sitting up on its tail,” he said quietly, as he added a tightly coiled rattle to the end of that serpentine shape and then moved up and put eyes and fangs and a tiny, forked tongue on the diamond-shaped face that was looking back at us from my paper. I recreated that shapely serpent over and over again, thrilled at the way the snake came to life every single time. And that’s what did it. I saw the magic hidden within that knife-sharpened pencil and I was hooked! This is it, I told myself. This is what I want to do for the rest of my life!

There was no way I was ever going to escape the horror genre. As a Mexican American, an immigrant child living in Eagle Pass, Texas, I grew up on both sides of the US/Mexico border, where stories of cucuys and lechuzas abound. Horror stories were and still are everywhere for us. My father and his compadres told stories of giant snakes with fangs on their tails by the campfire in San Vicente, Coahuila, which we visited every weekend because we had family there. In Piedras Negras, my grandmother and my aunts sat around the kitchen table after dinner in their house in Las Cien Casas and told stories of the Santa Muerte, the personification of Death, and their encounters with other ghosts and specters. In the United States, my family gathered around the radio and listened to stories of the giant bird that was terrorizing our border towns from the very lips of people who had been victims of the dark, menacing creature. Up and down the Rio Grande, from Del Rio, to Laredo, to McAllen, all the way down to Brownsville, people were being attached as they left work, outside businesses, driving home after dark, even in their own back yards! It was frightening to listen to the quiver in their voices as they relived the terror. And, after all that, my mother always put us to bed by telling us about the horrible wailing woman, La Llorona, who would come get us if we didn’t go to sleep. Nope. There was no way I was ever going to write without blending horror into my stories. It’s part of my identity, part of what makes my writing authentic.

As a writer of color, I feel like I do have a responsibility to my community to portray them as authentically as I can. I can’t help but write about what I know, and I know me, my family, and my community. I know what we love, what we value, and what we are most afraid of—so I wouldn’t be authentic and true to who I am and where I come from if I didn’t write about those things. However, I’m also an educator, and as such I’ve seen what not having books that represent the Latino experience does to students of color—how it erases their stories, excludes them from the conversation, makes them feel like they’re invisible, unimportant. So, as a Mexican American writer, I want to write stories that not only illustrate our lives but stories that give us hope because, no matter how much horror we see or experience in the world, hope is always a guiding light. Hope will see us through.

When I was a little girl, one of my favorite shows was Scooby-Doo. I loved Daphne and Velma, Shaggy and Scooby, and Fred and the Mystery Machine that took the kids on new adventures, always shedding light on the darkness. I loved how the kids, though they were shaking with dread, never let fear stop them. They followed through, exposing the true villain, who was interestingly enough always a human being. I learned a lot from that show, how to be brave, how to seek truth, and, above all else, how to work together to build a better world. Writing horror is my Mystery Machine. It has taught me to face my fears. Because when you’re an immigrant, when you’ve been persecuted, harassed, bullied, disrespected, and pushed around because of the color of your skin, the place you came from, or even the way words come out of your mouth, you can’t help but grow up feeling afraid. But when I write, especially when I write horror for children, as I have in my upcoming book, The Keeper, I face those frightening experiences head on. I illustrate the dark side of the human condition in an effort to expose the truth that is always hiding behind the mask of terror.