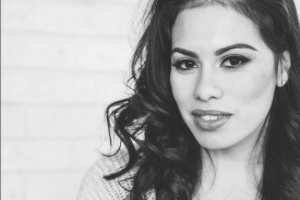 K. Garcia Ley was born in the Dominican Republic, and moved from NYC, to northern New Jersey, to the Derwood, MD, graduated from the University of Maryland with a degree in Criminology and Criminal Justice and specialized in why good people do bad things, a topic she frequently questions in my stories. She participated in VONA in 2020 with Tananarive Due, and A World of Black Writers/Hurston workshop with Dolen Perkins-Valdez. Her dark science fantasy, Long Live Anacaona Guey, was nominated for Pushcart Prize, and another piece placed second in the Voyage YA First Chapters contest.

Currently, she has five short stories published, the most recent in Fantasy magazine titled “How to Make Love to La Ciguapa,” an atmospheric folktale that centers on colonialism and the body. As of right now, she is drafting a YA thriller about a Dominican socialite who must collect her dead sister’s body— located at a creepy abbey in Washington, D.C.—if she wants to keep her trust fund.

It took me years to take the plunge to actually start writing fiction. Like pen to paper, butt-in-chair, ‘I’m going to do this,’ type of writing. Over the years, I did everything but write fiction. Social media posts, newsletters, academic manuscripts, political white papers—you name it. I wrote it. I wrote everything except what I wanted to write. I can’t pinpoint a moment, but I can direct you to a book that inspired me to start my writing journey. The famous one by Anne Lamott, Bird by Bird. I used to beta-read for self-published authors, and there was one author who I had become close with. I emailed her that I was legit scared to write fiction, and I didn’t know how. I’m a mom of three. With a house. A small business. I had just lost a baby. Will people even like my writing? And then lo and behold, she sent me the book and it changed my life. Lamott taught me about the shitty first draft, the perils of perfectionism, and that I didn’t have time to waste to be afraid of writing. I still am afraid sometimes, very afraid, and sad, and filled with doubt, but that’s okay. For me, it’s okay to have all the feelings so long as I make progress, however tiny those steps might be. I haven’t looked back since.

When I was a kid, I felt like horror was the most honest of all the genres. I could relate to the fears of the characters in the horror books I read.

Yes. I am drawn to atmospheric, moody places. Give me all the dim castles, creepy-looking or seemingly innocent villains, messy characters plunged into frightening, violent settings…But on a deeper level, I was drawn to the mystery, to the uncertain incoming dread, to the fear of the unknown. There’s something titillating about the genre. It’s both mesmerizing and frightening. Skin-crawling and exciting.

I was also drawn to dark fantasy and horror’s villains and was so intrigued by their back stories. I think that’s one of the reasons I majored in Criminology and Criminal Justice in college. I studied why good people do bad things (hello General Strain Theory). Combine my Criminology degree with my love of Edgar Allen Poe and Dominican monsters? Of course I would be drawn to horror’s nature, and naturally worked it into my stories.

100%. Always. I don’t know how to write any other way, except for Latinx. My characters have culturally Latinx names and culturally Latinx backgrounds. Even if it’s a character from another planet, I love to use Taino language for characters and places because there are countless Taino words in our Dominican dialect. Using them connects me with myself and my country. As for Latinx themes, the genre gave me the platform to study fear via colonialism, the body, identity, all in non-Western settings.

Ultimately, when I put down my pen, I want to portray my version of my story with my voice. Whether it’s dark fantasy, horror with a romance, or a genre-split novel–at the end of the day, I want to portray connectedness with the reader, a ‘let-me-take-you-on-my-ride’ kinda’ thing.

First off, the number of LatinX authors represented in the genre is growing, and that makes me happy and bubbly inside. But l think there is plenty of work to be done to bring the ladder down for dark fantasy and horror newbies. My hope is for fresh, new voices, for stories that share different versions of the Latinx community.

I will NEVER forget my first Dominican horror film, which also happens to be the countries’ first horror film ever made. It’s about a girl named Andrea who removes a sacred cross from a tomb that unleashes a vengeful spirit. For a low budget film, Andrea scared the living day lights out of me.

I’m cheating here but I’d like to add that I enjoy Guillermo del Toro’s movies. He made up some cool monsters I still can’t unsee.

There are two authors that deserve credit for writing horror elements into their stories even though they are not technically horror or dark fantasy writers. I can’t get them out of my mind, though, because their worlds equally scare and mesmerize me: Rita Indiana and Brenda Peynado. Both Dominican, too.

I was told the following by a dear friend and mentor: Anytime you worry about going too dark,
GO DARKER.

Write messy. It doesn’t matter if you forget the comma, or the exact rule of the dreaded semi-colon. (I don’t remember it either. Shout out to all the editors out there). Just write. Without inhibition. I believe in you.