Welcome to the latest edition of “Know a Nominee,” the interview series that gets you up-close and personal with this year’s Bram Stoker Award nominees. In this post, we catch up with Cat Winters, who’s nominated in the category of Superior Achievement in a Young Adult Novel for In the Shadow of Blackbirds (Harry N. Abrams). 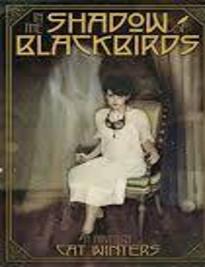 DM: Can you please describe the genesis for the idea that eventually became the work for which you’ve been nominated? In the case of a work wherein you’ve written multiple stories (like a collection) please choose your favorite part and discuss.

CW: When I was twelve years old, I saw a Ripley’s Believe It or Not TV episode about the Cottingley Fairies, a real-life story of two English girls who fooled the world into believing they had photographed fairies during the tumultuous World War I time period. Years later, I stumbled upon the 1997 Smithsonian magazine article “The Man Who Believed in Fairies,” by Tom Huntington, and I learned even more about the Cottingley hoax, as well as the strange and entrancing history of séances. I became instantly fascinated with the way WWI, the deadly Spanish influenza, and the Spiritualism craze intersected in 1918 to create a tense atmosphere of fear and paranoia.

It would take twelve more years, a couple of manuscript attempts, my discovery of the history of early-twentieth-century spirit photography, and a conversation with my agent before the plot of In the Shadow of Blackbirds would fall into place, but everything first began with that old TV show and the 1997 article.

CW: I had spent well over a decade trying to sell adult fiction manuscripts (unsuccessfully), and I learned early on that historical fiction is extremely difficult to convince publishers to buy. I went into the writing of In the Shadow of Blackbirds knowing that the historical setting was a huge strike against the book, so I turned the novel’s focus toward the universal desire to overcome the horrors of our own lives.

The most rewarding aspect has been hearing from fans who usually shy away from historical fiction . . . or even from ghost stories. The novel isn’t a typical ghost tale, and it’s not a typical historical novel, but readers from all walks of life have been embracing the book. Everyone from thirteen-year-old girls to older gentlemen have written to tell me they were rooting for my protagonist, Mary Shelley Black (yes, she’s named after the Mary Shelley), as she struggles to survive the darkness of 1918 America.

DM: What do you think good horror/dark fiction should achieve? How do you feel the work for which you’ve been nominated fits into that ideal?

CW: I feel that good horror/dark fiction should hit readers on a visceral level. It doesn’t matter if the horror is psychological or physical; the reader should feel the book deep down in their gut. My own personal favorite horror stories remind me of roller coaster rides: they start off by slowly planting prickles of dread in my stomach and then gradually intensify to the point where my heart pounds and my eyes open wide, and I want the whole experience to stop and keep going at the same time. When I turn the last page of an exceptional horror story, I’m both relieved to be finished and eager to obtain that same rush again.

I frequently receive notes from readers who let me know that In the Shadow of Blackbirds induced nightmares and/or tears, and they tell me that they hate me for what I did to my characters, while still loving the book. Those strong emotional reactions make me feel I’ve successfully done my job as a writer of dark fiction.

CW: I really like knowing how a book is going to end before I sit down to write it. As a reader, I’m in awe of books that give me a major emotional punch in the conclusion, and I’m even willing to forgive slow beginnings or sagging middles if an author wows me in the end. So, I make sure I have a basic road map with a final destination before I embark upon the actual writing.

Dialogue, especially intense and/or intimate conversations between two people, is my favorite part of a novel to write, so those scenes tend to flow easiest for me. I usually get the most hung up on the transitional scenes that fall between the big, exciting chapters. For those particular sections, which tend to be quiet yet essential, I work on digging further into the characters and bringing them more fully to life, often by turning to that love of dialogue. Not every scene can involve the protagonist getting scared out of her wits. Valleys are needed in a story to make the peaks more intense. I just don’t want to put anyone to sleep when we’re dipping down into those valleys.

CW: Passion is the key ingredient to success in this business. I struggled to find a publisher for over fifteen years, but writing was always one of my major passions in life, so I never gave up, even when the odds seemed stacked against me (which happened often). Whenever I work on a novel that I feel has a strong shot at getting published, I pour my entire soul into the pages and ensure it’s as strong and polished as it can possibly be before I send it out to my agent and editors.

Find critique partners who will offer honest feedback, and listen to your early readers and the agents who express an interest in your work. Be prepared to revise your work—and then to revise it again and again to make it unforgettable. The process will take countless hours and plenty of sweat and tears, but if you fall madly in love with your story and do everything you possibly can to give it a fighting chance, you will eventually succeed.

CW: I live in Portland, Oregon, so I’m thrilled to pieces that I can easily head into the city to attend the Bram Stoker Awards banquet. I’m really looking forward to meeting other nominees and to have a chance to be in a room in which everyone understands why a regular-seeming person like me would want to explore the darkest corners of the human mind. I’ll be accompanied by my husband, a high school math teacher who isn’t a huge fan of horror, and I think he’s concerned everyone around us will be dressed like characters from slasher films or The Walking Dead. I have a feeling we’ll both have a blast, though.

I’m extremely honored to be a Bram Stoker Award nominee, and I’m so grateful to my peers for recognizing In the Shadow of Blackbirds.

Cat Winters’s critically acclaimed debut novel, In the Shadow of Blackbirds, was named a 2014 Morris Award Finalist, a 2014 Best Fiction for Young Adults pick, and a School Library Journal Best Book of 2013. Her upcoming novels include The Cure for Dreaming (Amulet Books/October 2014) and The Uninvited (William Morrow/Spring 2015), and she’s a contributor to the 2015 YA horror anthology, Slasher Girls & Monster Boys. She lives in Portland, Oregon. Visit her online at www.catwinters.com.