Welcome back to ‘Know a Nominee’, the interview series that puts you squarely between the ears of this year’s Bram Stoker Award nominees. Today’s nominee is the King of Pain, John F.D. Taff, nominated in the category of Superior Achievement in a Fiction Collection for The End in All Beginnings. 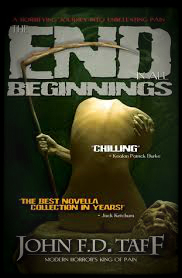 JFDT: I attended my first HWA/WHC two years ago in New Orleans and had a great time meeting people. One of them was RJ Cavender. We’d “known” each other because he’d bought stories from me, but that was the first time we’d met face-to-face. When it was over, we emailed back and forth, and he asked to see some of my longer works. He suggested a novella collection, and The End in All Beginnings was born. I was attracted because I’d never really thought of a novella collection, and I had a few of them since they’re a bit trickier to sell. Seemed like a good plan, and events have proven the wisdom of RJ’s idea.

JFDT: Actually, it wasn’t all that difficult once the wheels were rolling. RJ reviewed the stories, picked the ones he thought were strongest and set about doing what he does best—putting them through the wringer. On my end, I’d built a great relationship with Tony Rivera over at Grey Matter. I mentioned the project to him and shared the rough drafts. He bit before the editing was done and before we had to submit the work to anyone else. In terms of rewarding, it’s always rewarding to see a project take shape, grow legs and sprint off into the work. And this collection has definitely done that.

JFDT: Good horror/dark speculative whatnot needs to do what all fiction needs to do. First, it needs to tell a story. Period. Second, it needs to make you feel something, and as far as I’m concerned, make you feel something beyond horror. Horror works best when it’s bonded with another emotion. The End in All Beginnings is proof of concept of that idea. My publisher doesn’t promote me as the King of Pain for nothing.

JFDT: I’m doing this full time now, so getting stuck for too long is not an option. I write every day…well, most every day (wink, wink), and if something isn’t going well on what I’m working on, I try to move on to another piece—a short or whatever—that I have going. I generally have a few plates spinning at the same time, so there’s no real excuse for dithering. Not that I don’t dither…it’s just I try to set things up so that there’s a minimum of that.

JFDT: If you’re a writer, write. Let an editor—a real-to-gosh editor—work on your stuff to smooth things out. But know when to listen to an editor and when to listen to the story. It is yours in the end. And if you’re an editor, edit. Don’t rewrite an author’s stuff. Let the voice speak on its own, not with your accent.

JFDT: I am attending and looking forward to it. Aside from everything else, it’s a great place to meet people and renew acquaintances. So if you see me, come up and say, “Hi!” Networking is the key, and the WHC is a great place to get to know other people in the industry. I tend to be reclusive, so attending these events, which I only began two years ago (after 20+ of writing) has put rocket engines on my career.

As far as the Stokers go, it’s an acknowledgment of where you are in your career by your peers. An affirmation, if you will. It is indeed an honor to be nominated.
DM: What scares you most? Why? How (if at all) does that figure into your work or the projects you’re attracted to?

JFDT: I dunno what scares me the most. Really. I suppose that’s one of the reasons I navigated my way to horror writing. I think, in some regard at least, that I’m poking around trying to find the things that really scare me. Writing horror lets me explore a lot of these topics, most of which I’d never, ever encounter in my real life anyway. So far, though, I haven’t really hit on some single, defining personal fear. I hope I do, though!

JFDT: I read a lot of history these days, mostly to ensure that someone else’s horror ideas don’t leech into my own writing. I did read Josh Malerman’s Bird Box and loved it. Such a fresh take and very brave in how he handled the “monster” of the work. We’re working together on a new project that will be announced soon, so that’s pretty cool. It will also feature some authors I respect—Joe Schwartz, J. Daniel Stone and Erik T. Johnson. Gonna be an interesting offering for later this year. 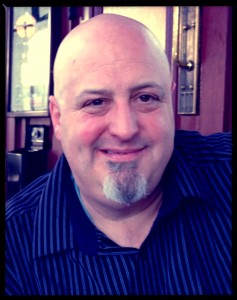 John F.D. Taff has more than 80 stories in publication in such markets as Cemetery Dance, Deathrealm, Big Pulp, Postscripts to Darkness, the Hot Blood series, and Shock Rock II. Six of his shorts have been selected as honorable mentions in Ellen Datlow’s Year’s Best anthologies over the years. His short story collection, Little Deaths, was named the No. 1 horror collection of 2012 by Horrortalk. His Stoker-nominated collection of five novellas, The End in All Beginnings, published by Grey Matter Press, has been very well reviewed and was called “the best novella collection in years” by Jack Ketchum. Books of the Dead Press will bring out two of Taff’s novels this year, Infestation in the spring, and The Orpheus Box later in the year. Grey Matter is also publishing a standalone novella, The Sunken Cathedral, this spring.