Welcome back to ‘Know a Nominee’, the interview series that climbs inside the minds of some of the most talented authors and editors working in horror today: the 2014 Bram Stoker Awards nominees. Today’s edition features poet Corrine De Winter, nominated in the category of Superior Achievement in a Poetry Collection, along with co-author Alessandro Manzetti, for Venus Intervention.

CDW: This was my first collaboration and thus was a challenge, but [it] was interesting to produce a “color” that matched the other work, yet stood on its own merit.

CDW: The challenge was balancing the different views and aspects of my co-author’s work with my own — the result of “Morning” and “Night” created a full-bodied work that heightened the feeling of both works.

CDW: Like all good writing, it should touch the heart, put a spark in the soul of your own creativity. If you cannot “speak” to the human condition as a writer in some way, the reader is only left with an empty feeling.

The poems in “Venus Intervention” dance, flirt and then drive into the heart.
DM: I’m curious about your writing and/or editing process. Is there a certain setting or set of circumstances that help to move things along? If you find yourself getting stuck, where and why?

CDW: I try to clear my mind a bit, re-read my work a short time later and then begin to edit if needed. When I get stuck I usually approach a fellow writer I trust (usually Lisa Mannetti) and have her take a look at it.

CDW: I think the greatest asset to any writer is simply to read good writing. It puts you in the “flow” of proper cadence, space, progression. When I get stuck I reach for a well written book and nearly always gain inspiration from it.

CDW: When I won my first Stoker Award it was absolutely thrilling. I was really shocked quite frankly! Winning it allowed me to finally believe I had a real talent, one that was appreciated by so many writers I admired myself.

CDW: It used to be Death — now it’s Life. For the past few years, I’ve been studying Life after Death and according to many this human life and this planet is like the Wild West. I can’t think of a greater horror story than some of the lives I’ve known. It’s the human condition and how we handle the great labyrinth that is our lives that interests me.

CDW: I love graphic novels. I tend to go back to old books more often than new. Newer writers I really love are Thomas Ligotti, Patrick McGrath, Nick Cave, but am also completely impressed by some of our “crew” like Maria Alexander, Lisa Mannetti and John Palisano. 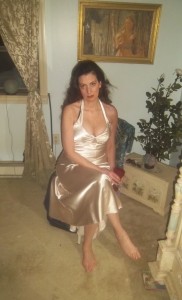 Her latest book of fiction Valentines For The Dead, was published this year, and has garnered many lively reviews.

WHAT OTHERS ARE SAYING:

“Corrine De Winter is a virtuoso of forlorn Romanticism. Her poems are those of one who is perpetually aware that all must end and, in many cases, the sooner the better. In others, a mortal ending is insufficient and others may be required. Admirers of Nico may hear in De Winter’s work echoes of the morbid chanteuse’s voice accompanied by a harmonium breathing its last.”
-Thomas Ligotti

“De Winter’s stories are a strange mix of ethereal worlds, yet vivid and raw, with a timeless wisdom- reminds me of our beloved Rainer Maria.”

“De Winter’s stories have a great quality to them- Saki’s creepy succinctness mixed with the epiphonic resonance of Dubliners-era Joyce. Quite unique.”

William Packard, former editor of the New York Quarterly, was a mentor, publishing De Winter’s work early on and inviting her to write ‘The Present State of American Poetry’, a regular feature in the journal. At Packard’s invitation she read her poetry at the New School in NYC, and continued a rapport with Packard until his passing . Packard was a big supporter of Charles Bukowski and De Winter was published with him several times in his last years.

De Winter won the Bram Stoker Award in 2005 for her collection The Women At The Funeral.
Five of her collections have been Stoker Nominated.

A Naturalist, Philanthropist, Paranormal expert, Artist and the founder of “Small World Fund For Children,” Radio Host for Supernatural Radio, on the Blogtalkradio.com website, De Winter lives between this world and the next.