Welcome back to “Know a Nominee,” the interview series that puts you squarely between the ears of this year’s Bram Stoker Award nominees. Today’s update features Craig DiLouie, nominated in the category of Superior Achievement in a Novel for Suffer the Children.

CD: Many parents have said at some point, “I’d put my arm in a shredder for my kids.” They’d make any sacrifice to protect them, which is noble. 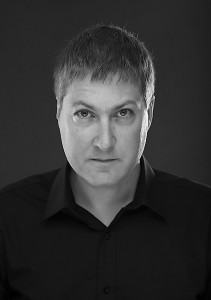 Okay, but would they put somebody else’s arm in a shredder? Two people’s? More? Is that still a noble act, or is it evil–or does the answer depend on whether you’re standing?

These questions are at the thematic heart of Suffer the Children.

In this novel, a disease turns the world’s children into vampires. The children are dead, but if they’re given blood to drink, they reanimate as the happy children they once were–but only for a short time. To keep from losing their children forever, the parents must continually come up with new sources of blood. In the end, the only source left will be each other.

The children are vampires, but they aren’t monsters. The parents are. The parents become monsters over time, and they do so out of the most primal love in the world.

CD: The novel deals with children dying, so I wanted to handle the subject matter carefully. Most important, the story had to be authentic and shorn of anything gratuitous. If the story achieved authenticity, the events and stakes would be horrifying enough without me pushing. I also removed myself as the author as completely as I could from injecting value judgments into anything happening in the story. What the protagonists do is presented as a matter of fact. It’s up to the characters themselves and the reader to interpret those actions.

Another tough aspect was getting the pacing right. The parents don’t just turn into monsters overnight. They do so one little step at a time until they’re rationalizing the unspeakable. The writing was mentally exhausting. The protagonists are taken on a harrowing psychological journey that is horrifying and somewhat heroic at the same time, and I went on the journey with them. I don’t normally fall in love with my characters, but I did this time. I really despaired over what the story and their choices were doing to them.

CD: I believe good horror pushes boundaries and holds up a fractured mirror to the human soul. I believe Suffer the Children accomplishes both. It’s really a story about the human condition and how far a parent will go for his or her children. It makes readers ask themselves, “How far would I go?” Like the novel’s protagonists, they may find the answer unsettling and in the process learn something about themselves while reflecting on the individual nature of good and evil.

I also believe the story should go where it needs without forcing a hopeful resolution just because the reader may be seeking catharsis after reading something extremely dark and disturbing. That may make for a more satisfying reader experience, but if it’s not authentic, I don’t think it should be done. Suffer the Children has what I would consider a very disturbing ending that will haunt readers long after they close the covers. I think if I’d made a happy ending, I would have sold more books–but that wouldn’t have been true to the work. As an artist, I’m glad I stayed true to it.

CD: It was important to me that the events depicted in Suffer the Children feel like they were actually happening, so I worked hard to ground the story and make it as realistic as possible. Finding that balance was challenging. Most of my inspiration came both from the world around me and my internal world as a family man and father.

As far as setting, I’m quite a boring writer that way. I write in solitude and silence, at least when I’m typing. I consider writing to be much more than typing, though. It’s thinking, dreaming, researching, note taking. Long before I start typing, I’m writing. Mostly during those still moments of the day–driving a car, taking a shower, and so on. Even then, it would be boring to watch me do it, though all hell is breaking loose in my head.

My biggest writer’s block came from the pacing. I wanted to show the descent into madness in baby steps, but that risked a great deal of repetition and would have resulted in a very, very long book. I was stuck. In the end, I came up with a device to show time going by while introducing a familiar but new element to the story–by taking the reader into the minds of the children themselves and showing what Herod syndrome is like from their perspective.

CD: Writing is not typing.

CD: When I tell people I’m a horror author, I sometimes get a strange look. Like they’re thinking, “He’s such a nice, mild-mannered guy. I would have never guessed he was a horror author.” Horror writers are like serial killers in that respect. The funny thing is, the stereotype of the horror author as a nice, sunny individual–a popular perception in the general genre writing community–is totally true in my view. I’ve made a lot of great friends through WHC, people with whom I share a business and a passion, and I’m mostly looking forward to reconnecting with them while making new friends at the con. I learn a great deal through the many conversations that happen here and there throughout the con. Those conversations carry on throughout the year by email, phone and social media.

Of course, I’m also looking forward to the Bram Stoker Awards. I can honestly say it’s a true honor just to be nominated by a community I hold in great admiration and respect.

CD: My mortality. That, and anything that could hurt my family. These existential fears fuel the scary dreams in my fiction.

Two interesting books come to mind I’d recommend for a read. One was The Grinding by Matt Dinniman (Necro, 2013). The other is Rain by Brad Munson. Both are apocalyptic stories but with really crazy monsters. The Grinding is really out there, I really enjoyed it. I’m also on an Adam Nevill kick–he’s a terrific horror author. I’m about to dig into Stephanie Wytovich’s Mourning Jewelry, one of her works of dark poetry. I don’t read a lot of poetry, but I really admire the courage and skill it requires.

Craig DiLouie is the author of Suffer the Children (Simon & Schuster, 2014) and other horror novels. He blogs about horror media regularly at www.CraigDiLouie.com.