Welcome back to ‘Know a Nominee’, the interview series that puts you squarely between the ears of this year’s Bram Stoker Award nominees. Today’s nominee is Usman T. Malik, nominated in the category of Superior Achievement in Short Fiction for The Vaporization Enthalpy of a Peculiar Pakistani Family. 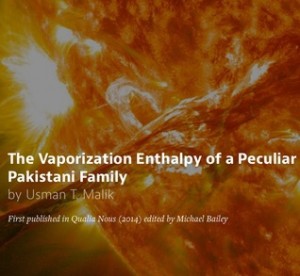 UTM: I was en route to Seattle to attend the Clarion West Writers Workshop in June 2013. CW is a predominantly SF/F workshop and I had never attempted writing SF before. I was trying to think of original story ideas which would appease both my dark and light sides and it occurred to me that, to my knowledge, no one had written a horror story structured to parallel the states of matter. The metaphor underlying such dissolution and the critique therein on a personal, sociopolitical, and scientific level appealed to me. I asked Elizabeth Hand if she had ever read a story written in such a fashion. She said no. Thereupon was born “The Vaporization Enthalpy of a Peculiar Pakistani Family.”

UTM: Actually, it was one of the easiest stories I’ve written. One wishes such magic could happen again, but alas, it’s rare. The story practically wrote itself in a weekend and I finished it hours before the submission deadline for critique by my classmates. I think I knew when I typed THE END that it wasn’t half bad. It had that feel about it.

The most rewarding aspect of writing it was that it was the kind of story I never thought I’d attempt, but time proves us wrong, I guess. This once, pleasantly.

UTM: In my opinion the best fiction, whether dark or not, seeks to have some sort of vision. A sense that it’s bigger than the sum of its parts. Dark fiction in particular needs more in it than meets the eye. It attempts to hit certain notes in our psyche and uses each word and scene in it toward that cumulative effect. Usually that effect is uncanniness or discomfort or plain old horror. To be honest, I never thought of “Vaporization” as a horror story in that sense since the ending is somewhat upbeat, but people have looked at me incredulously when I said that, so I guess my barometer for terror and darkness is a calibrated bit differently than most folks’.

UTM: I’ve been kind of blocked for a year, so not the best time to answer this question truthfully. Usually I take long walks and write at night. I get stuck real bad, I’ve noticed, when I try to write outside my comfort zone. Perhaps that’s what’s happening with this particular piece I’m struggling with. I’m told that’s not necessarily a bad thing.

UTM: Annie Dillard wrote in her 1989 essay “Write Till You Drop” in the New York Times: “You (writers) were made and sent here to give voice to . . . your own astonishment.” The great science fiction writer Ted Chiang quoted this to us at Clarion and I will pass on his pearls of wisdom to the readers of this interview: Try not to let your stories be ordinary. Write stories only you can write.

(This from me:) Also, read. Read the shit out of literature of all sorts from as many cultures and languages as you can muster.

Catching up with old friends and looking forward to good conversations with like-minded folks.

UTM: Loneliness, fear of death, the usual. After my son’s birth, his and our family’s health and safety. Larger questions of life and existence haunt me. The few stories I’ve written try to deal with them.

UTM: Currently I’m reading Ken Liu’s The Grace of Kings, which is an epic fantasy immersed in Chinese history and mythology. Also reading lots of Kelly Link, Saadat Hasan Manto, Joyce Carol Oates, and Thomas Ligotti — I tend to switch and read stories by several writers at the same time. Far as recommendations go, highly recommend the showcased stories at the Weird Fiction Review website run by Jeff and Ann Vandermeer. Of course everyone on the planet needs to read Ted Chiang’s great collection, Stories of Your Life and Others as well as the great Urdu writer of uncanny fiction Naiyer Masud. His translated stories can be read here: http://www.urdustudies.com/Issue12/i12home.html 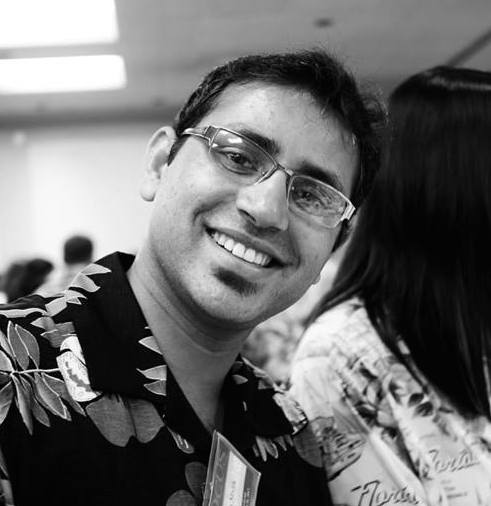 Usman T. Malik is a Pakistani writer resident in Florida. He reads Sufi poetry, likes long walks, and occasionally strums naats on the guitar. His fiction has been nominated for the Nebula and Bram Stoker awards. His stories have appeared or are forthcoming in The Year’s Best Dark Fantasy and Horror, Year’s Best Weird Fiction, The Best Science Fiction and Fantasy of the Year, Tor.com, Nightmare, Strange Horizons, and Black Static among other venues. He is a graduate of Clarion West Writers Workshop. You can find him at www.usmanmalik.org