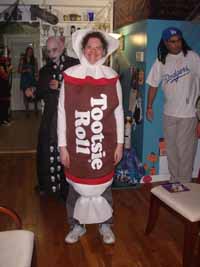 Halloween has always been my favorite holiday, more beloved than Christmas because it’s the most magical day of the year when candy is almost as plentiful as snow on Christmas Day! The trees shed red, brown, yellow and orange leaves that crunch under my feet, a grim reminder that winter’s chill isn’t far behind.

Every year the crisp October air prompted my father to take my twin brother, mother and me to the local farm on Long Island to choose the biggest pumpkin we could find for the momentous occasion. That same night, after the dinner dishes had been cleared, Dad would put some old newspaper on the kitchen table, and hand my brother and me black magic markers and together we would draw a scary face for my father to carve with a sharp knife. We all looked on, fascinated, as he gutted the thing, scooping its innards into a bowl. When he finished, my mother would produce a thick white candle to place inside. We’d carry it gently outside, set it down on the front porch next to the front door, and my mother would light the wick, giving the Jack’O Lantern an eerie glow for all to see.

Every Halloween our Catholic, elementary school had a Ragamuffin Parade. We had to wear horrid, plaid uniforms to class every day, so this welcome reprieve, a true blessing in disguise, enabled my friends and me to dress up in any costume we pleased! Some of my friends dressed up as Care Bares or Strawberry Shortcake. A few of my brother’s buddies dressed up as members of the wildly popular rock band Kiss and assorted Star Wars characters. My brother and I were more original; he became a hobo, complete with a bundle fashioned from a worn, red bandana stuffed with old newspapers tied to the end of a stick. I convinced my father to transform me into an Octopus; he reluctantly agreed. Dad used a large box, magically rounding off the top, trimming the bottom flaps so they resembled sinuous tentacles. He cut armholes, eyeholes and a wide, intimidating mouth! Together, we painted it midnight black, with a shiny silver border around the eyes and mouth for contrast.

My brother, our friends and I all marched around the school parking lot in a long, curvy line snaking our way this way and that while our parents cheered us on! My Octopus won best costume that year! My prize: a plastic Jack’o Lantern filled to the brim with tasty treats, a monster candy haul, which my brother and friends were more than happy to help me devour; all gone in less than an hour.

After we finished trick-or-treating with our friends, our parents would carefully inspect our sweet haul for nasty tricks that might land us in the hospital: needles, razor blades and the like. Once given the all clear, my brother and I would trade. He’d give me all the Tootsie Rolls he’d collected in exchange for my Butterfingers. When we were kids, Tootsie Rolls came in a rainbow of flavors: Lime, Lemon, Orange, Cherry, and Vanilla. I loved the classic Tootsie Rolls, too; the Vanilla ones went to my Mom.

A few years ago, friends of mine on Long Island hosted a Halloween party. I went to one of the many pop-up costume stores in NYC and found a life-size Tootsie Roll! I bought the last one they had. In my subway station a family returning from trick-or-treating paused when they saw me. The mother turned to me and said, “My kids just ate you!” I just laughed at her creepy comment and continued on my way.

At the party after a few drinks, I discovered a bowl full of Tootsie Rolls, unwrapped a handful and proceeded to devour them, proclaiming, “Look! I’m eating my young!”

One of my friends shook her head in disgust and said, “That’s so wrong!”

I rolled my eyes. “If that’s wrong, I don’t wanna be right!”

Thanks to my love of all things Tootsie, I won first prize, a $50.00 American Express Gift Card, for funniest costume!

Amy Grech is giving away one signed copy of Blanket of White. To enter post a message in the comments section below or e-mail memoutreach@horror.org. Winners will be chosen at random. Contestants may enter once to be considered for all giveaways, but multiple entries are permitted.

Amy Grech has sold over one hundred stories and three poems to various anthologies and magazines including: Apex Digest, Fear on Demand, Funeral Party 2, Inhuman Magazine, Needle Magazine, The Flash Fiction Offensive, The Horror Express, Space & Time, The Brutarian, Zombie CSU, and many others. Damnation Books published her second collection, Blanket of White. She has a story in the upcoming Beat to a Pulp: Hardboiled. Amy is an Active Member of the Horror Writers Association who lives in Brooklyn. Visit her website: http://www.crimsonscreams.com. Follow her on Twitter: http://twitter.com/amy_grech.