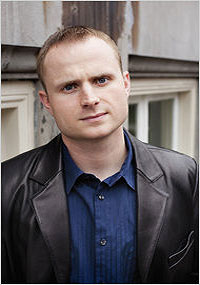 Michael Koryta is a young author with a bibliography that is short (so far) but impressive. His novels have won the Los Angeles Times Book Prize, Great Lakes Books Award, and St. Martin’s Press/Private Eye Writers of America Best First Novel prize, and has earned nominations for the Edgar, Quill, Shamus, and Barry Awards. He recently earned a six-book contract with Little, Brown and Company.

Michael graduated from Indiana University with a degree in criminal justice. He is a private investigator and former newspaper reporter. Michael currently lives in St. Petersburg, Florida, and Bloomington, Indiana.

His first five novels were crime novels, with four featuring private eye Lincoln Perry. With his sixth book, So Cold the River, he branched out into horror.

MK: I did have the wonderful opportunity to publish at an early age, and that was special, certainly. I’ve always written with the hope of publication and the goal of being able to make a living by writing. It’s all I’ve wanted to do since I began to read. I’ve been writing with that goal in mind since I was about eight years old. I just love books, pure and simple.

HWA: What were the influences that sparked your interest in writing, and particularly in writing horror?

MK: Well, I came up in crime fiction. I was really hooked on writers like Leonard, Lehane, Connelly, Chandler, MacDonald, etc. The interest in horror was led by Mr. King, whose book On Writing came out when I was in high school and was also very influential, though in different ways than his fiction. Koontz was an early influence, too, and going way
back, I was a huge fan of a writer named John Bellairs. He was probably the first horror writer to really influence me. As I was writing my first five published novels, all of which were crime novels, I found myself turning more and more toward the horror genre: Joe Hill, Dan Simmons, Richard Matheson, Scott Smith, Ira Levin, to name just a few. And there became this itch to try the form.

HWA: What is your writing technique? Do you create an outline, or do you just come up with an idea, start writing, and see where it takes you?

MK: I don’t outline. The approach is more that I’ll wander off into the darkness with a certain idea, an inciting incident, to steal the screenwriting term. If there’s a character who takes my hand and tugs me along, I’m in good shape. If I have to hunt around for one, it’s a bad sign. I take a lot of false starts in the early going before settling on what’s right for the moment.

HWA: You started out writing detective novels. What made you decide to try supernatural horror?

MK: Love of the genre, first and foremost. I don’t think anybody writes anything good if he or she doesn’t love the chosen form. It also sprang from what I think is a very natural creative desire, the need to try something outside of the comfort zone. I love crime fiction, but I wanted to try something else, to see if I could do it, see how it felt. I think you always need to go with the story that wants to be told and hope that the rest falls into place. The move to the supernatural actually helped my career. I’d been assured by some people that it would be disastrous, but that wasn’t the case at all.

HWA: Tell us about your latest novel, So Cold the River.

MK: So Cold the River had its genesis in the very real history of the towns of French Lick and West Baden Springs in rural Indiana. They enjoyed this glorious golden age when people came from all around the world to soak in mineral springs that were reputed to be of incredible healing powers. Graft and vice of all varieties followed, and then the Depression took the place out at its knees. Seventy-five years later, they began restoring the magnificent old resorts, and the idea of writing about the water as if its reputation had been real came to me.

HWA: Tell us about your upcoming books. Will you be concentrating more on crime or horror fiction?

MK: Well, I can speak with certainty only about those that have been written. The next two–The Cypress House and The Ridge–will both be horror. The former is more of a gangster story, with a character who has premonitions of death. The Ridge is an out-and-out ghost story. Beyond that, I’m not sure. I think it will be a detective novel again. I’m still casting about for firm footing on that idea. I don’t want to commit to any genre, just to individual stories.

HWA: Why did you switch publishers from St. Martin’s Press to Little, Brown?

MK: St. Martin’s wanted me to stay within the realm of traditional crime fiction, particularly the detective series. I was excited about So Cold the River, and they were not. So, we parted ways, and I was very fortunate to find a publisher who was excited about the book. I’m under contract for five more with Little, Brown, and I feel very, very lucky to be there. I hope it lasts a long time.

HWA: Why did you join the HWA, and what benefits are you looking for from your membership?

MK: I’m a book geek. I love talking to writers, getting recommendations on what to read, and being kept up to date on the best new stuff in the genre. It seems as if HWA does a fine job of championing the sort of stories we all love.

HWA: Thank you, Michael, and welcome to the Horror Writers Association.

Stand-alone novels:
Envy the Night
So Cold the River

Upcoming:
The Cypress House
The Ridge