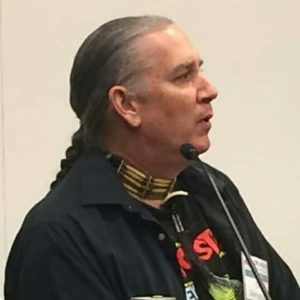 Owl Goingback has been writing professionally for over thirty years and is the author of numerous novels, children’s book, screenplays, magazine articles, short stories, and comics. He is a three-time Bram Stoker Award Winner, receiving the award for Lifetime Achievement, Novel, and First Novel. He is also a Nebula Award Nominee. His books include Crota, Darker Than Night, Evil Whispers, Breed, Shaman Moon, Coyote Rage, Tribal Screams, Eagle Feathers, and The Gift.

In addition to writing under his own name, Owl has ghostwritten several books for Hollywood celebrities. He has also lectured across the country on the customs and folklore of the American Indians, served in the military, owned a restaurant/lounge, and worked as a cemetery caretaker.

Owl is currently working on a new novel and several short stories.

I grew up in rural America, without the benefit of friends or neighbors for companionship. The Internet, social media, and video games didn’t exist then, so books were my only salvation from boredom. Without them I surely would have gone stark raving mad (maybe I did go mad and just don’t know it). Reading was such an important part of my life, I wanted to write stories for others to enjoy. It was my way of paying things forward.

I also wanted to prove to people that Native Americans are much more than the cardboard stereotypes often portrayed in movies and on television. We aren’t heathens, or savages, and drunken Indian isn’t one word. I felt that every accomplishment I achieved as a writer was being shared with other indigenous people, and maybe even opening a few doors for others to follow in my footsteps.

I’ve always been in love with all things scary, even at a very early age. I remember watching horror movies with my family when I was only three or four-years-old, my hands pressed tightly over my eyes during the scary parts, peeking through the cracks between my fingers, promising my parents that I wasn’t scared and then tossing pieces of candy into my bedroom closet later at night so the closet monster wouldn’t eat me. It was a rush, like riding a roller-coaster without all the messy vomiting. And horror literature was just as exciting to me, creating the same tingles of terror as the movies.

In addition to horror movies and literature, I also discovered the magazine Famous Monsters of Filmland at an early age. FM gave me a love for classic monsters that still exists today. Images of Frankenstein, Dracula, and all the other Universal monsters currently adorn my office walls, similar to the images that decorated my childhood bedroom. Once a monster kid always a monster kid.

Do you make a conscious effort to include indigenous characters and themes in your writing and if so, what do you want to portray?

Yes. I’ve used indigenous characters in most of my books and stories, because I wanted to share a culture rich in history, folklore, and ceremony, and often very misunderstood. I also wanted to show that native people of this country have a different way of looking at things than people whose ancestors came from other parts of the world. Like the traditional oral storytellers of my people, I wanted to create stories that were enjoyable while weaving a bit of teaching into the narrative. That way I’m educating in addition to entertaining.

I guess I’ve done a good job of weaving teaching elements into my stories, because my books are being used in an eight-week educational program for youthful offenders at the Orange County Corrections Facility in Orlando, Florida. The young inmates get to read a novel featuring monsters and mayhem, and scenes of bloody carnage, while subconsciously being reminded to listen to their elders and respect Mother Earth.

Writing horror has taught me that I could never come up with anything as scary as what I see each and every night on the evening news. Real life people are far more terrifying than any monster, vampire, or werewolf ever created in fiction or folklore. Just when I think it couldn’t possibly get any worse, the nightly news proves once again that mankind is the most dangerous thing on the planet and the biggest risk to our future.

It has also proven that I have a very warped sense of humor. I often find myself giggling while writing the most appalling scenes of blood and gore. I think many horror writers are like that; we possess the same graveyard humor found in funeral directors and cemetery workers.

The horror genre is constantly growing, evolving, reaching out to find new ways to scare an audience. I’m delighted that we’re no longer relying on the same type of monsters to bring on the chills, but are bringing in frights from formally overlooked cultures and distant regions of the globe. The genre has welcomed a whole new generation of brilliant writers into the fold, bringing in diversity and exciting new viewpoints.

The horror genre always does well during troubled times, and we have been going through some very turbulent years. Horror fiction is escape fiction, and people need an escape now more than ever so the genre will continue to grow.

How do you feel the indigenous community has been represented thus far in the genre and what hopes do you have for representation in the genre going forward?

When I first started back in the mid-80s there were very few indigenous writers working in the horror genre. Also, the stories being published with Native American characters were mostly written by non-indigenous writers. They were entertaining but often not very accurate, featuring characters and cultures that had not been properly researched.

But things have changed in recent years. Now, there are quite a few books written by indigenous authors and people of color, amazing stories that share the history, beliefs, folklore, and even the monsters of different cultures. It’s an exciting time for writers, but it’s even better for horror lovers in search of new chills and thrills.

Who are some indigenous horror authors you recommend our audience check out?

I don’t read a lot of fiction, but Stephen Graham Jones and Shane Hawk have been hitting things out of the park so I would suggest starting with them. Stephen recently won the Bram Stoker Award for superior achievement in a novel. Nina Romberg is another writer worth looking up. She writes mostly romance, under various pseudonyms, but has a couple of excellent horror novels under her belt. I’m sure there are a lot of other indigenous authors I should be naming, but again I read mostly nonfiction.

Never give up. Being a writer can be a lonely, frustrating career filled with long, painful days staring at a blank computer screen and praying to the muse gods for inspiration. It hurts to have a story get rejected when you’ve poured your heart and soul into it, and it’s even more painful to read about a braindead reality star getting a million-dollar book deal when you’re living on ramen noodles and Vienna sausages. But keep pushing on for good things do happen to those who stay the course. You might not get rich, neither did Poe during his lifetime, but you will have earned a position of respect among other horror writers and that is a wonderful thing.