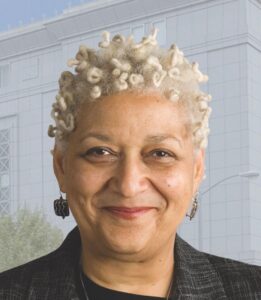 Jewelle Gomez, (Cape Verdean/Wampanoag/Ioway) is a novelist, essayist, poet, and playwright. Her eight books include the first Black Lesbian vampire novel, The Gilda Stories (in print more than 30 years); which was recently optioned by Cheryl Dunye for a TV mini-series. Her work has appeared in numerous anthologies including: Luminescent Threads: Tribute to Octavia Butler, Dark Matter: A Century of Speculative Fiction from the African Diaspora, No Police Know Police, and Red Indian Road West. Her plays about James Baldwin and Alberta Hunter have been produced in San Francisco and New York. Her new collection of poetry, Still Water, will be published in 2022 by Black Lesbian Feminist Press. Find her at www.jewellegomez.com

I grew up with my great grandmother and her daughter who were Ioway and Wampanoag. They were wonderful storytellers as well as voracious readers. So they were always telling stories about their pasts or about books they read. As a kid I was enraptured.

I didn’t consciously think about writing horror. I was writing a story about loneliness and retribution for abuse and then decided the main character was a vampire. Even then I wasn’t thinking ‘horror’ but, of course, it was simply a different kind of story in the genre.</p<

Do you make a conscious effort to include indigenous characters and themes in your writing and if so, what do you want to portray?

In The Gilda Stories I wanted a character who represented my grandmother who was so loving in helping my great grandmother raise me so I did include a Native character in the first chapter. Then in a later chapter that will appear in the sequel I use her stage name and character directly. I do it mostly to honour my family and keep mixed Natives from being invisible.

How do you feel the indigenous community has been represented thus far in the genre and what hopes do you have for representation in the genre going forward?

I think that like most oppressed communities the horror genre doesn’t come right to mind as a way to create. Our lives have been so steeped in real life horror it’s difficult to imagine how to top that. But more recently we’ve seen some interesting stories by Native writers who include that oppressive context as part of their story!

Who are some indigenous horror authors you recommend our audience check out?

Right now I’m loving Silvia Moreno Garcia, Stephen Graham Jones, Darcie Little Badger and Cherie Dimaline whose new book The Marrow Thieves, use a premise I love: when people are hunted for the very thing that makes them special!

We used to think there was no horror we could write about that would be worse than what we’ve experienced in this oppressive culture. I think what’s more important is to mine the things we’ve experienced and find the parallel horror that will express exactly how outrageous, terrifying and despicable the oppression has been.

And to the indigenous writers out there who are just getting started, what advice would you give them?

My family origins are Cabo Verdean, Ioway and Wampanoag but I think the advice would be the same to any group that feels the voice of their people has been silenced or ignored, especially if English is not your first language. Look to your culture and language for the strengths that helped your family, or you, survive. Don’t be shy about using them as the context for your stories. All of us have a rich cultural history which can be explored and celebrated. We all need to hear from each other to learn how to be better, stronger people.