Hope sprang eternal for my father, because every autumn, he’d take my siblings and I to our area’s haunted houses. Designed to raise money for charity and peopled by local talent, including many kids, these weren’t what one could call high theatre, nor were the scares elevated affairs.

However, since I was a child with a far-too-active imagination, I conjured all sorts of terrors.

There were the obligatory witches who feasted on the flesh of children. Headless Hessians mounted Nightmares. Mummies dragged bandaged legs to enact ages-old curses. Creatures, monsters, ghosts, and Dracula. Hammer-style bloodbaths and immortal killers intent on collecting little girls’ skins. And of course Zombies. To this day, everyone in Pittsburgh knows about Zombies, thanks to George A. Romero!

All year long, my brother and I watched Chiller Theatre hosted by “Chilly Billy” Cardille while my parents played card games with our aunt and uncle. We stole snatches of forbidden HBO horror films when we could. I harbored a secret crush on Vincent Price and dreamed repeatedly that Stephen King signed books in our back yard under our crabapple tree. (He was very nice, by the way, and I always brought him lemonade.) Kolchak the Night Stalker, The Munsters, The Addams Family, and Bewitched entertained us. We adored Scooby Doo, The Hardy Boys, and Nancy Drew. I boldly snuck my mom’s huge collection of horror paperbacks into my school books to enjoy during stolen moments. All of this fed my imagination, and I shivered with delight.

Yet to my young mind, the idea of actively being locked in a confined space where actual physical manifestations of all the ghouls and ghosties could touch me crossed a line. After all, what if an actual madman worked his way into the cast of performers? Who would know if the decorations hid actual murder victims? Mightn’t they be mistaken for superb props? After all, Tom Savini trains many of the local artists in FX makeup and practical effects.

I fought back hyperventilation as my fight-or-flight instinct engaged. While waiting in the queue, tickets for the attraction in Dad’s hand, I’d fight my urge to flee to the safety of our Nova where I could lock the doors and pretend the others weren’t about to be consumed by the Boogey Man.

Despite my resolve toward braveness, my fear must have shown. Dad would look worried. “Are you okay?” My brother would tease, “Nah, she’s a scaredy cat!” which I’d vehemently deny, though my knees knocked together louder than Don Knott’s in “The Ghost and Mister Chicken.”

We’d get to the door of the converted school, sometimes even step inside, but inevitably, I’d let loose a scream, apologize to my father through tears, and then high-tail it out of there.

Somehow, my father continued this lesson in futility, purchasing tickets for me year after year, comforting and cajoling, explaining, “I don’t understand. You read scarier stuff than this all the time!”

I’d shrug, unable to put it into words.

Now I’m an adult, and I risk losing all “street cred” by publishing this brief recollection. However, I admit it. I still dislike haunted attractions. I can intellectualize and know it’s safe fun, but I’ve too much familiarity with what can lurk in the shadows to feel at ease in such a vulnerable position. Besides, who’s to say those werewolves aren’t the real deal? And I acknowledge, at my age, I’ve tender flesh ripe for the reaping.

So, y’all can join my Daddy and take the risk. I’ll stick with reading, writing, and watching my horror.

Kerry E.B. Black writes from a swamp situated along the Allegheny River. She’s published a YA Paranormal Thriller 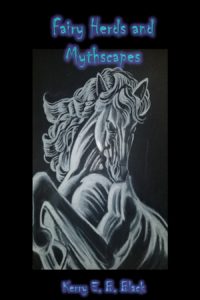 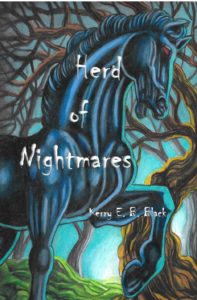 (Awakening at Equinox), Three collections of short scares (Carousel of Nightmares, Herd of Nightmares, and FairyHerds and Mythscapes), and is the featured writer in the recent Weirdsmith Volume 5. Some of her short tales have creeped into anthologies, magazines, and journals, and several have even been performed on Podcasts. Kerry’s works are available through Amazon, B&N online, Tree Shadow Press, at www.KerryEBBlack.com, and on the shelves of some fine independent booksellers, including Oakmont’s Mystery Lover’s Bookstore and Verona’s American Tattoo. Kerry enjoys interacting with readers on Twitter, Instagram, Goodreads, BookBub, and Facebook. 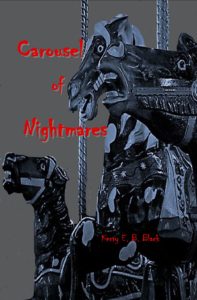